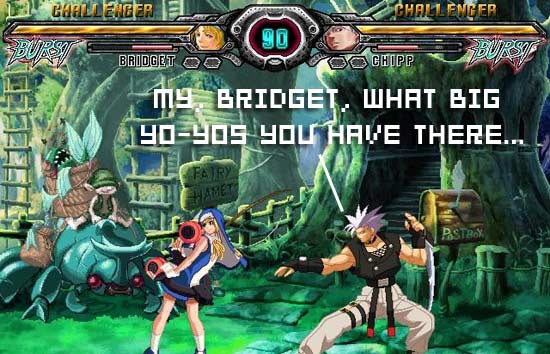 A while ago, I made a small mention in the community blogs about a special announcement from Arc Systems regarding the Guilty Gear series. While it wasn’t the anniversary collection that I was hoping for, IGN points to the new issue of Famitsu, which says that it’s Guilty Gear 2 is what the special announcement is. From their description, though, this is nothing like the previous games:

Action sequences feature what’s referred to as “melee action,” with players facing off against multiple enemies on the battle field. However, even though the game is no longer jsut one on one fights, you can look forward to all the aerial combos and super moves that you’ve come to expect from the series.

In addition to the combat, the game includes a strategy component. During battle, you can open up a briefing window. From here, you can plan your strategy for the battle field as a whole, placing orders for new units and sending orders to your current set of units.

You’re playing through the game as Sol, and trying to destroy an enemy fortress known as “Master Ghost.” More than anything, this sounds like Guilty Gear Isuka‘s 2-D sidescroller portion, combined with the “more than one enemy” bit that was in the arcade mode. As of right now, about 85% of the game is complete.

I’m anxiously waiting for scans of this issue of Famitsu (so please send them to the Destructophone!), so that I can be alleviated in my worries that Guilty Gear 2 is just going to be another Isuka.

There’s also some talk about the fact that the game is coming to the Xbox 360, and does this really mean much. As a Guilty Gear fan, I say no. I’ve been playing X2 #Reload on the original Xbox for a while, and it handles well — on the 360, the game should continue to handle just fine, and the online capabilities of Live will definitely support a strong competitive environment. Plus, Microsoft could have been courting them, so this will likely sell a few more 360s over in Japan.

[Thanks for the tip, Adam!]

[Update: GodLen provided us with a good-quality scan of the Famitsu page]