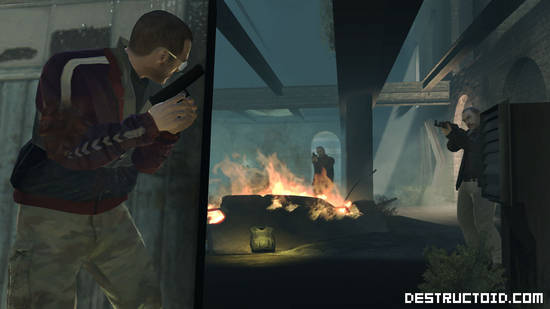 Rockstar is a pretty secretive bunch (no cameras beyond the steel doors that separate their offices from the outside, for instance), particularly when it comes to plot details, or the other subtle and hidden nuances we’ve come to expect from the Grand Theft Auto titles. After seeing and spending some time with Grand Theft Auto IV, we can understand why — as much as you already think you know, and as much as Rockstar have allowed us to tell you, there’s stuff about this game that is simply going to blow your mind. It’s that surprise and that experience that Rockstar are trying to protect when they act so cagey when it comes to answering questions about their game.

When Rockstar invited us out to their New York City offices to get some hands-on time with Grand Theft Auto IV, I had a good idea of what I was in for. I certainly expected the game to be good, and with the game slated to hit shelves on April 29, I most definitely anticipated it would be pretty polished. We weren’t disappointed, and even though we were only given a taste of the single-player experience, there’s still plenty to talk about.

So today we kick off our weeklong GTA IV coverage, with “Shooting and cover, Grand Theft Auto IV has it,” which — surprise! — focuses on the game’s revamped shooting and cover mechanics. Hit the jump to find out how it may change the way you see GTA.

Rockstar redefined a lot of things for videogames with Grand Theft Auto III on the PlayStation 2 — the open-world experience, the sense of freedom in gaming, and even the significance of a solid licensed soundtrack. But for a game that has received the most notoriety from firing bullets into everything from gas tanks to police, and even hookers, no one was really writing love letters to Rockstar about their shooting mechanic.

The over-the-shoulder, close-camera style of aiming found in Resident Evil 4 (and later, Gears of War) has forever changed the way we’ll be playing third-person shooters, and Rockstar have obviously been paying attention. GTA IV’s central character Niko Bellic seems to be much more comfortable with firearms than any of the protagonists in the previous games, and it shows through in the gameplay. Pulling the left trigger to the halfway point brings the camera close over Niko’s shoulder, and it brings up a reticule for free aiming with the right analog stick. In this mode, anything can be targeted – like pedestrians, cars, or birds — and it still gives you the level of freedom found in previous games. Overall, the targeting seems much tighter and certainly more precise than that found in previous games. 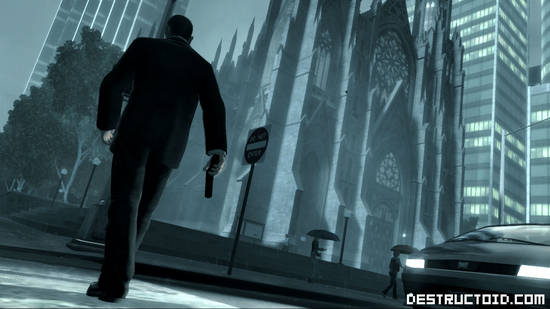 The game also takes notes from the book of Crackdown, and implements a lock-on targeting system. By pulling the left trigger in completely, the game will automatically lock on to your nearest aggressor. Note the word “aggressor” — the game will not auto-target pedestrians, so you won’t find yourself unintentionally targeting a terrified Hasidic Jew or someone’s grandmother during a wicked firefight. Interestingly, you can actually aim within a lock-on, so targeting the legs or nailing a headshot is made a little less frustrating in the hectic situations that often occur in the world of GTA.

For the most part, the auto-targeting worked nicely, and was pretty intelligent in choosing the appropriate target in any given situation. If for some reason it doesn’t, you’re also able to cycle through aggressors using the right analog stick. The game did suffer from the dreaded “still locking on to a dead body” syndrome that you see in many other games, but it didn’t seem to be a deal breaker (simply release the left trigger, and pull it again to re-focus), and there’s still hope that will be tweaked before the game’s release.

For the first time in a GTA title, the game also features a cover system, one that feels to be quite similar to Uncharted: Drake’s Fortune. In order to get a grasp on how it works, we’re directed to an early “tutorial mission,” called “Concrete Jungle.” In this mission, we meet up with one of the game’s main characters, a Jamaican named Little Jacob, who wants us to … we have no idea. Between his thick accent and the fact that he’s perpetually high as a kite, he’s virtually incomprehensible. In fact, many of the conversation end in Niko giving a tentative and confused “Uh, ok,” a phrase you’ll likely be uttering yourself the more time you spend with Jacob. 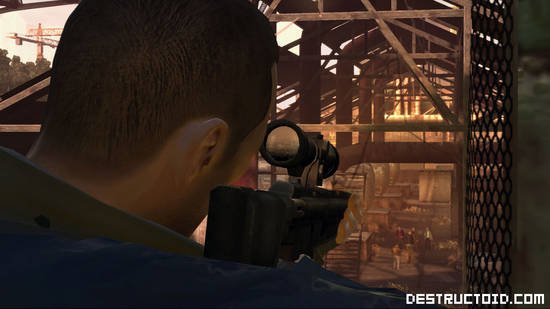 We’re pretty sure whatever he asks us to do, it involves shooting at drug dealers, because after a short car ride, that’s eventually what happens, and it provides the perfect opportunity to learn the game’s cover system. With Jacob by our side, we approach a residence and start firing away. By approaching a wall and pressing the right bumper button, you’re able to snap onto cover. You can shimmy back and forth, and poke your head out to fire at will. It’s also possible to blind fire around corners and over objects, but it’s significantly less accurate, as expected. Niko also seems pretty intelligent when it comes to cover. At one point we see him slide up on his knees to a cover point behind a couch, and shimmying along the front of the residence, he wisely ducks beneath a window.

This was also a great place to show off a pretty vast progression in the series, environmental destructibility. Whether the people we were firing at were the good guys or the bad guys it makes no difference — they’re going to have to find someplace else to live. We shatter their window with our bullets, tear through furniture, and watch plaster fall off of walls. All cover is not created equal — one of the drug dealers hides in the kitchen, standing behind a weak pillar that’s being shattered and worn to shreds by our firefight. This eventually exposes a hole in the pillar, and I’m able to target and drop a well placed slug in the dome of my assailant.

One drug dealer remains, and then we learn a valuable lesson about firing rocket launchers inside enclosed spaces. It seems like a stupid but fun idea so we fire away, directly at the kitchen, and it meets its mark. It obliterates everything in the room — tables and chairs are knocked over, and there’s a bit of a fire smoldering. The drug dealers are dead, but so is Jacob, and so am I. Mission failed.

Consider this the first ever GTA IV tip before the game is released —  as tempting as it might sound, don’t use a rocket launcher to complete the “Concrete Jungle” mission.

This is part one of our five day Grand Theft Auto IV spectacular fun fest-a-thon! Check back tomorrow at 1pm EST for part two: