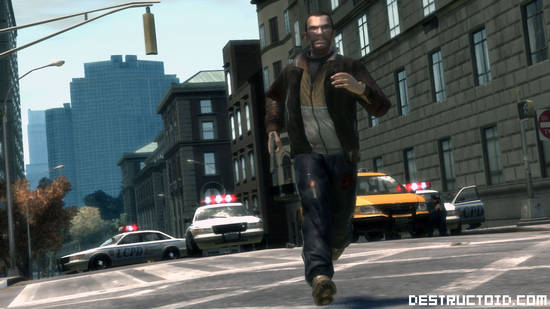 If you think you’re getting hyped for Grand Theft Auto IV, put yourself in my shoes. Last week, I had a chance to kick back and spend some time with Rockstar Games’ upcoming title, seeing some of the game’s new features first-hand. I’ve had a taste of the future of GTA. Unfortunately, they wouldn’t let me take it home, despite

So I’m doing the next best thing, which is going back and playing some of the older games. This might be all fine and dandy for those who haven’t played GTA IV yet. You can convince yourselves that the experience is similar enough that it can hold you over until April 29, when the latest installment of the series lands on shelves. But don’t be fooled — the experience of GTA IV is truly leaps and bounds above that of the previous games. You know what they say: “Once you play GTA IV, you may not be able to play the other games anymore.”

OK, so no one says that (and I’m sorry I just made you cringe). But it may just be true. Today I’ll take a look at the new ways that police and wanted levels work in GTA IV. 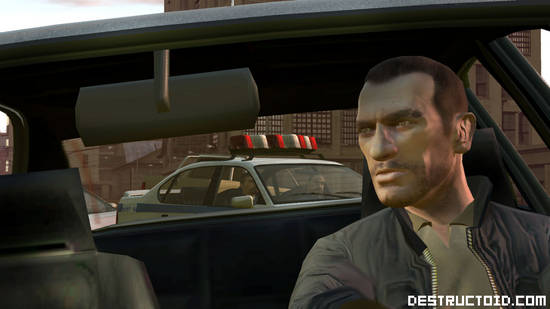 If you’re like most people who’ve played any GTA game, you’re more than likely to have been mixed up in an in-game car chase with law enforcement. Maybe you’ve botched a mission and caught the attention of the authorities, and your two-star wanted level has them sending an aggressive pack of squad cars after you. Or (and this is more likely), maybe you were feeling particularly twisted, and you decided to go on a virtual killing spree, taking out pedestrians and police with no regard for their digital lives. Now, with a six-star wanted level, you’ve got choppers, armored cars, and the proverbial kitchen sink trying to take you down.

In previous games, you’ve had a few options. The first would be to high-tail it out of the area, laying low where police can’t see you, and minding your Ps and Qs; eventually the authorities will give up their search. Another alternative would be to find “bribes,” floating star icons hidden throughout the city, or even have your vehicle repainted at a “Pay N’ Spray” — both options will immediately absolve you of your sins. Your final option? You try to keep up a suicidal rampage until it takes you to your death.

Those are all great options (except for that death thing, which is kind of a bitch), but things work a little differently in GTA IV’s Liberty City. To start, while you haven’t (and likely won’t see) a HUD in any of the screenshots or video of the game that Rockstar has provided, it’s there. It should be noted that the HUD in GTA IV is much more minimal that in the previous games; gone are the larger, cartoon-like icons that littered the screen in prior GTAs. The wanted levels are back, and appear (along with your current cash holdings and selected weapon) in the upper right-hand corner of screen as a sleek display. This portion of the HUD is small and understated, appearing only as white with a black outline. 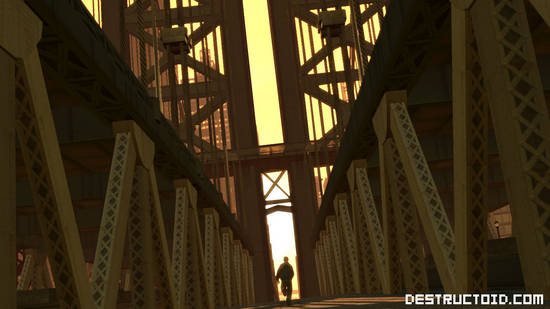 The lower left hand corner is home to the map and radar system, which plays a significant role in how police chases go down in GTA IV. For starters, any crime you commit will cause you to receive a wanted level. Because this new version of Liberty City feels and acts as a living, breathing world, pedestrians who see you commit a felony will alert the authorities. Gone are the days when you can pull open any parked car door and drive off into the sunset — that’s not going to cut it in GTA IV. That said, this doesn’t apply to traffic laws; feel free to break them as you see fit, but don’t be surprised to see a cop flash his or her lights at you if they see you doing so, if only to remind you that you’re there.

But if breaking traffic laws doesn’t scratch that criminal itch — you want to steal cars, kill pedestrians, or just be a general nuisance — you’ll need to become familiar with just how to flee from the law. When police are in search of you in GTA IV, you’ll see a red flashing circle appear on the map; the nastier your crimes, the more stars you’ll receive, and the bigger the radius of the circle will get. The objective here is to escape the radius, at which point there will be a cool down period, and you’ll have to lay low while your wanted level flashes and will eventually disappear. Catching the attention of the authorities, or even committing another crime, will cause the radius to re-center and this chase will start all over again.

Truthfully, this feels like a new game in itself, and unquestionably gives you a better sense of objective during these cat and mouse moments that have become a signature of the series. Having recently spent time with the previous games, escaping the police sometimes felt like a chore, particularly because you’re given no clear destination or goal that would lead to a “win.” While chases with a larger radius could have you aimlessly tearing ass all over the city to escape a radius, it looks like this new system will give these sequences a much tighter feel. 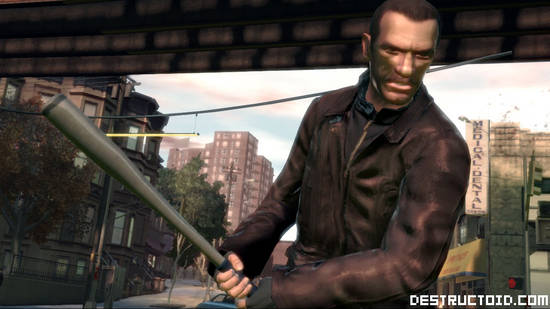 But that doesn’t mean that the chases are going to be any less intense. The police that populate Liberty City are more aggressive and intelligent than ever, and we got ourselves into more than a few precarious situations during our hands-on session. As police chased our car through the streets of Algonquin (Liberty City’s version of Manhattan), we were able to tap a single button to let us smash out a window with an elbow, allowing us to hang from the car and aim a firearm at our pursuers. But we had to be careful, because depending on where we were aiming, the camera would shift in such a way that made it difficult to see where we were driving.

Not surprisingly, we crashed our vehicle, which we immediately abandoned, and attempted to surrender to the police. By pressing the “B” button, our character Niko Bellic put his hands up in a show of defeat. As the police approached to put on the cuffs, we pulled out a gun and started to begin the chase again, giving us an upper hand and a better likelihood at an escape.

You didn’t think we were going to give up that easily, did you?

This is part three of our five-day Grand Theft Auto IV spectacular fun fest-a-thon! Check back tomorrow at 1pm EDT for part four, and in the meantime, don’t miss: