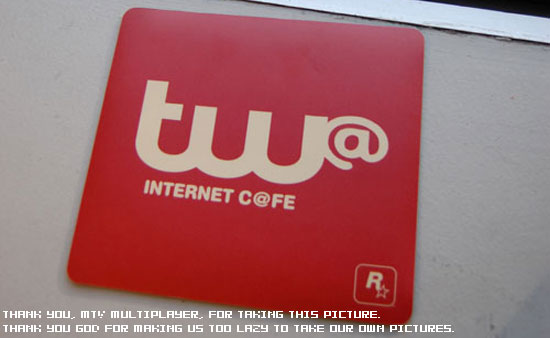 The good news is that you can win stuff! Rockstar sent along a nifty package of GTA IV swag and we want to give some of it away to you! While at Rockstar last week, we had a chance to form a four player team to go head-to-head with Liberty City’s version of the S.W.A.T. team, N.O.O.S.E., in GTA IV‘s “Hangman’s NOOSE” cooperative mode. We know what S.W.A.T. stands for (Special Weapons and Tactics), but we’ve no clue what N.O.O.S.E. mean, and no one could really tell us.

So winning is simple: tell us what you think (or know) “N.O.O.S.E.” stands for. We’ll take our top five answers and randomly select one winner to receive the GTA IV swag bag (which includes a [email protected] Internet Cafe mouse pad, a Liberty City pin, and more). We’ll be poking through entries on Sunday evening, and the winner will be announced on Monday, April 13. One entry per person, and it’s your first entry that counts, so make it good! The more outrageous the better.

[Image courtesy of MTV Multiplayer who received a similar box of GTA IV swag, and thus made it unncessary for us to pull out our camera.]