[February’s Monthly Musing asks you to tell us about a game you keep coming back to and replaying. For his Monthly Musing, Eprahim talks about the criminally underlooked Vampire: The Masquerade – Bloodlines. Want to see your own post on the front page? Start writing a CBlog on this month’s topic now. — JRo]

I have had quite the experience with Vampire: The Masquerade – Bloodlines. Imagine if the guy at the club that gets all the girls yet doesn’t even bother with them and is unable to pursue a relation acted that way because he had lost a person dear to him. Imagine if that person dear to him was a girl he never thought he could love as much. Imagine them having mind-blowingly good sex every single time they got near something that looked suitable for the act. Imagine if one day this girl just disappeared, leaving only a note for our poor guy saying “I love you”. Imagine that guy being more dead than alive for an entire month. Now switch the “all the girls” with “video games”, “lost” with finished and “person dear to him” with Vampire: The Masquerade – Bloodlines. Yep, sounds just about right.

I fucking hate Vampire: The Masquerade – Bloodlines. I’ll tell you why below.

Let me start by saying, I am a huge fan of Deus Ex. Imagine my thoughts when I learned sometime during 2009 about the existence of this game. It was a pretty underground game, mind you – reviews gave it 70-80ish score (which isn’t bad but usually doesn’t mean anything extraordinarily special either). Apparently it was full of bugs at release, the majority of which were solved through a dedicated modder making an unofficial patch. There was quite the underground cult for this game, it seemed. I decided to give it a try, though – while not being a fan of Troika’s work that much, I did enjoy Arcanum. And I was curious at what they would do with Tim Cain playing a marginal role. Also, I wanted to see how the game would be – every single FPS/RPG I have ever played falls into either two categories: “bad” and “really fucking good”. Turns out Bloodlines was part of the latter category.

The first thing that strikes you as soon as you start up the game is the genius of the writing. I really mean this part. The writing in this game is absolutely FANTASTIC and is personally speaking the best use of the videogame medium I have ever seen in my entire life. And funny thing is, the plot isn’t even that spectacular. It’s no Planescape: Torment. Hell, it’s no Mask of the Betrayer and it’s no Warcraft 3 either. The very basic plot is: you are turned into a vampire by some girl/guy you met in a bar (belonging to one of the clans that will shape who your character is going to be) and you start climbing the ladder of the “polite vampire” society, mostly by investigating some matters on an old sarcophagus with mysterious powers.

But man, the writing. That writing. In the comparison I used earlier about the disappeared lover, the writing would probably be the way the girl kissed. It’s just … godly. Every character in the game is extremely interesting and well-developed (godspeed, Fat Larry), the humour in the game is absolutely fantastic (rare example of video game that actually had me laughing in tears at it), a few very well-placed mindfucks here and there and an awesome TWEEST at the end of the game by the greatest troll to have ever appeared in video games I’m not going to spoil (everyone needs to experience it). Also, everything Jeanette, a vampire that owns the club Asylum with her sister Therese (Jeanette is the girls-just-want-to-have-fun type. Her sister is the cold, calculating one), says is pure seduction material.

One thing’s for sure: the writing sticks with you forever, no matter what. Anyone who has played the game is going to remember at least a couple of quotes randomly thrown at him. It’s just so cleverly written.

Oh, and Malkavians are an extremely funny clan to play as, mark my words. They’re basically the guys for which the human-vampire transfusion didn’t go as well as planned and they lost some common sense in the process. It’s not just “batshit insane”, it’s “genius batshit insane”. Wouldn’t reccomend them for a first playthrough, though. Unless you want to understand less of what’s going on (even though they have some special powers that can make them pick up extra plot details like a huge yet hidden mindfuck towards the beginning of the final part of the game. That makes Malkavian the perfect race for a second playthrough). 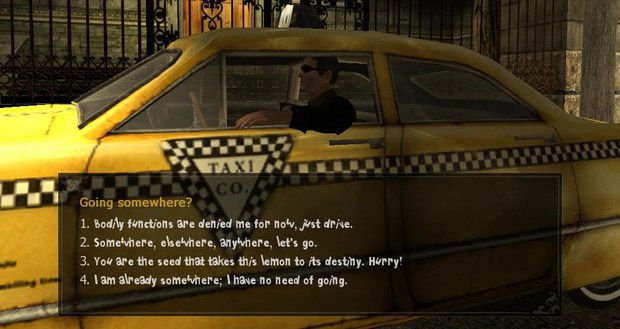 When I first fired up the game, I was unsure on what to choose as in, “what character to play”. There were many. It looked pretty varied. Then I thought “Oh, hell. I’m overthinking it. In the end race will probably change nothing and these fancy abilities are probably just there for the sake of it”. I decided to roll a Toreador, the seductive vampire, and I was happy to learn my initial thought was wrong.

There are seven clans you can choose from: Brujah, Malkavian, Nosferatu, Toreador, Tremere, Ventrue, and Gangrel. Each clan has completely different abilities which makes up for many, many different playstyles. This makes for seven radically different ways of playing it, with variations on how you can play each particular clan member. That’s quite a lot.

You remember how one of the huge problems “multiple-approach” RPGs have is the extra experience gained from defeating enemies that stealthy characters or speech-based characters don’t get? It’s all fixed here, folks. You get special XP prizes by fully following a particular path (example: get in the museum without killing any guards, get a 2XP bonus). It makes up for a far more balanced game.

Bloodlines is a FPS/RPG centered around multiple solutions to obstacles like System Shock 2 and Deus Ex. Thanks to a few really clever design choices – a speech-based playthrough is possible… at least for 3/4ths of the game. The final quarter of the game had to be rushed due to the publisher (“good” old Activision) bitching, and even after that there was no time to fix the rest of the bugs.

It should also be noted that the game designers managed to fit in an extremely varied array of situations. The Ocean House hotel is still the most terrifying thing for me after Amnesia: The Dark Descent. I’m afraid every single time I have to go through that cursed hotel. 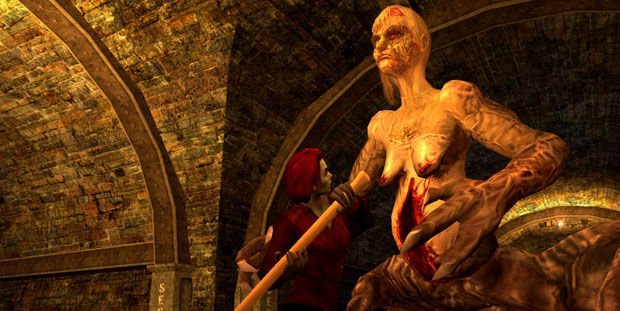 I’d like to also spend a couple of words about the different sidequests of the game. Those are probably where the humour of the game truly shines. Everything is covered by a thin veil of dark humour and satire. Go figure that there’s a quest in which you have to help a Japanese schoolgirl in defeating an evil fish demon (You even have the choice of mentioning tentacles towards the end of the quest…), filling in your typical anime and manga stereotypes. It’s much funnier than what it sounds.

Back at the beginning of my blog post, my comparison wasn’t all that metaphorical. My conclusion of the game was quite … dramatic. Well, a silent kind of “dramatic”, but still dramatic. Basically, I had finished the game. Got one of the “good endings”, everything was good. Only one thing came to my mind when the credits rolled, maybe a mixed consequence of the awesome twist at the end and remembrance of all the fucking great memories I had with the game: “Fuck yeah”. That’s all. Just those two words. Once. I couldn’t think of anything during the credits except feel awesome for having experienced such an amazing game.

After that, some time passed. A day became a week and eventually a month. A month in which, well, I couldn’t play anything. Not due to lack of time, mind you. I had so much time I was exploding with boredom. But … every time I tried to turn on a video game, I played it for 5 minutes, said “nah” and then turned it off. And my Steam library was just begging to be played. What was happening to me? Why did I lose all my will to play video games? And that’s when it came to me.

I realised I fucking hated Vampire: The Masquerade – Bloodlines. I hated it because it killed gaming for me. It was just an experience too good to be compared to anything else.

Do I play video games right now in my life? Yes. Do I enjoy them? Yes. But … they just don’t feel as good as they used to be. Even the old ones, the one I used to love all day… they’re not what they used to be. There’s only one single way for me to feel as enthusiastic as I used to be – in the same mix of memories that assaults some guy who comes back to the beach where he used to go on summer vacation as a kid only to find his favorite arcade cabinet still there and working, I fire up Bloodlines again. Maybe it had dissapeared briefly from my hard drive. Happens.

But it was still there, always there. In my mind and heart. In my memories.

You know, there is a pretty old saying that goes around for Deus Ex and Bloodlines:

Everytime you mention it, someone will reinstall it.

I can only hope this blog post has had that effect on someone.