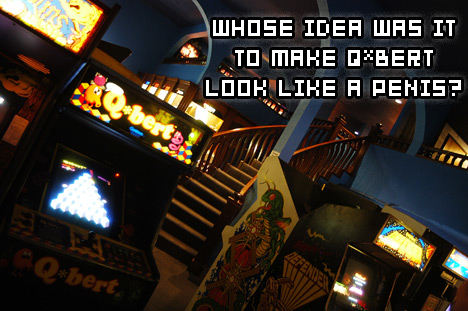 For years, the traditional arcade has been dropping steadily off the map. Where once you couldn’t swing a dead joystick without hitting kids ripping off their parents wallets for a bag of pot and an afternoon spent playing Robotron 2084 (with accompaniment courtesy of Geddy Lee and the boys), you now have an entire generation growing up without having ever even been to an arcade!

To combat the menace of shrinking returns and to capitalize on the new-found substance fondness of a generation raised on ironic Voltron shirts and the music of the Spin Doctors, many arcades have metamorphosed into a sort of hybrid club/bar/arcade. Recently, I sat down with Anthony Ramos, co-owner of Portland’s Ground Kontrol, for an interview as to why the arcade scene has fallen apart, and why booze (the cause of, and solution to all of life’s problems) is such a handy cure.

Nex: It’s been said that the fall of traditional arcades throughout the last decade was a result of more powerful gaming consoles bringing the arcade experience home. Do you agree with this?

Anthony Ramos: Technology becoming cheaper and more widespread had a lot to do with it, sure. Up to about the mid-80s, you HAD to play these games at the arcade, department store, bowling alley, or some other public place just because they were too expensive for anybody but Ricky Schroeder to have at home. Now, home games are just as sophisticated, if not moreso, in both technology and design, and the original arcade games are on home computers, cell phones, websites…

I wouldn’t say any of these alternatives provides “the arcade experience,” though; only a real arcade can do that. I once set up real arcade cabinets and old-school consoles at home, installed night lighting, played ’80s music, everything. But, as they say, it just wasn’t the same.

The “arcade experience” is all about social interaction. It doesn’t really matter how new or fancy the games themselves are. The game of billiards is hundreds of years old, but people still get together in pubs to play it.

Nex: Why, in the age of utter arcade decline, does GK do as well as it does?

AR: Ground Kontrol survives because we constantly adjust it to provide an experience people can’t get any other way. This was easy for the original arcades: they had a monopoly on the game technology. With all the alternatives available now, the niche of opportunity for an old-school arcade is tight, and shifts as the gaming landscape grows and changes. We work hard to find new elements people want, and religiously preserve features that make it unique.

Nex: Will arcades, in the traditional sense, ever make a comeback? If so, how?

AR: I would personally enjoy seeing independent “next-generation” arcades spring up around the country. A few bars around town have become GK-like by adding home gaming to the bar experience.

Opening another GK would require an incredible amount of sacrifice on the part of anyone who attempted it, though. There would also be little chance of financial return. If Ground Kontrol had to pay for all the labor and expertise its owners sink into it, it would cease to exist pretty much immediately.

Nex: How many people have fornicated in the Pole Position machine?

Nex: Booze; good for arcades or preventative measure against
obsolescence?

AR: Adding alcohol service was just the next step in a natural progression. Our customers asked for it, and our building had the fixtures in place to provide it. Good thing we preserved them during the initial renovation!

It’s good from a survival standpoint, too. Making money in multiple ways means we don’t live or die on the popularity of any one feature.

It’s not 100% secure, though; we have to compete with other bars for the public’s time and money even more than on the arcade side. Fortunately, our live show and DJ lineup is solid enough now that people are taking Ground Kontrol seriously as a place to see a band, not just play games.

Nex: If you had to choose a Corey; Feldman or Haim?

AR: Feldman, no contest. A better challenge would be Corey Hart. Don’t switch the blade on the guy in shades…

(Editor’s Note: You can find Ground Kontrol at 511 NW Couch St, here in apathetic Portland, OR. If you have the means, I highly recommend it.)