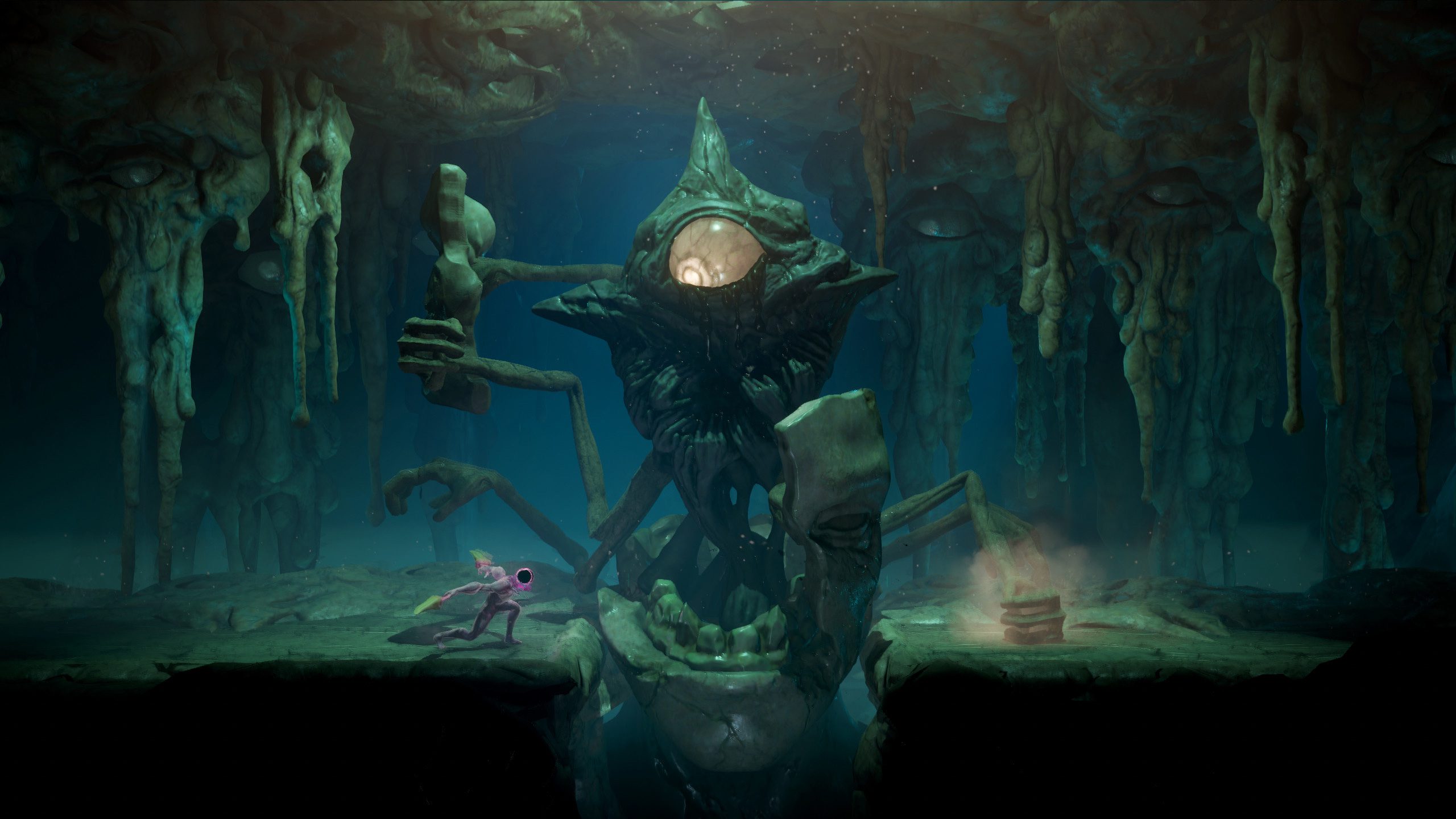 GRIME, a freaky creature-absorbing action-RPG romp, captured our imagination last year. I’ve been following along ever since, and just in time for E3 2021, there’s a new demo to play at home. Right now. Ever wonder what it’s like to have a black hole for a head?

Destructoid can exclusively reveal that the GRIME demo will be playable on Steam today through June 22. (It’s a huge demo week with Steam Next Fest and Summer Game Fest.)

What you can expect: the first area in the game (the Weeping Cavity), a boss encounter, and tease for the next zone. The demo content is primarily a warmup — in particular, it’ll highlight the Absorb mechanic that’s used to “collect enemy traits” — but there will be “a variety of weapons from very fast to very slow,” and even some hidden items, too.

Ahead of the demo’s release, we also sent over a few (okay, more than a few!) questions to developer Clover Bite. In our Q&A, GRIME director Yarden Weissbrot spoke with us about making a surreal world that feels justified, the origins of the “black hole” protagonist, how progression works, what to expect from the difficulty, and more. 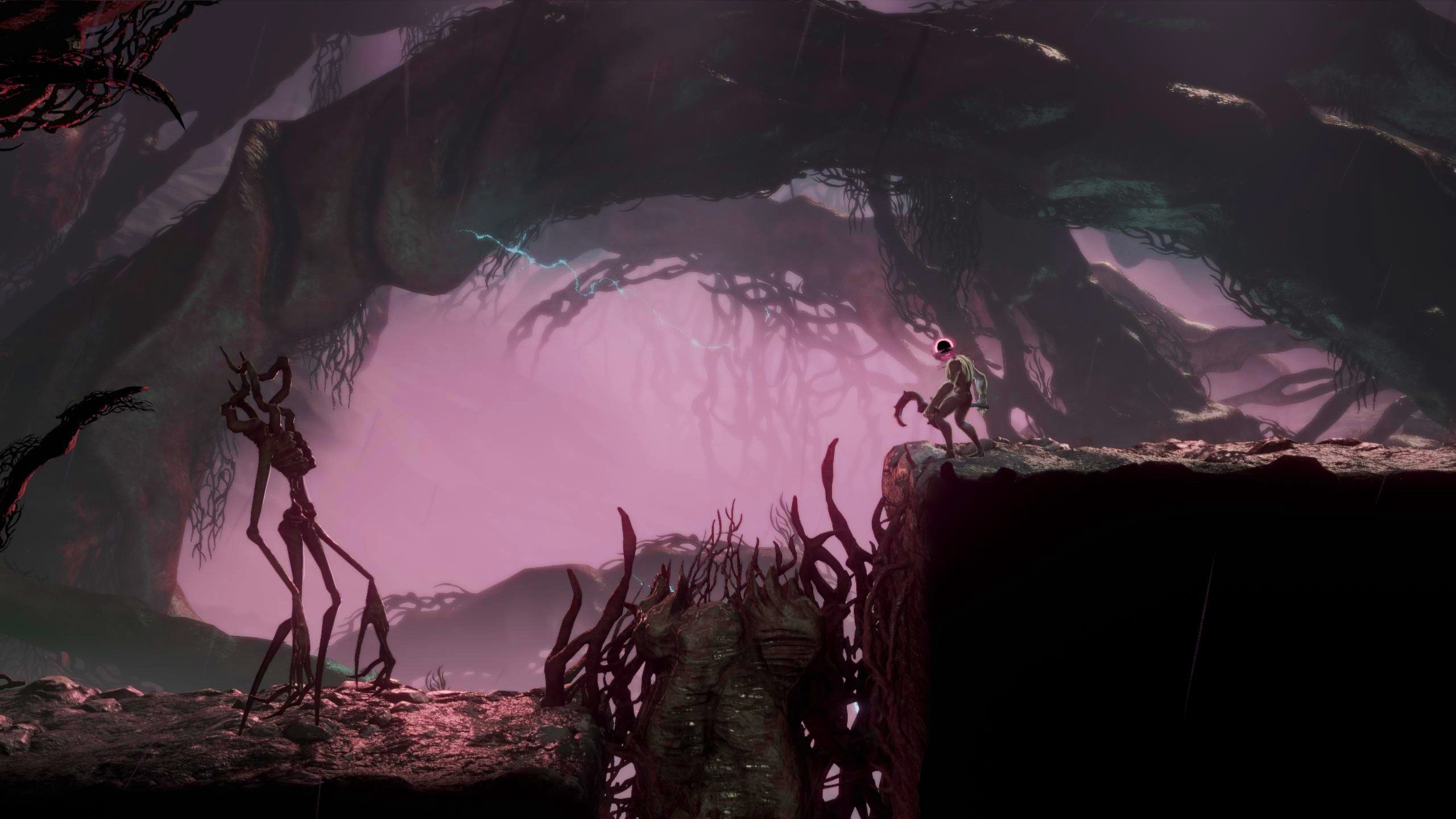 Worldbuilding and the risk of weirdness for the sake of it

“Initially I wanted to do something more religiously inspired after falling in love with Peter Mohrbacher’s Angelarium and Wayne Barlowe’s Hell art and books. That’s when I drew the very first concepts for the game, which were the giant faces strawn in a desert, the Rockheads, and a Hand creature which hasn’t been revealed yet.”

“Personally, I don’t really think there is such a thing as too weird. I mean, as long as there is a method to the madness, and everything is consistent and abides by the rules of the world that have been set up, I think you can do anything. I think it’s important to not do something strange purely for the sake of strangeness. It should be something that would make sense to have organically been born from the logic of the world, rather than something that could end up feeling forced for the sake of a reaction.”

“I was fortunate that everyone on the team trusted me enough to let me lead and followed my concepts even as they grew stranger and stranger. So brows were raised, but at the end of the day, they always followed through.”

The origins of the black hole and gameplay inspirations

“The story of how I’ve ended up with the black hole character is a little more convoluted. This being our first game, we’ve taken Salt & Sanctuary as our main reference for the basics of combat and movement. Due to my lack of experience, I was terrified about deviating from what other, more successful and more experienced developers had made. It’s a great game and I was certain we couldn’t surpass it from a gameplay perspective, so I stuck to S&S as a guide. ”

“A few months later, I finally got around to getting a PS4 and playing Bloodborne, the only Souls game I hadn’t played at the time, and came to enjoy the addition of parrying for the first time through it, and how it spices up the Souls formula. But, I didn’t want to risk the project and everyone’s faith in me for a sudden fancy of a mechanic I only recently have grown to like. However, shortly after the Sekiro announcement trailer came out, I became obsessed with analyzing it and figuring out how parrying works in it, along with others on r/Sekiro. I realize this may sound silly, but it honestly felt like I got permission to make parry the central mechanic for the game now that From Software did just that.”

“So, from there, I thought about what could work for giving the parry a unique look that has never been seen before. That’s when I sketched this ugly doodle while trying to convince the team.” 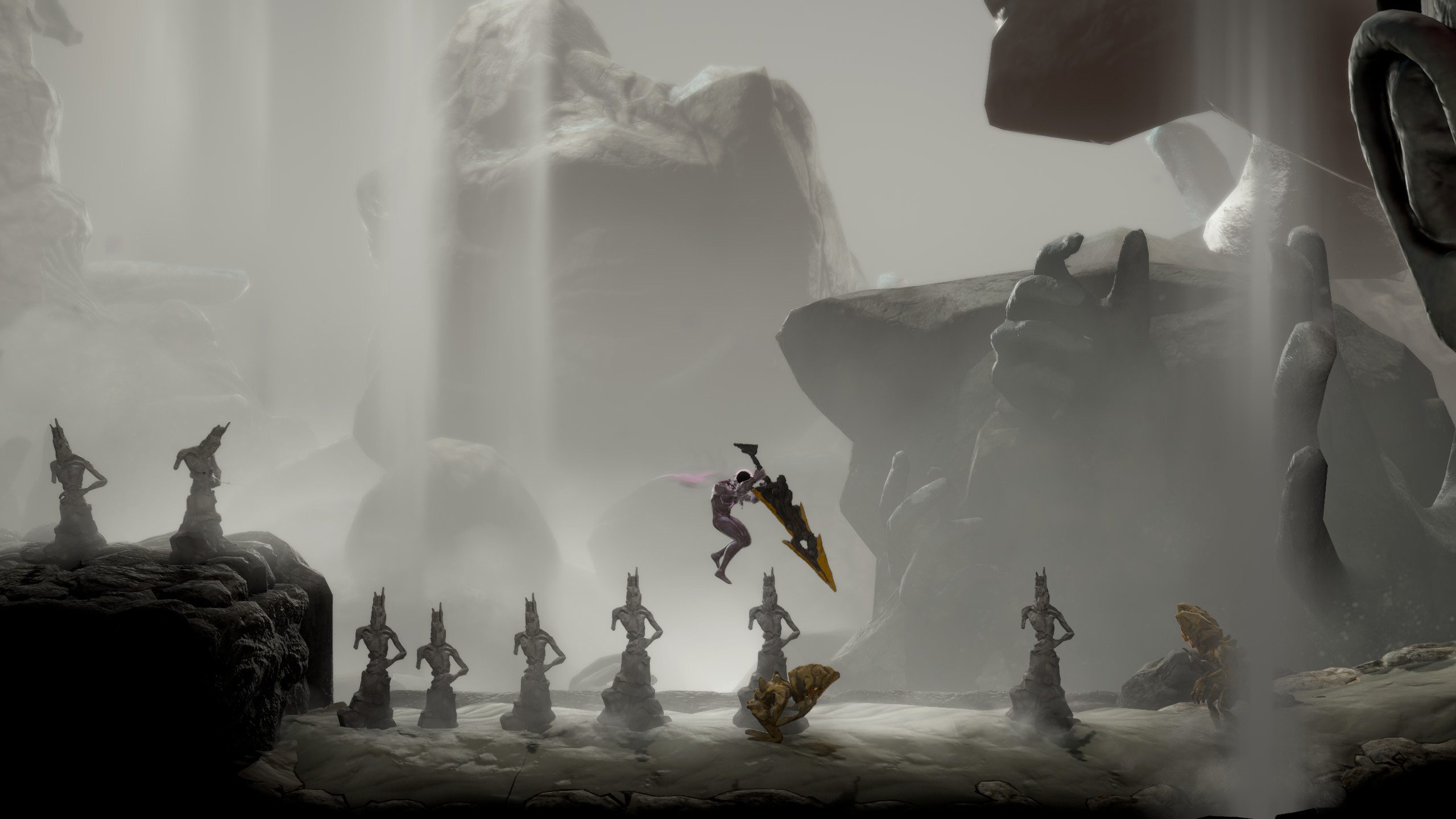 A weapon for every playstyle

“There is a large variety of weapons in GRIME and each one is unique. Some general movesets are shared between weapons, but all of the weapons have their own special attack. This can range from a spinning leap, to drilling through an enemy as you hold down the button, to even using the move to avoid an attack, which in turn empowers you.”

“There are also some unique weapons, like the lanterns, which are unique to Resonance builds and deal mostly indirect damage through their debuffs. There are weapons of all speeds, but each one was designed and balanced to serve players from beginning to end, much like in Bloodborne. The goal is for every weapon to find a home with a player that really likes their behavior and quirks.”

“Some elements of progression were also inspired by Sekiro. I really liked how you could discover tablets that grant you new talent trees. The fact that I could’ve missed them, the mystery of what talents I have found and could still find, served as the core of the Hunt and traits system.”

“Basically, killing an enemy with an absorb consumes them, and after consuming a type of enemy several times you unlock their trait. Traits can range from being able to absorb enemies from a distance, or have your dashes leave an echo that damages enemies, or even change your basic heal from a quickly triggered regeneration, to a powerful charged burst. Traits can be upgraded, and can usually be upgraded up to six times. In order to level up traits, you need to get Hunt points, which are typically dropped from challenging enemies that do not respawn upon defeat. The idea was to have the player want to fearlessly hunt down enemies, both weak and strong, both for the challenge and for their added power, like the predator they are.”

“In addition, you can level up the more typical attributes of Health, Strength, and Dexterity. Though, there is the Resonance attribute which is for a more… unorthodox style of play, using damage-dealing traits and stacking debuffs on enemies. Oh, and of course, there are also the abilities you gain from consuming bosses, all of which add further depth to both traversal and combat.” 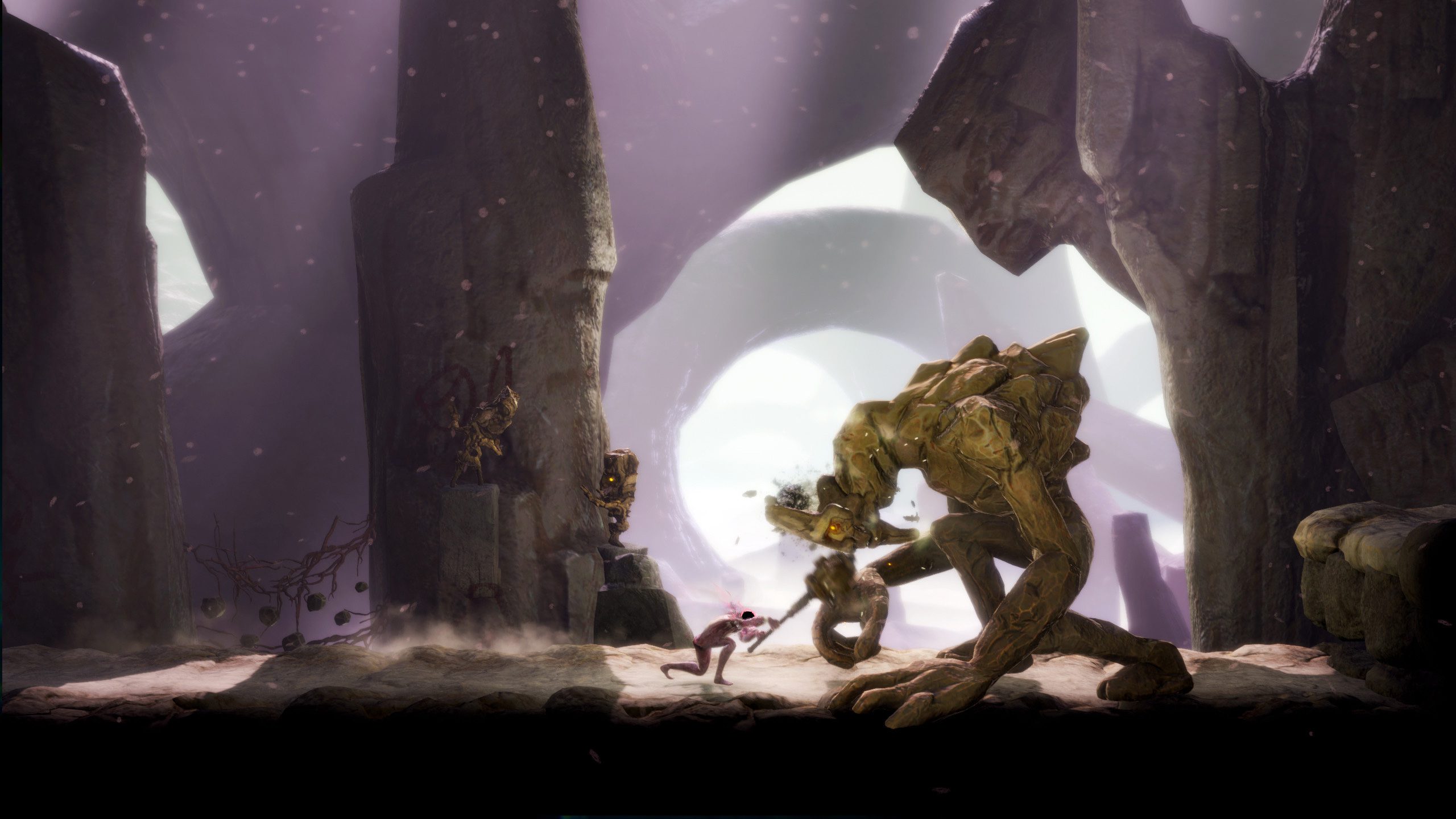 “GRIME is definitely more challenging than most games, though we’ve had plenty of testers unfamiliar with the Souls games or really difficult games in general, and they ended up finishing the game. I would say the bosses will probably be the hardest part, especially near the end of the game. You could definitely garner a lot of additional power from leveling, investing in Traits, and hunting down the most challenging prey available.”

“There is a lot of prey to defeat and consume in GRIME, and a lot of it is optional. For example, all mini-bosses are optional.”

A metroidvania’s best friend: the bestiary

“Honestly, I didn’t want to do one in the beginning. We were only five people for the majority of development and with so little manpower to spare, and no one having any experience with creating UI or writing, I preferred to try and avoid these two things as much as possible, since I believed it would be better to not have it than have it be subpar. But after reading a lot of the comments in indie game subreddits where people spoke about what they liked about these kinds of games, bestiary came up very frequently… so here we are! Hopefully it will be something people appreciate as it honestly took a lot more work than I initially thought!”

“There is a ton I would like to talk about, but it is best left a secret until it’s discovered in-game. All I can say is… the game feels very different by the end from how it begins, and I hope that’s something people will like and appreciate.”