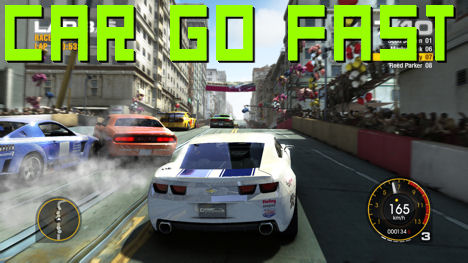 GRiD‘s first patch has just hit the PC and can be downloaded here if you’re a racing fan who also … I don’t know … really enjoys patching software? It’s hard to be irreverent all the time.

The patch is only available for the PC-DVD version of the game at the time of writing, meaning those who downloaded the game via Steam, Metaboli or Direct2Drive will have to wait a little longer. Codemasters promises that a patch for those versions will arrive “within days.”

Hit the jump for the full patch details.

Network bug fixes
• When viewing in spectator mode – wheels should now turn correctly.
• Session searching now functions correctly when there are lots of full sessions (PC and PS3).
• Track and route options no longer change when host gets back to lobby in private/LAN.
• Race results are now correct if a host migration occurs at the end of the race.
• Other player’s progress/positions are now correctly updated when you enter the race results screen.
• Several NaN (brown screen) related fixes.
• Fixed a problem whereby it was only possible to upload one world record ghost to each track (PC and PS3)

Network – general
• Race to race lobby timer is now 15 seconds
• A timer has been added showing how long the session has been up and running is shown on the tickertape after joining a session.
• Changes to what is displayed in lobby when a player has kick votes.
o The player who has been voted for can see this fact and the number of votes they have received.
o Players who have voted to kick someone can see who they voted for but cannot see the number of votes.
o Players who have not voted do not see anything.
• Added ability to get the next page of sessions in private session results (PC and PS3)
• Banned sessions no longer appear in private session list.
• Reverse gear is now disabled for the first two seconds of a network race to stop players reversing off the start line.
• Added ability to change collision types in all sessions (not enabled in Demolition Derby).
o Forward Only (this is the normal behaviour for Ranked/Unranked)
o On (Collisions are always on)
o Off (Always off).
• Numerous anti griefing checks to turn off collisions when players are griefing.
• Fix for distance shown in distance online stat.
• A warning message is now shown the first time you enter system link.
• In non-drift races, the race results screen shows the fastest lap that each player achieved in that race.
• When a player retires or terminally damages in race, a message telling all players of this fact is sent to the chat system so displayed in the overlay in game.
• Cars become semi-transparent when collisions are turned off due to griefing.
• Improvements to prediction system to reduce effects of lag when players are close by
• Fix for occasional excessive smoke coming from other players in network mode
• Fix for exploit where a player could upload an incorrect lap time
• PS3 & PC – fix for a problem where private sessions would not show up in search unless you searched for public sessions first

Game – general
• Xbox 360 achievement fix.
• Several optimisations and performance improvements.
• It is now possible to look left and right while in bonnet camera.
• Fix for a hang when selecting a gear outside the gears available on the vehicle (this was possible with H-Shifter)
• Fix for cars very occasionally flying into the air when hitting kerbs.
• Fixes for custom action maps
• Track rendering optimisations.
• Brown screen problem no longer awards achievements or causes glowing white cars.
• Fix for airborne achievement – now awarded even if car flips upside down during jump
• Fixed frame rate stalls and stuttering on Xbox 360.

PC Specific Changes
General
• Added support for Xinput wheel and Logitech Rumblepad 2, including default action map configurations.
• Adding ability to use H-pattern shifter in custom configuration by allowing configuration of gears 1 to 6 and reverse. Same for boost.
• Fix for missing Force feedback on Vista.
• Added the ability to override the controller type, so that if the game fails to auto-detect it, users can specify it themselves.
o Symptoms of the game failing to detect the appropriate controller type are:
On a pad, handling is too twitchy, appears to steer “lock-to-lock”.
On a wheel, the input lags and the linearity slider doesn’t appear to have an effect.
o To override controller type, find the hardware_settings_config.xml that is generated when the game is run (should be in My Documents\Codemasters\GRID\hardwaresettings) and change the line that reads <input device_type=”auto” /> to either <input device_type=”pad” /> or <input device_type=”wheel” /> as appropriate for your controller.
• Changing microcode optimisation level for NVIDIA 7xxx series graphics cards to reduce a pause when using each shader for the first time.
• Adding support for triple head displays.
• Graphical corruption fix when using multiple GPU’s.
• Network chat text made less obtrusive.
• Numerous on-going compatibility fixes.
• Improvements to shadows for certain resolutions/aspect ratios.
• Profiles are now flushed to disk when they are written to reduce the chance of them being corrupted if the PC dies.