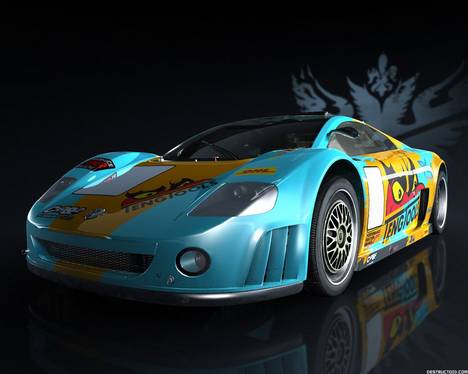 Codemasters sent us a bit of info today on an some upcoming downloadable content for their racer GRID for both Xbox 360 and PlayStation 3, and it seems like a pretty substantial update.

Called the “8 Ball” pack, the DLC will add eight new playable cars to the game, including the McLaren F1 GTR, the Mitsubishi Lancer Evolution X, and the Nissan GT-R GT500. I don’t know much about cars, but all of that stuff sounds really fancy, and the screen shots in the gallery seem to back up that assumption. All cars will be playable in the game’s “Race Day” mode and online races.

The pack also adds two new multiplayer events, along with four new achievements worth a total of 100 points. Obviously, this only applies to the Xbox 360 version of GRID.

No word on pricing or release date. The full press release — which achievement details and the full list of new cars — is after the jump.

UNIVERSAL CITY, Calif. – Sept. 19, 2008 – Codemasters today announced the upcoming release of the first downloadable content pack for Race Driver: GRID™, the summer’s hit game that made racing exciting again, with the reveal of the ‘8 Ball’ pack coming this fall for the Xbox 360® video game and entertainment system from Microsoft® and the PLAYSTATION®3 computer entertainment system.

Enhancing the award-winning Race Driver: GRID, the premium ‘8 Ball’ pack is set to feature eight thrilling new cars to race and two new online events to compete in. Each vehicle is beautifully realized and was carefully selected as a thoroughbred racing car with a unique personality to deliver a stunning race experience.

•    McLaren F1 GTR – The McLaren F1 GTR wrote itself into the history books as the only GT car to ever win Le Mans and is considered one of the finest examples of automotive engineering in history.
•    TVR Cerbera Speed 12 – The TVR 12 smashes past 60 MPH in just under 3 seconds. Production models were planned, but they were considered too powerful to sell to the general public.
•    Mitsubishi Lancer Evolution X – For over a decade the Evo has been billed as a supercar slayer – now the Evo-X in GRID lets you unleash its sledgehammer aggression in the Pro-Tuned class.
•    Honda S2000 – This roadster is heavily modified for drifting and has become a cult-favourite thanks to its award winning engine.
•    Nissan GT-R GT500 – The production model was Top Gear’s Supercar of the Year 2007. Now one of the world’s hottest cars makes its debut in Race Driver: GRID in its fully tuned racing spec.
•    VW Nardo – This powerful concept car made real from VW uses its 600BHP engine to rocket to 60MPH in 3.1 seconds.
•    Pontiac Firebird Trans AM – The 1971 racing edition of this true American legend is a worthy addition to GRID’s exclusive group of muscle cars.
•    Volvo C30 – Adding to Race Driver: GRID’s touring car roster comes the C30, Volvo’s agile, cutting edge hot-hatch straight from the STCC grid.

All eight cars will be available to drive in the game’s ‘Race Day’ mode and online races. In addition to the cars, the pack will make two new multiplayer events available, set on existing circuits from across Race Driver: GRID’s three continents and to test drivers to their very limit online. On Xbox 360, the pack will also feature four new Achievements worth a total of 100 points to earn from four new competitive challenges:

With pricing for the pack to be confirmed at launch, the ‘8 Ball’ content will be available from PLAYSTATION®Network for the PLAYSTATION®3 computer entertainment system and Xbox LIVE® Marketplace for the Xbox 360® video game and entertainment system from Microsoft®. Details for downloadable content for the Games for Windows® edition of Race Driver: GRID will be announced shortly.

Further content is expected to be released for the game, including a V8 Supercars featuring Ford and Holden cars and the Bathurst circuit, later this year. Each downloadable pack will require players to have a full copy of Race Driver: GRID on the appropriate format in order to experience the additional content. For all the latest information and videos, be sure to visit www.racedrivergrid.com