Goddess of the haunt

We have had our eyes on Erin Robinson’s Gravity Ghost for only a short while now, but every time we get to talk about it, we can’t help but spew nice things about the title. As a PAX 10 alumna with 2010’s Puzzle Bots, it’s not surprising that Robinson’s latest has captured our attention so well.

Gravity Ghost was on display at the recent Arizona Indie Game Showcase at the Phoenix Art Museum, and I spent a bit of time hopping between planets, collecting space flowers, and manipulating physics in an effort to achieve perfect orbit. 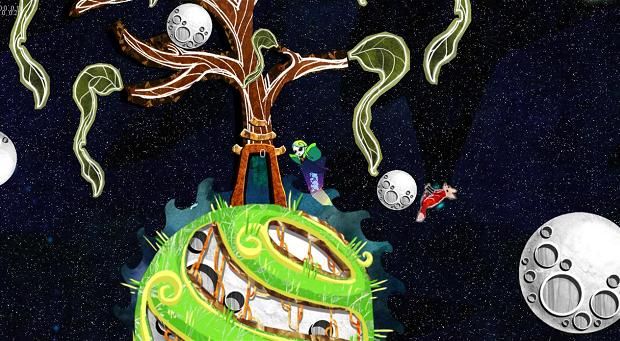 Gravity Ghost stars Iona, who spends less of her ghostly time haunting and more of it on collecting stars. These stars are found in interplanetary space, but the planets themselves are tiny with respect to Iona, so she can traverse their entire circumferences in seconds and even jump with enough force to reach escape velocity and move from one planet’s orbit to another’s.

It has been described as Super Mario Galaxy in 2D, and that description is apt in more ways than one. Not only is there the base element of moving between small planets, each with its own gravitational pull, but there is also the joyful use of color and the pure whimsy of launching oneself into orbit for no practical reason other than just to see how long you can go without touching land.

While on a planet or in the space between, Iona can control her movement with respect to the planet she is currently orbiting. The controls do take a bit of getting used to, especially in areas between two planets, and a lot of the time it seems that progress can be made more quickly through pure experimentation than through careful planning and execution, but that may be highly dependent on the player’s skill and understanding of the unique physics system in Gravity Ghost‘s galaxy. 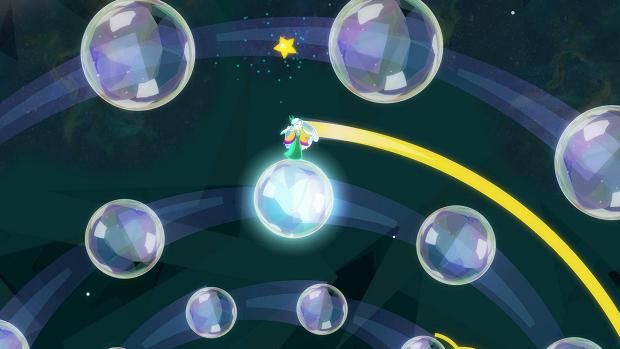 In addition to the normal planets found in Gravity Ghost, there is a handful of unique planet types with special physical features. One of the more interesting levels in the demo shows off hollow ice planets, which can be destroyed if Iona hits them with enough momentum. It’s a simple idea that capitalizes off of the pure fun of launching oneself away from a target planet, and then taking advantage of the gravitational pull a neighboring celestial body in order to slingshot into the ice planet with substantial velocity, shattering it and revealing the reward underneath.

Aesthetically, Gravity Ghost is a treat. Robinson’s visual style is sharp and colorful, and it really helps to present each level as its own little playground. Ben Prunty, of FTL fame, has provided a soundtrack that appropriately conveys the emptiness of outer space while still maintaining a melodic playfulness consistent with the art direction.

Understandably, the build shown skips all of the narrative in favor of demonstrating the gameplay, but it is a little disappointing to not have any sense of that aspect. Still, those interested in finding out more will not have to wait too much longer. Gravity Ghost is nearing completion and is set to release on PC, Mac, and Linux early next year.