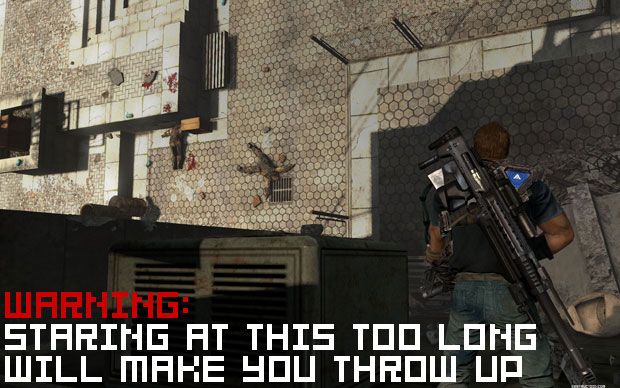 You know what the third-person shooter genre has too much of? Gravity.

Namco Bandai has announced that developer Saber Interactive’s third-person shooter Inversion will hit Xbox 360 and PlayStation 3 in 2010. The title puts players in destructible, gravity-shifting environments, giving them control over futuristic weapons like the Grappler. With said weapon, players can move objects for cover, assult on enemies, or to solve puzzles.

“We are doing things in Inversion that most people didn’t think possible on the current generation of consoles,” said Matthew Karch, CEO of Saber Interactive.

We’re not sure what that means yet, as we’ve yet to see Inversion in action, and we’re too busy trying to suss out the game’s plot. More on that after the jump.

Straight from the PR mouth of Namco Bandai, we present — the plot of Inversion:

Set in the near future, the tranquil peace enjoyed by mankind shatters with an unforeseen invasion by an unknown enemy called the Lutadore. Armed to the teeth with futuristic gravity-controlling weapons, the Lutadore easily overrun the city’s defenses. Unbeknownst to all, mysterious anomalies have surfaced in conjunction with the invasion. Random regions in the city have entered zero gravity or have suffered vector changes, throwing the world into topsy-turvy chaos. Assuming the role of Davis Russel, a hotheaded 28-year-old cop, or Leo Delgado, Davis’ neighbor, players will embark on a journey through the disorienting war-ravaged, gravity twisted streets of their home town and beyond, to find Davis’ missing child.