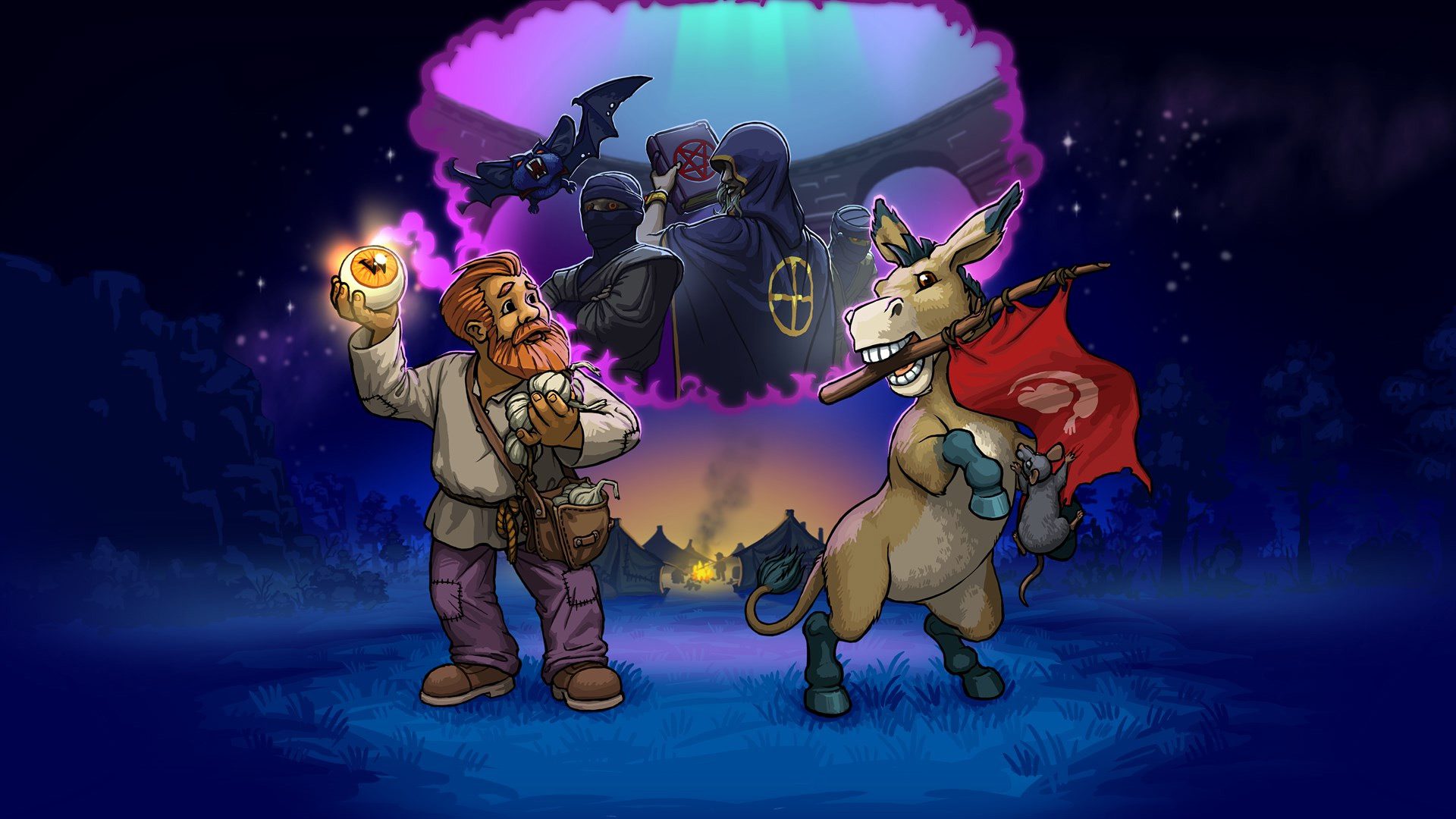 I’ve spent an unreasonable amount of time unwinding with this game, and I don’t regret it

I did it. It’s finally done. I’ve passed the “everything that counts” progression threshold in Graveyard Keeper, and I even caught 200 fish for a silly trophy. Now I can confidently, satisfyingly delete the game from my PS4 and never look back — unless they rope me in with another story-based expansion, which I could absolutely be convinced to play.

Graveyard Keeper turned three years old this month, and coincidentally, I’ve been playing an unholy amount of it lately. This is a crafting game through and through, one that’s full of boring-yet-relaxing busywork every conceivable step of the way. You, uh… you in? 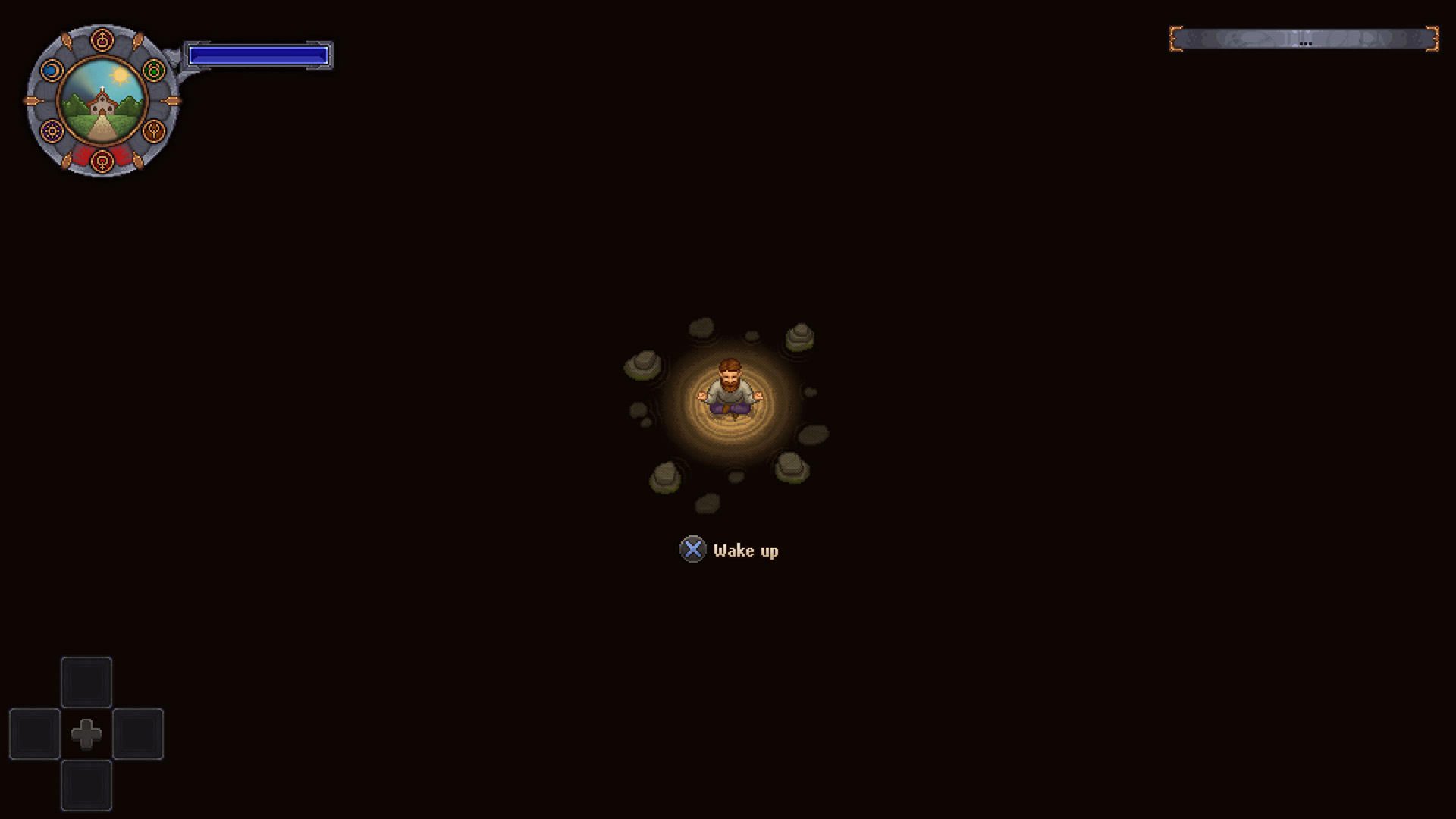 It is a no-joke *grind*. If you’re okay with that — if you can stick with a multi-month game that’s meant to be chipped away at, not brute-forced — there’s a lot to like about it.

There’s also a lot to dislike, depending on your tastes, your willingness to always play with a wiki by your side, and your tolerance for, let’s be real, blatant padding.

Graveyard Keeper has and will continue to be likened to Stardew Valley, but it’s such a different experience, even if there is clear conceptual and mechanical overlap. This is more of an RPG in terms of convoluted technology trees and XP to painstakingly earn. 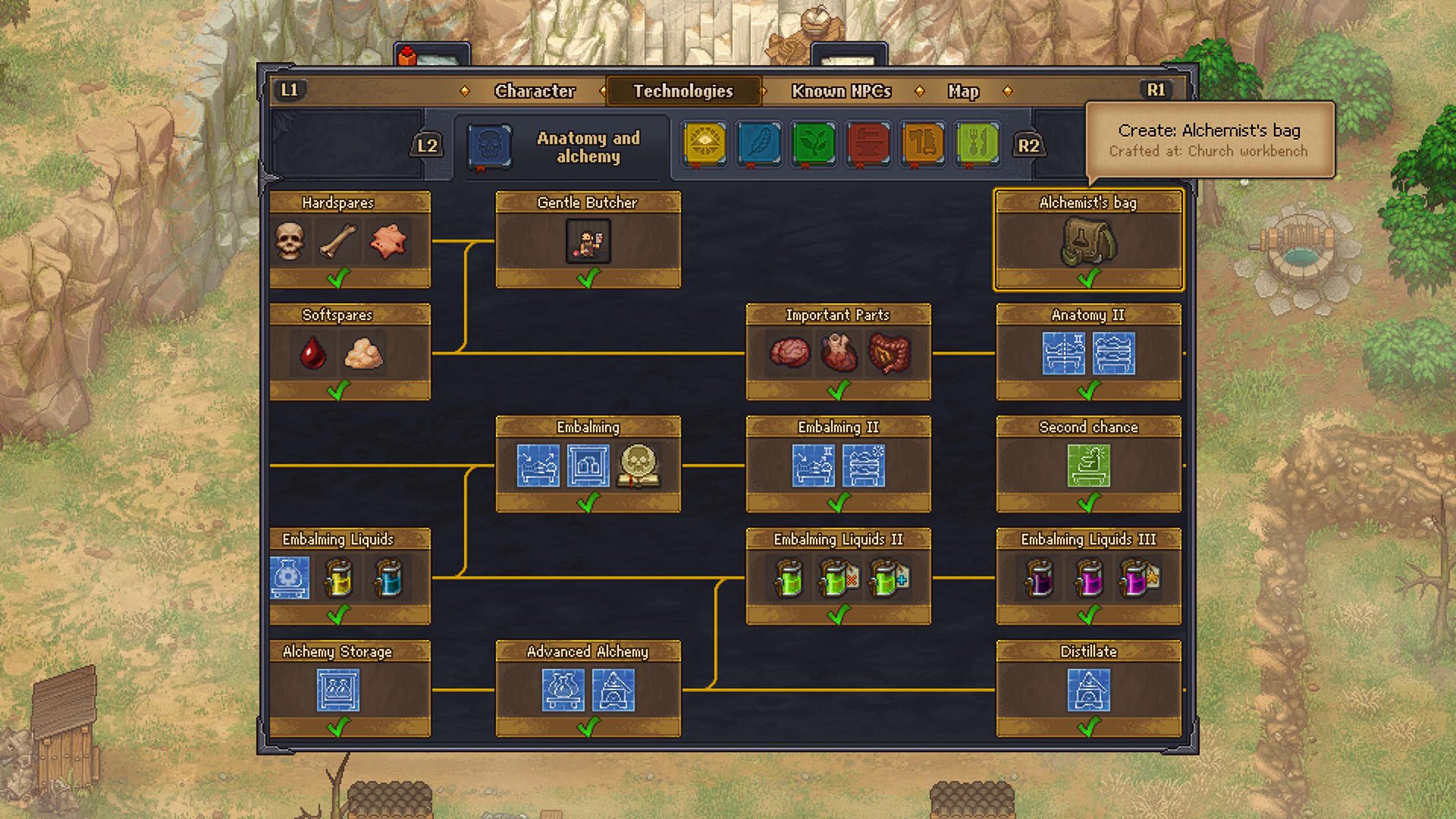 Sure, there’s a farm, and fishing, and a bit of sword-swinging combat in a cordoned-off dungeon, but you aren’t out to whoo any of the locals with their favorite gifts each week, and the story is more expansive, and far more out-there. Also, you carve up corpses, supply a snack stand for witch-burning audiences, and run a sketchy for-profit church.

There is a surprisingly twisted (and quirky!) story to slooowly uncover that truly goes places you wouldn’t expect, doubly so with the lore-expanding Stranger Sins and Game of Crone DLC that fill in some gaps that maybe shouldn’t have been there in the first place. 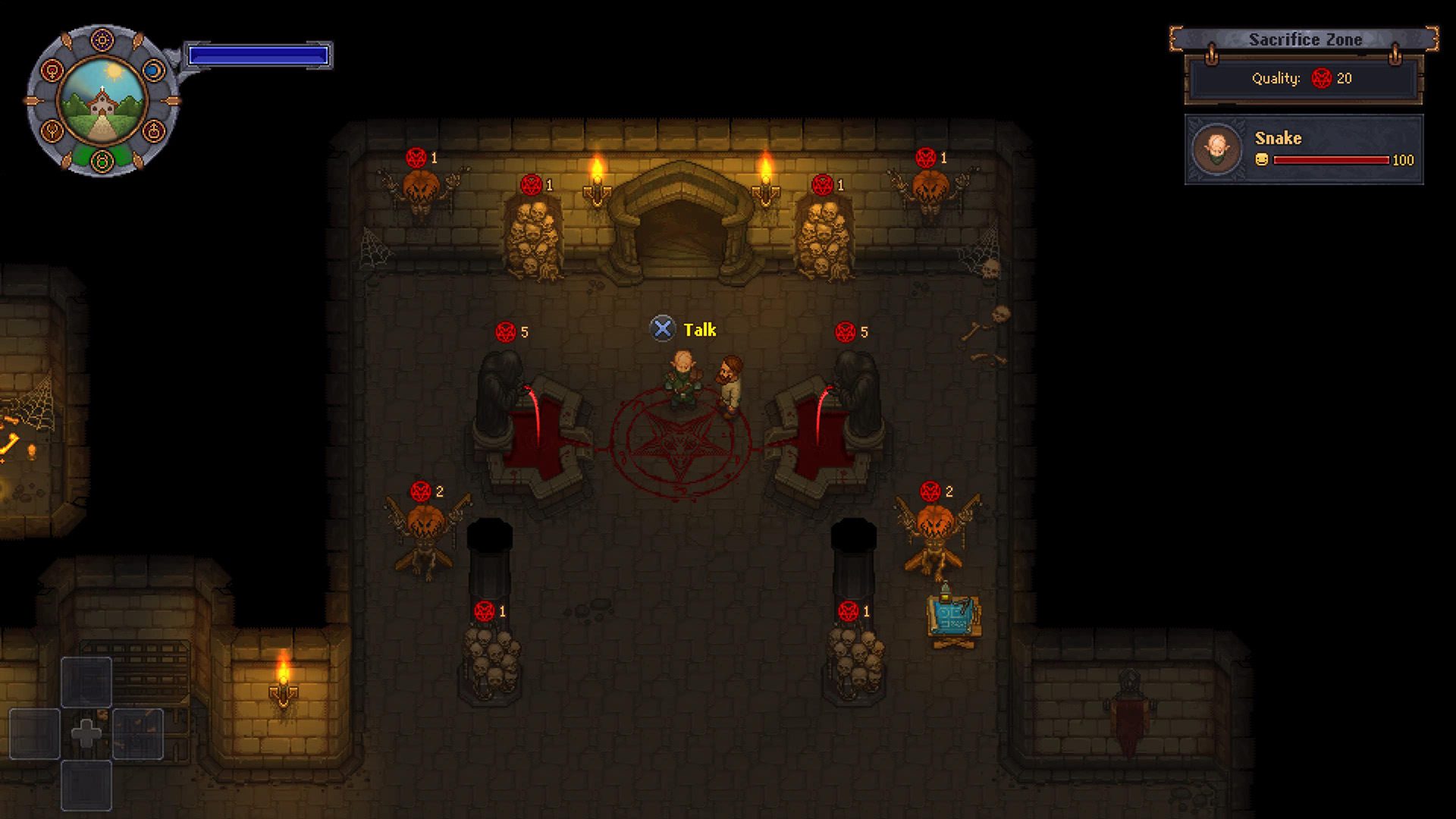 The main story path revolves around six characters, all of which have their own day of the week. Instead of following an intuitive seasonal calendar, you — a present-day dude who’s stranded in a mystical medieval-village fever dream — will rely on a six-day cycle.

Your in-game clock is based on the seven deadly sins, and it uses astrological symbols, with each one corresponding to a special roaming NPC who will appear on that day and that day only. For new players, the weekly schedule is the first of many, many encounters with the aforementioned wiki, as much of Graveyard Keeper is left up to you to figure out.

You’re also going to wonder what’s up with the “blue points” and how to reliably earn more of them to flesh out your tech trees, among a hundred other granular searches. 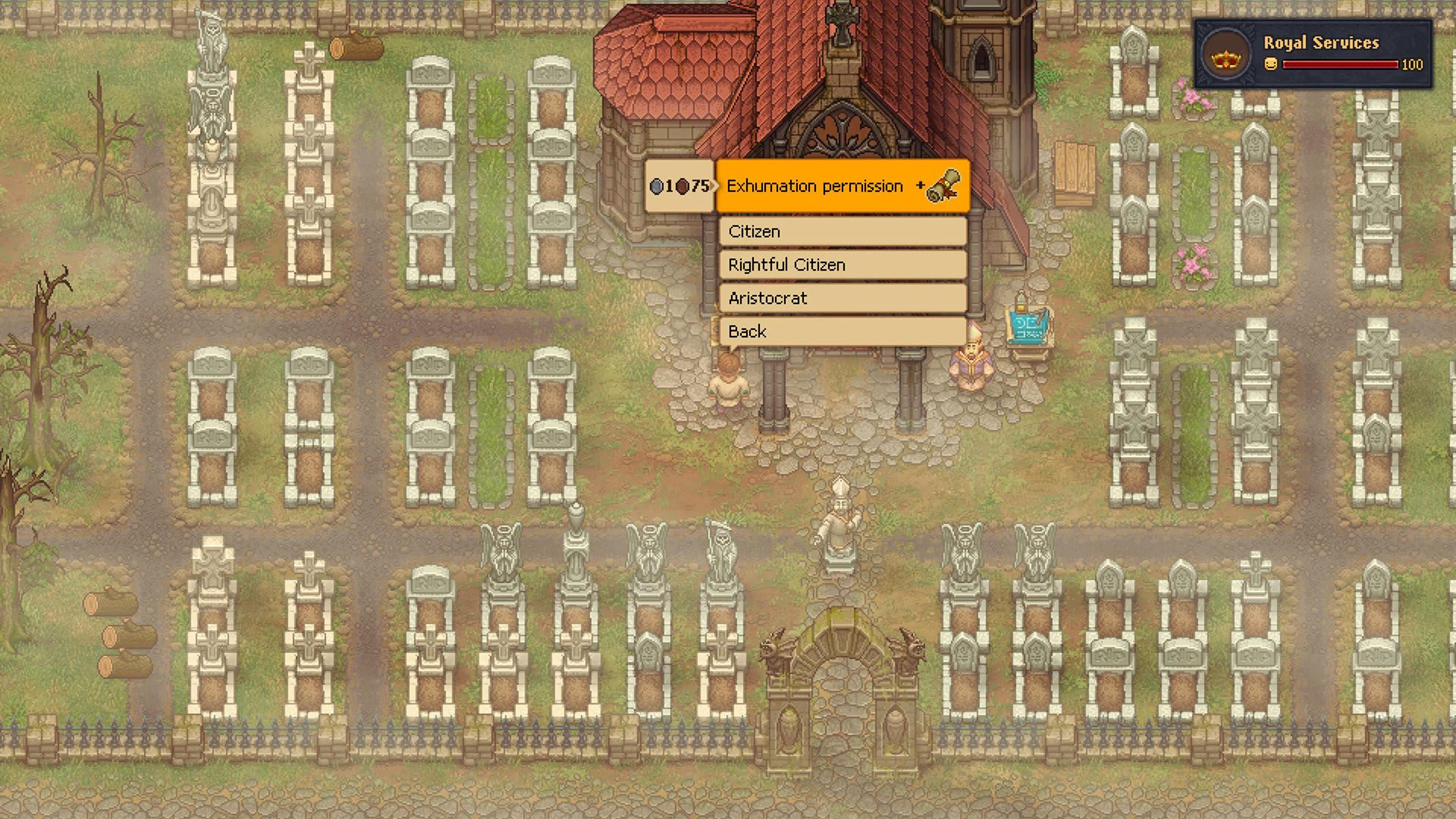 The lack of clear in-game answers for basic gameplay elements, mixed with the morbid subject matter and dark humor in the dialogue, leads to this semi-offputting yet strangely compelling vibe. Again, all is not what it seems in this world with a talking skull and donkey, regular witch burnings, and burgers made of sliced-off cadaver flesh.

There are payoffs, and answers. The laughably tangled-up spiderweb of NPC quests that almost all need to be completed near-simultaneously will get resolved. Eventually.

Before I got accustomed to Graveyard Keeper‘s ways after clocking in day after day to prep resources to craft this, which leads to that, which lets me do the other thing, only to forget what I was doing in the first place, I found the purgatory-esque village mildly unsettling. I got the nagging sense that, aside from all the obviously bleak shit around me that the protagonist can’t help but go along with, something was… off. Not in a bad way, though.

Do you generally feel “comfortable” inhabiting the doomed world of Majora’s Mask? I sure don’t! But once you’re sufficiently acclimated, both games can be cozy in their own right. 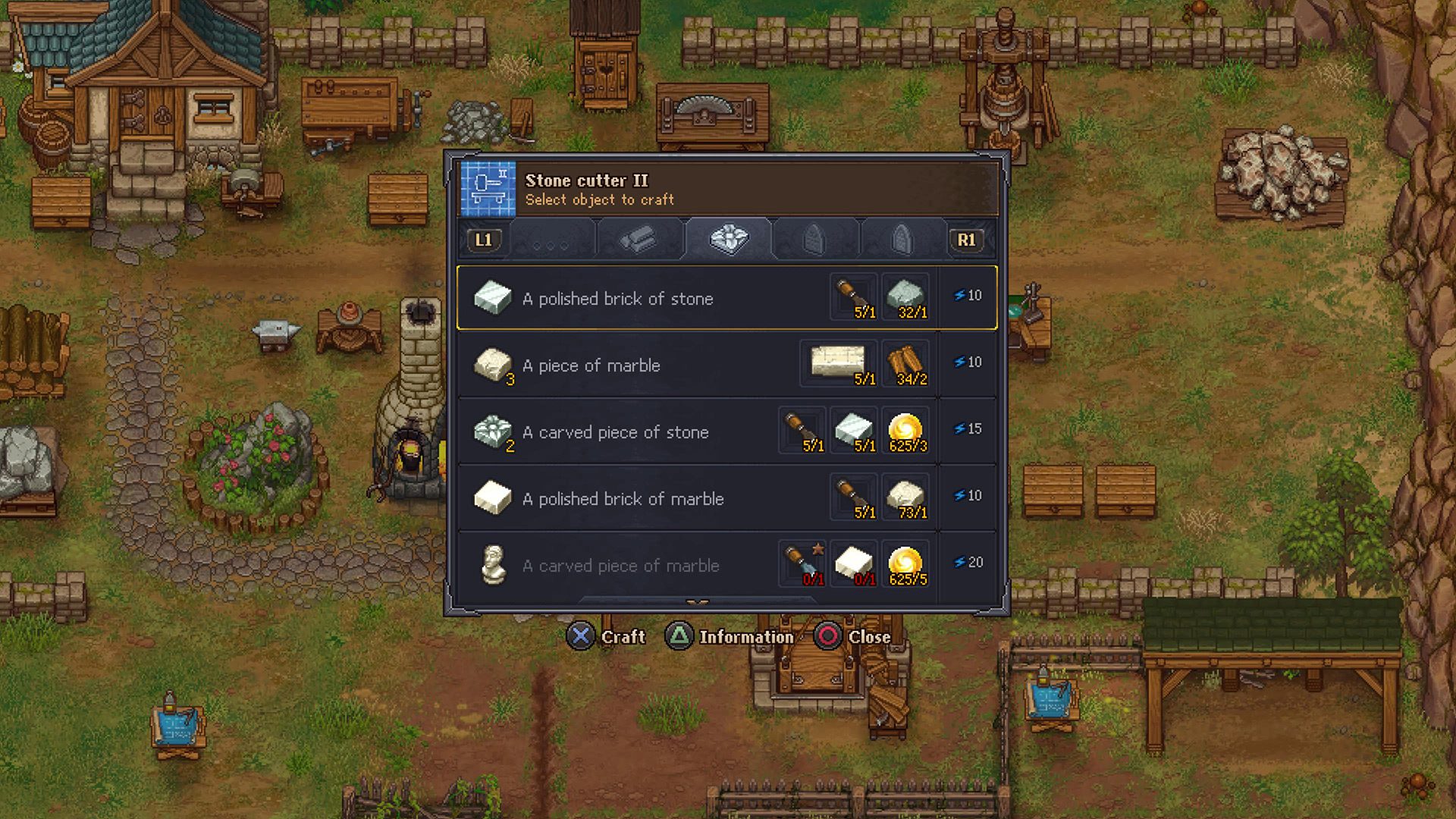 It’s a long journey though, so strap in. Graveyard Keeper is entirely willing to toss you an interesting story beat or character moment here and there, only to let you toil away for potentially hours before you can see the next step. All the while, intentional or not, you’ll contemplate — you’ll dwell on a lot of things, in and outside of the game, actually.

If you make it to the end, well, first, you’ll probably be annoyed by the anticlimactic finale, to say nothing of the fakeout with the carrot-on-a-stick Town — but ultimately, the experience will stick with you. The highs outweigh the lows, at least they did for me.

If you’re on the fence, or you’ve dipped your toes in the game but fell short of finishing it, I would give the DLC packs a real look. They might as well be mandatory. I say that having originally played Graveyard Keeper on Nintendo Switch, where I beat it and moved on with mixed feelings, and again on PS4, this time with the all-inclusive Ultimate Edition. 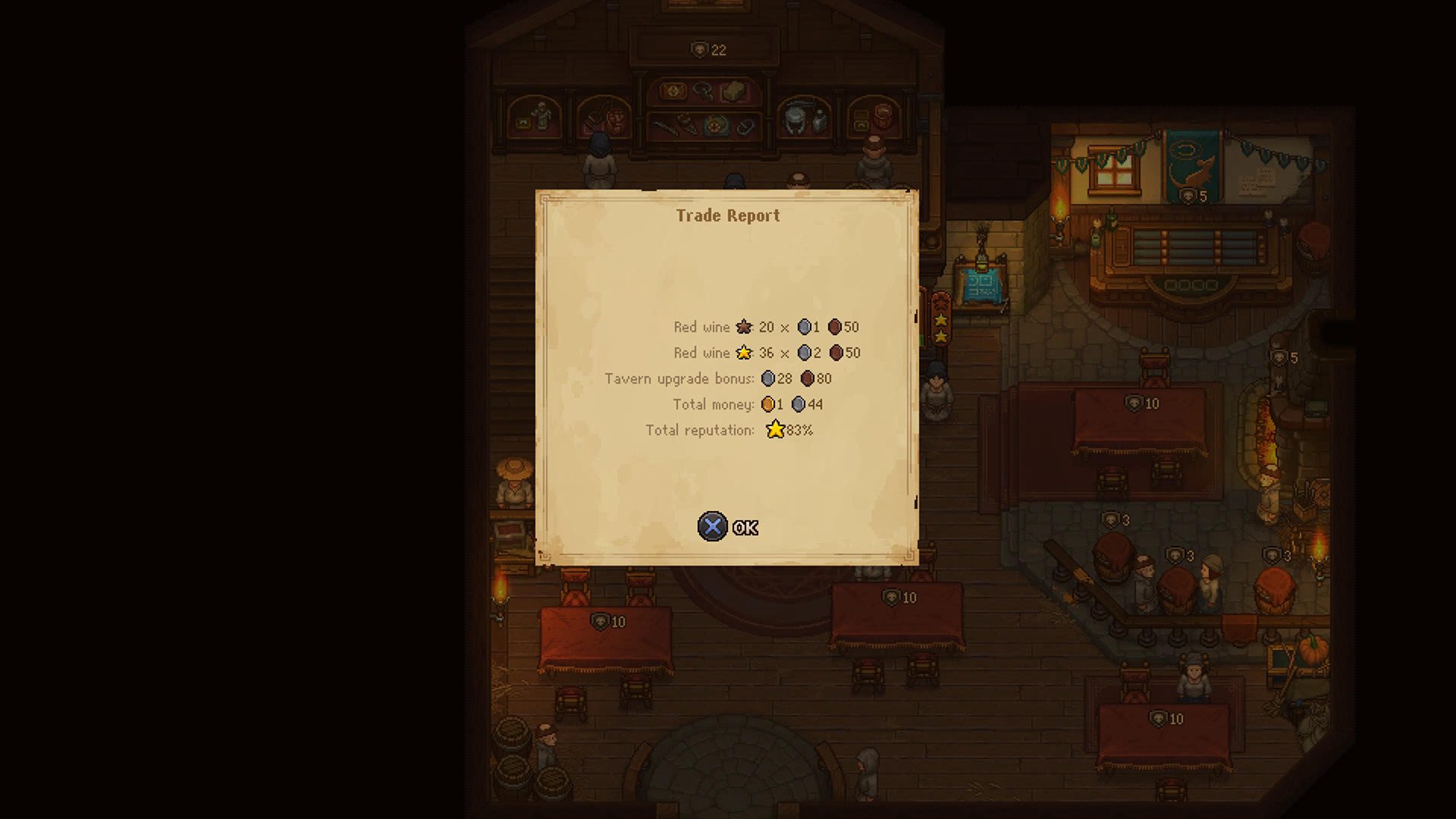 Breaking Dead will let you put those extra corpses to work, literally. You can create and assign automated zombies to gather energy-zapping resources like marble and wood, or plug away at the crops on your vineyard and farm while you’re busy elsewhere, or — best of all — ferry resources from the far-off northern quarry back to your homestead. I got so sick of dealing with that dreadful hike in the mid-to-endgame grind on Switch, so I cherished my set-and-forget zombie setup once I figured out all the logistical planning.

Stranger Sins is a major questline about building and running a tavern, which slots nicely into the rest of the game once you’ve got a good supply chain going for beer and wine. More than that, though, this DLC adds an interesting (and much-needed) extra texture to the eccentric but kinda incomplete story and underutilized characters of Graveyard Keeper, with lots and lots of unlockable “prequel” cutscenes. It is another resource-juggling fetch-quest *grind*, as all things are, but it gave me a new outlook on the big picture.

Game of Crone has rubbed some players the wrong way with unlockable perks tied to certain endings, and potentially buggy elements (though I didn’t have any issues). Overall, I liked it once I got into it. After getting tangled up in a vampire-hunt mystery, you’ll be able to build a full-on refugee camp, which ends up being a pretty great dopamine release. This storyline isn’t as compelling, but I appreciate the settlement as another thing to keep tabs on every so often in between my usual chores. By the time you’re ready for it resources-wise, the camp will help break up some of the main-quest monotony.

Pardon the references. The names are tacky. 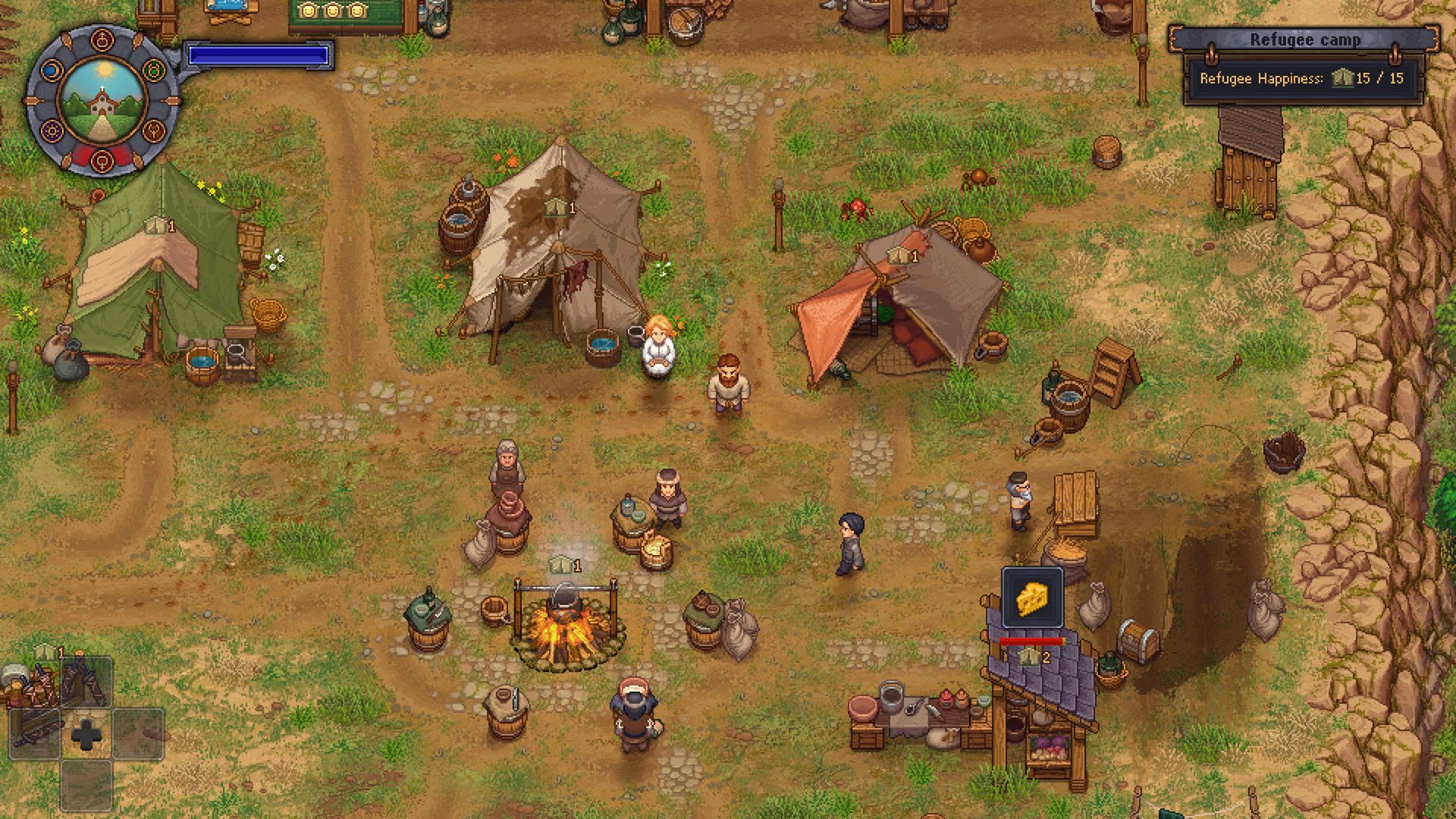 These expansions don’t fix or address everything in the original game (fishing is still underwhelming), and it’s a little awkward to know when to engage with them — not too early, but not too late, I guess. You have to be willing to start the tavern and refugee camp knowing full well that you’ll need to walk away at a certain point and circle back (unless you’ve got an endgame save ready to go, which will also lead to some less-than-ideal pacing). All told, though, the expansions are worth it. They help more than they hurt.

I wouldn’t recommend Graveyard Keeper to everyone, not a chance. But for those of us who can put up with the minor annoyances, the sometimes wacky and arbitrary padding, and other causes for confusion and unnecessary friction, it’s honestly one-of-a-kind.

As long of a grind as it was to just finish Graveyard Keeper‘s critical path, to say nothing of the probably two dozen extra hours I spent mopping up the side content and other miscellaneous fluff, I really would be down for another DLC — or a sequel one day.