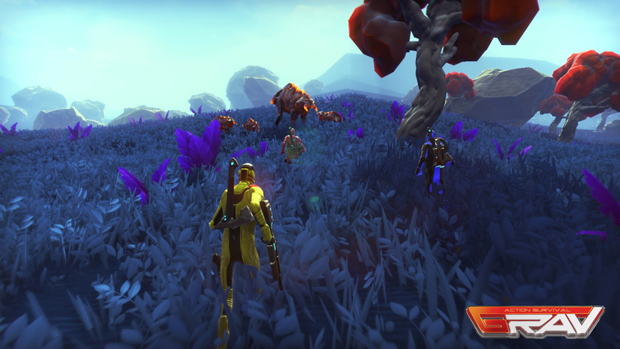 I don’t know when I’ll be in a state of mind to play another “sandbox survival experience,” but I do like the look of GRAV and its vibrant alien worlds. The dancing is a nice touch, too.

This is a PC game in development at BitMonster, a studio founded a couple years back by former Epic Games developers (and also a pair of adorable dogs). It ticks off the usual boxes: resource gathering, crafting, modular base building, procedural generation, ranged/melee combat, player versus player but, again, the setting appears to be the defining characteristic.

BitMonster is hoping to push GRAV through Steam Greenlight and release it on Early Access, which I’m sure it’ll be able to do in no time — the game seems like something Steam users at large would be into. They can play it and provide feedback while I wait for the finished version.