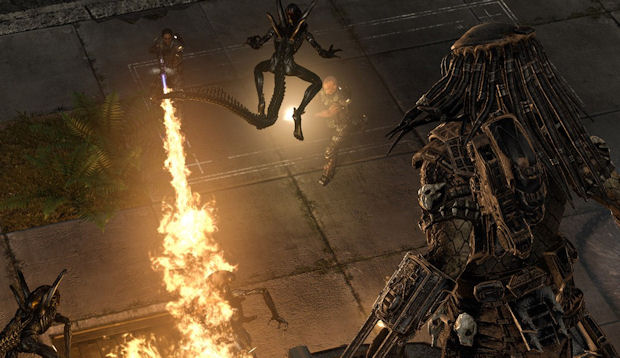 After playing the much-discussed Aliens vs. Predator demo, the first thing I did was laugh at just how hilariously violent it was. Within a minute of playing as a Marine, I had a Xenomorph’s tail spear me in the back and come out of my chest. As an Alien, I’ve stabbed people in the eyes with my fingers, speared them in the head with my tongue, and chopped other Aliens’ face off.

And according to Rebellion, this pornographic cavalcade of sci-fi violence is completely necessary!

“In spite of drawing on some great source material like the comics, the 1999 game as well as the original films, the AvP movies went for the biggest audience they could find with a lower age rating and that, I think, is what pissed people off the most,” explains senior producer Dave Brickley. “It’s not something we ever even considered for the game, as you can probably tell by some of the kill moves. It’s impossible to pay homage to the material without being so graphic.”

Some people have criticized the “conga line” of executions found in the demo, but I loved it. It’s just hilarious to see a row of people taking turns to stab each other in the face, and I’m glad the Rebellion chose to make this game as vicious and brutal as possible. The game’s out next week and I have a feeling it’s going to be very polarizing. Can’t wait to see how all the reviews turn out.