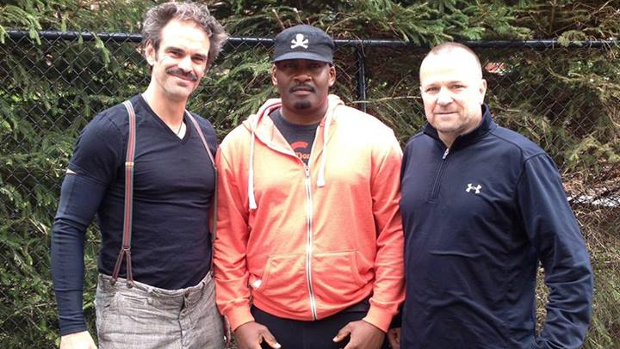 Geoff Keighley tweeted a link to this picture of the Grand Theft Auto V voice actors Steven Ogg (Trevor), Shawn Fonteno (Franklin), and Ned Luke (Michael) together in real life. Ogg looks so much like Trevor! Or, I suppose, Trevor looks so much like Ogg. Also a bit like we can expect Destructoid’s Conrad Zimmerman to look in ten years, minus the height.

Seeing the faces of familiar voices is always weird, whether you’re finding out what your favorite singer looks like or you’re peeping the fleshy meatbag behind the voice of a character in a videogame. Now more than ever it feels particularly weird because of how often voice actors’ visage is used in the character model. It’s uncanny.

Are you enjoying Grand Theft Auto V as much as Jim did in his review? I haven’t played it yet, but I did make a GTAV-inspired pastrami-topped triple chili cheese dog burrito, and that’s something. Heart failure, mostly.