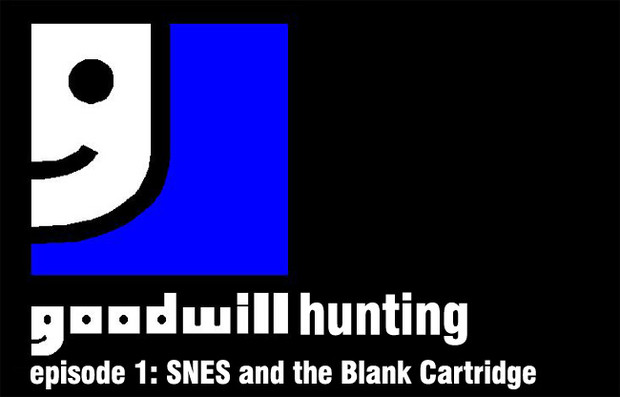 [Editor’s note: I’m promoting this one as a friendly PSA to remind you all that Goodwill and thrift stores do hold good finds every so often. — CTZ]

[Goodwill Hunting is a possibly weekly series about my gaming adventures at local Goodwill Stores and thrift stores. Sometimes it will be interesting and sometimes it won’t be. Just like Goodwill. I may occasionally hold contests for games I find and already own or don’t feel like keeping, so keep your eyes open for that because everyone likes free stuff, right?! This first episode occurs over a period of about two weeks.]

It all started around Noon on a Friday. The location, a little home owned restaurant with my mother, brother, and fiancee. I had ordered the American burger special, all beef patty, cheddar cheese, onion, mayo, mustard, hold the ketchup. Soup or salad? Soup, clam chowder.

The soup comes. It’s delicious. I’m not usually a clam chowder fan but this is an exception. Everyone else with me is eating salad or nothing at all because their meal didn’t come with anything. Sucks to be them, right?!

Soon, the main entrees are delivered and the table is mostly quiet while our mouths are filled with food. My fiancee asks for a to go box as we get ready to leave as she still has about half of here tomato tortellini left.

We leave. She forgets her box. She becomes sad.

I instantly go to the area where the videogames are usually displayed although it is not the only place. I have occasionally found games in the board games section, the toys section, and the VHS section as well.

In the display case sits a Super Nintendo cartridge. It’s body stripped bare to a dull gray plastic. There is no label and the cartridge has lost it’s identity.

I contemplate for a minute. I don’t own a Super Nintendo, but that doesn’t mean I won’t eventually. I was born a Sega child but that doesn’t make Nintendo things bad. Just different. Plus, this game could be Earthbound! I can get Earthbound for $3.38! How did Goodwill think of $3.38 for videogames, anyway? Couldn’t it just be $3.50?

So, I decided to buy the naked cartridge that it’s owner’s had so obviously abused. It’s like adopting a little puppy from the pound that’s never had a good home, except what I’m doing is even more noble. I could be buying a fucking sports game for all I know.

And that’s how that day ends. Soon I went to work and the day went on as usual. But in the back of my mind at all times was the cartridge. Its gray plastic glow staring at me with its label-less eyes.

What game is under there? What secrets do you hold?

About two weeks pass and I’m on one of my regular Goodwill visits. I work part-time at a local university teaching 3-D animation and just down the road is a Goodwill I often visit after work. I still did not know what this blank cartridge held and so was constantly on the lookout for a Super Nintendo system. I instantly went to the usual videogame section and there it was sitting on the glass counter. Wrapped up in large amounts of packing tape: Two Super Star Wars games, two Controllers (one Nintendo, one Interact), an AC adapter, a RF Switch, and the Super Nintendo console. Stamped on top $25.38. I’m buying it. I have seen Super Nintendos here before but never complete like this. Usually, there’s just a lone console, no cords or controllers. This was a rare find. I bought it instantly.

After taking it home it took me a few days to finally hook it up and find out what this blank cartridge was. I didn’t really want to ruin the mystery. For me it could be some rare valuable RPG but in truth it had a better chance of being something crappy. Why ruin my disbelief? Why tell the kid that Santa isn’t real?

But I eventually did find out.

My fiancee was over and she wanted to play Super Mario World, which, I had recently purchased. I started cutting off the mass amounts of packing tape that had been applied to the Super Nintendo system. I plugged the AC adapter in. Hooked the RF switch up to the TV. Blew in the blank cartridge and pressed it firmly into the cartridge slot and turned the power on.

The Capcom logo appears. This is a good sign.

Not a bad find, I say. I’ve heard about the series before and never have actually played them myself. It may not be Earthbound but it’s definitely not NFL Quarterback Club either. A quick Amazon.com search shows the game’s value to be around $20. I’m happy with my purchase. I saved $17. Now, someday I might get around to playing it although I might look into getting Breath of Fire I to play first. Only time will tell.

Until the next Goodwill Hunting!