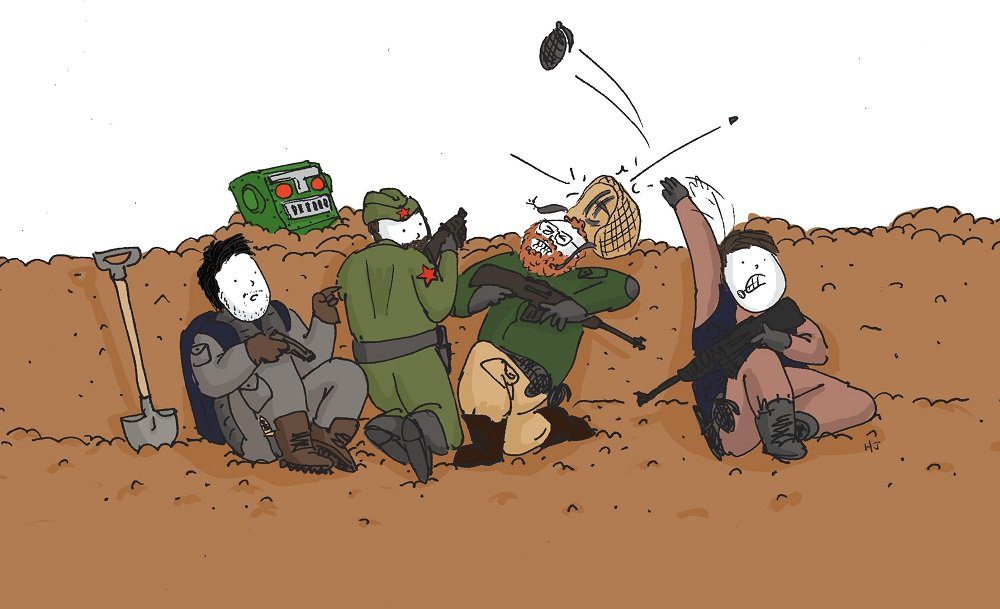 The legacy of *that* amiibo article will never die

[As you may or may not have read, Brett Makedonski has taken his leave of Destructoid for pastures new. Brett’s hard work, candid nature, and wry eye for headlines helped pumped the life blood of our humble home every day for seven years. We’ll miss him dearly and daily. Thanks for everything, doode. We love you. – Moyse]

At GDC 2017, we reached the apex of acting like dumbasses at the GDC Awards. Plunked down at a VIP table with other media, we smuggled in daiquiri ingredients and a case of Bud Light. This is a nice event. People dress up. There’s wine on every table. We arrived early, made a pitcher of daiquiris and offered drinks to nearby hopeful indie developers.

Maybe 15 minutes before the awards started, Kotaku’s Jason Schreier sat down at his assigned spot at our table. He looked around and absently asked “Where’s our water pitcher?” A beat passed. A second beat passed. Then, with completely perfect and probably-unintended comedic timing, he looked at our jug of daiquiris and said “…That’s our water pitcher, isn’t it?” Former PCWorld writer Hayden Dingman put the smuggest smile on his face and just went “Yep. Want some?” Steven giggled like he was faded even though I know he wasn’t. Dave Thier of Forbes looked up for a split second and then went back to counting his briefcase full of money.

These are the things I’ll take with me. Destructoid has given me the opportunity to travel more than most people will travel in a lifetime. It’s given me access to talk to some of the most creative and highly-regarded minds in the industry. It’s given me a trillion dollars’ worth of free video games. I appreciate all of that, but I’ll most cherish memories like Niero waking me up at 2am to drink wine with him, or me and Steven intentionally missing the last train so that we’d have an excuse to walk across the entirety of Tokyo in the early morning, or dancing until 6am to ’80s hits in a Reykjavik bar named after The Big Lebowski.

After seven years of writing full-time for Destructoid, I’m leaving. For 95% of people, games writing is like a jack-in-the-box. You crank, and the music plays, and you keep cranking, and the music keeps playing. Everyone knows that music’s going to eventually stop and the fun is going to end. It’s not a matter of if; it’s always a matter of when. That clown springs to life for nearly everyone, it’s just a little later for some people.

This year has been tough on me, and I know that’s not a novel feeling even though it’s a completely valid one. I didn’t get to travel. I didn’t get to talk to any creators. I didn’t get to see any of my many friends that I’ve made in this industry. Those are the perks of this job for me. Instead, I clocked in every day, blogged some news, and clocked out. Days melted together. I felt like I didn’t have anything to say, and that’s how you know you’re done and dusted as a writer. I don’t really expect events in 2021 and I know I can’t take another year of being de-energized. It’s time for a change.

I’ll spare you the vague statements about what’s next. I’m leaving games. I’m going to work for a poppin’ startup called Loupe. It’s a streaming and sales platform for sports cards and other collectibles. I’ve been doing some freelance writing for them for most of 2020, and I realized it’s something I want to explore further. The sports card hobby is extremely hot, and there’s an exciting opportunity to grow a business from scratch. Most important, it’s what’s energizing me right now.

I have a bajillion thank-yous and well wishes to send out.

It all starts with Niero, as it should. Niero: Thank you for taking a chance on me, but, more importantly, thank you for sticking by this site and this community. It would’ve been so easy to give up so many different times. You’ve done so much for so many people, and it hasn’t gone unnoticed. You’re a fantastic drinking buddy, and about half of those memories I mention up top prominently feature the shenanigans you dragged me into.

Dale: I’ve told you this a lot over the years but I’ll say it one last time: I sincerely appreciate you taking me under your wing and mentoring me — whether you meant to or not. You taught me a lot about what it means to be a professional and how to conduct myself. I don’t think I would’ve gotten this far without the lessons you shared with me. Also, you’re one hell of a travel buddy.

Jordan: I would’ve written this farewell many years ago if it weren’t for you. This site would’ve crumbled so many times without your dedication to keeping it afloat. You’ve been my rock this entire time, through good and bad. You’re the best coworker I’ve ever had, you’re a better friend, and I think the world of you.

Chris: You have to be the hardest working blogger in the games industry and I admire the hell out of that. Your leadership and decision-making over these last five years has helped the site run more efficiently than it ever has before. People see your output on the front page, but they don’t see everything you do behind the scenes. They’d be even more impressed than they already are.

CJ: I fell in love with your satire, except for when you almost got us sued into oblivion. I think you’re an incredibly talented editor who has elevated the quality of our features, except for when you want rewrites from me. Another memory I’m taking along is your surprisingly excellent and spirited rendition of Bjork at karaoke.

Community Team: Thanks so much to all of you for always having our backs. I know I haven’t expressed my gratitude enough, but you all make our jobs so much easier. You all do a great job keeping everything buzzing along and that’s something that definitely goes overlooked. When people call me an idiot, you tell them that they’re, in fact, the idiot. I appreciate that even though it probably was me who was the biggest idiot all along.

Steven: Comrad, I truly miss exploring the world with you. What a stupid job we lucked into. Kyle: We did so much together, but thanks most for getting Podtoid up and running again. It was a great way to spend an evening once a week. Darren: I’m sorry Kyle got Podtoid up and running again. Zack: Thanks for not letting me die. Ray: Now that the Zodiac Killer’s cipher has been solved, do just ascend into Heaven or how does that work?

Yes, there are so many of you whom I missed. Old bosses, longtime peers, community members I particularly adore, people I’ve regrettably lost touch with — if you interacted with me at Destructoid, thanks for contributing something to my life. You’ve made this last seven years better in some capacity. Unless you sucked. Go kick rocks if you sucked.

This is already 1,200 words, and I’ve shed about that many tears while writing it. Let me leave you with this, though: Do me a favor and tell a writer you like that you appreciate their work. It takes ten nice remarks to offset one shitty remark, and we see a lot more of the latter. It takes a very tough person to truly block that all out. I don’t think any of us would be writers if we didn’t seek validation anyway.

Y’all go rest y’all souls, ‘cause I know I’ma meet you up at the crossroads. Y’all know I forever got love for my Dtoid fam, baby.