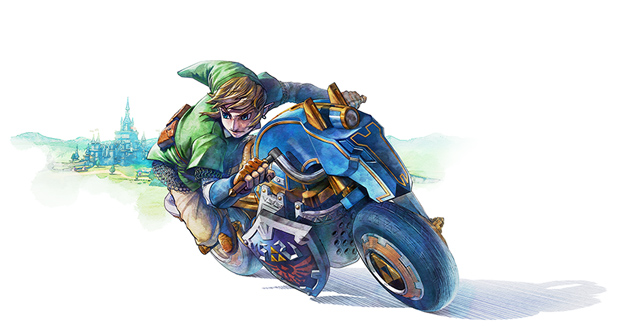 We’ve seen a couple images of Link in Mario Kart 8 before but nothing like this. Take special note of the front of the motorcycle. So cool! Hope the vehicle’s stats are good.

As a reminder, the DLC is coming in two waves. Link, Tanooki Mario, and Cat Peach are arriving in Pack 1 this November, while Villager, Isabelle, and Dry Bowser won’t be out until May 2015. Each pack ($7.99 a piece or $11.99 together) also includes four vehicles and eight tracks.

I ended up paying for the DLC early to get immediate access to the different-colored Yoshis and Shy Guys. Haven’t made very much use of them yet, but Link will be another story.

There’s also some new artwork for Villager and Isabelle from Animal Crossing:

But who cares about that, because Link has a fucking motorcycle.