A roguelike platformer where you’re trying to find trinkets to cheer up your only friend — that just happens to be a giant, land-bound whale named Sally — was my favorite game at PAX East this year. Are you surprised? How can something with such a cute premise not win over my heart?

Playing as Ikk, you’ll be running through procedurally-generated levels that are seemingly drawn on the screen as you move, meaning the level in all directions will be invisible until you get closer to it. Think of the ‘fog of war’ effect found in most RTS games, only it is pitch black aside from enemies. This works well with the odd, minimalist art style that feels like a mix of a The Behemoth and Tim Burton, only with fewer colors on screen at once. Beautiful and wholly original to say the least.

At the start of each life, Ikk can decide between different heads and guns to equip. Heads grant different abilities, such as having a third air jump, more health, and so on, while the guns I got to play ranged from a basic Metroid-like pea-shooter to shotguns and lasers. Guns and heads can be found and unlocked permanently for subsequent playthroughs.

Guns have unlimited ammo, but varying clip sizes between them. Reloading can be performed nearly instantaneously by mashing the reload button twice in a row, but I’m not sure what this adds to the game other than a very brief pause before shooting again. I didn’t mind it, though.

Double jumping causes a platform to be drawn underneath you for a moment, which means double jumping almost make sense for the first time ever in a game. Almost. You can also wall jump, slide down walls, and jump on enemies heads to damage them, pending they aren’t attacking at the time. The controls are silky smooth, which is a must considering the large amount of enemies that can be on screen at any given moment.

After getting killed by the first boss a few times, I found myself cruising through the first level by avoiding enemies and rushing to the end. As the developer watched this happen, they noted they intend to implement a way to do a pacifist run, as it is always interesting to see pulled. I love when developers consider the speedrunning and streaming communities, because it shows that they are savvy to the current state of online gaming and dedicated to giving players what they want. 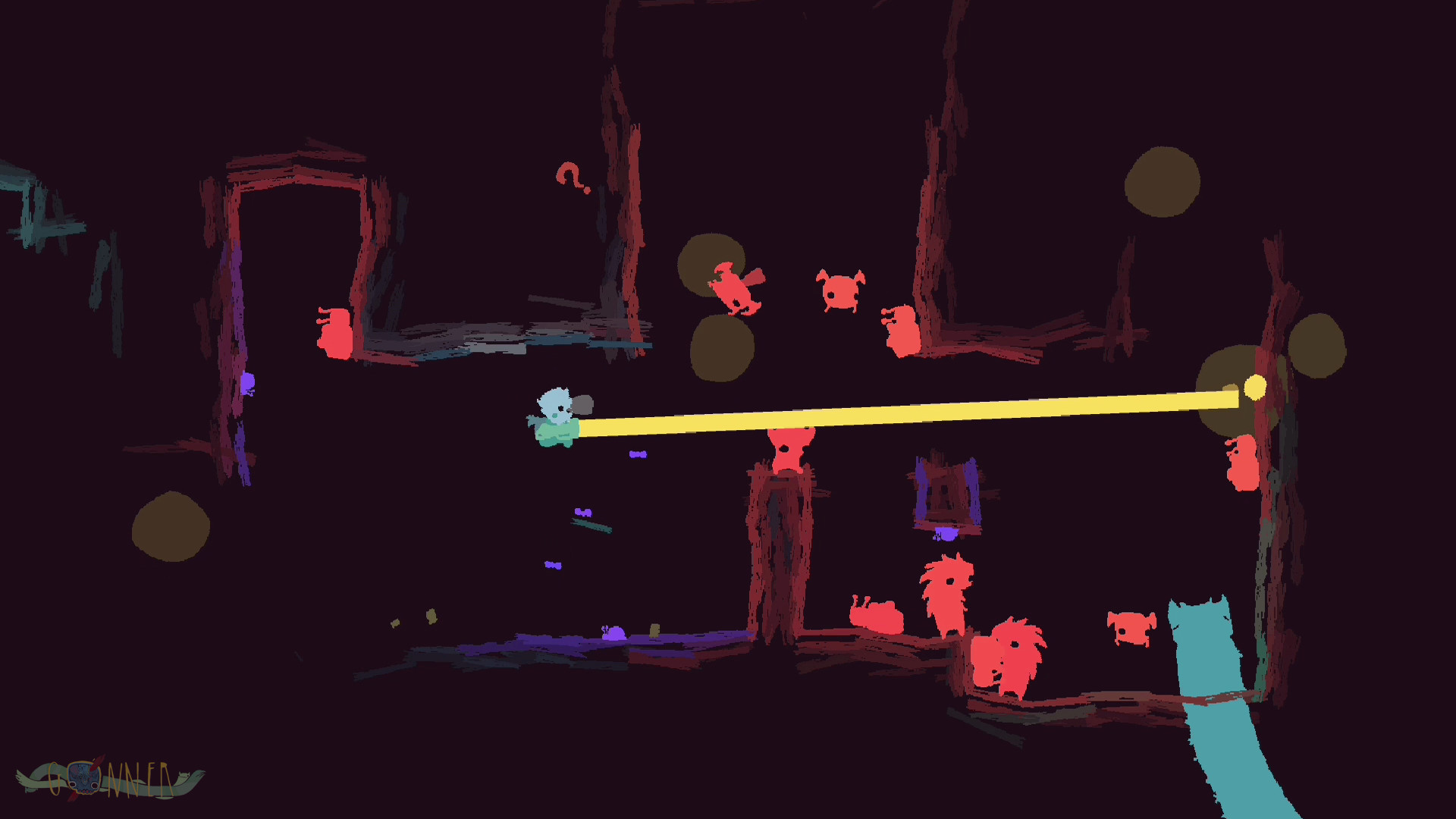 The boss I fought was a room filled with enemies and three large winged flying heads, each taking multiple shots to bring down. It was fun, but simple, and hopefully later bosses are a bit more advanced than just being what seemed like a larger, more aggressive version of other enemies. That said, the boss room was still a challenge, even if it was the first one. Certainly felt a sense of accomplishment once I got to the second level.

Between levels, you’ll be saying hello to your whale of a friend named Sally, and she is so creepy-yet-cute. Sally smiles largely as she sees you, with a brief heart emote. I love Sally, she is so flipping adorable. That brief gesture and emote was enough for me to want to go through hell and back to bring Sally trinkets to cheer her up. Lovely Sally.

Gonner oozes style, feels very hip while also feeling familiar, and is an all around joy. With the right amount of cuteness, creepiness, and difficulty, I found myself smiling the whole time while playing.

I can’t wait to get my hands on the full version of Gonner when it releases on Steam sometime this Summer.

[Correction: Originally stated this was in the metroidvania genre when it is better described as a platformer.]

[Disclosure: Hamza Aziz, who is currently employed at Raw Fury Games, previously worked at Destructoid. As always, no relationships, personal or professional, were factored into the preview. I personally didn’t work with Hamza at any point in my Destructoid career.]