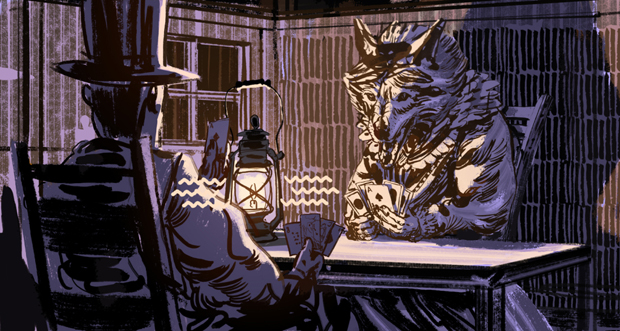 Sorry if the headline misled you. The Gone Home/BioShock crossover does not exist. Not yet anyway. If it ever does, it’ll probably come from Johnneman Nordhagen of Dim Bulb Games. Not only was he the lead programmer on Gone Home but he also worked on BioShock 2, and way back when, the “Rubber Duckies” PS3 tech demo. If only he could bring all three of those projects together somehow…

Maybe that’s what we’ll get with Where the Water Tastes Like Wine, Johnneman’s newly announced project. Like The Black Glove, another game from former BioShock series developers, it looks surreal and old-timey. Unlike The Black Glove, it’s a got a giant raven getting struck by lightning. Then it vomits the lightning, as a wolf casually watches below.