This time your arm is the tool

Survival games like Don’t Starve can provide some of the best moments in gaming. The early hours of trying to fathom how this new world works, the slow strengthening of self until you gain confidence, and the subsequent downfall due to your newfound hubris all etch into your mind and become the stuff of stories. But then you have to start over, rebuilding your fortress, recreating those same memories. What seemed so initially entrancing gives way to repetition and dwindling interest.

Whalebox Studio’s Goliath might be able to excise that dull monotony. 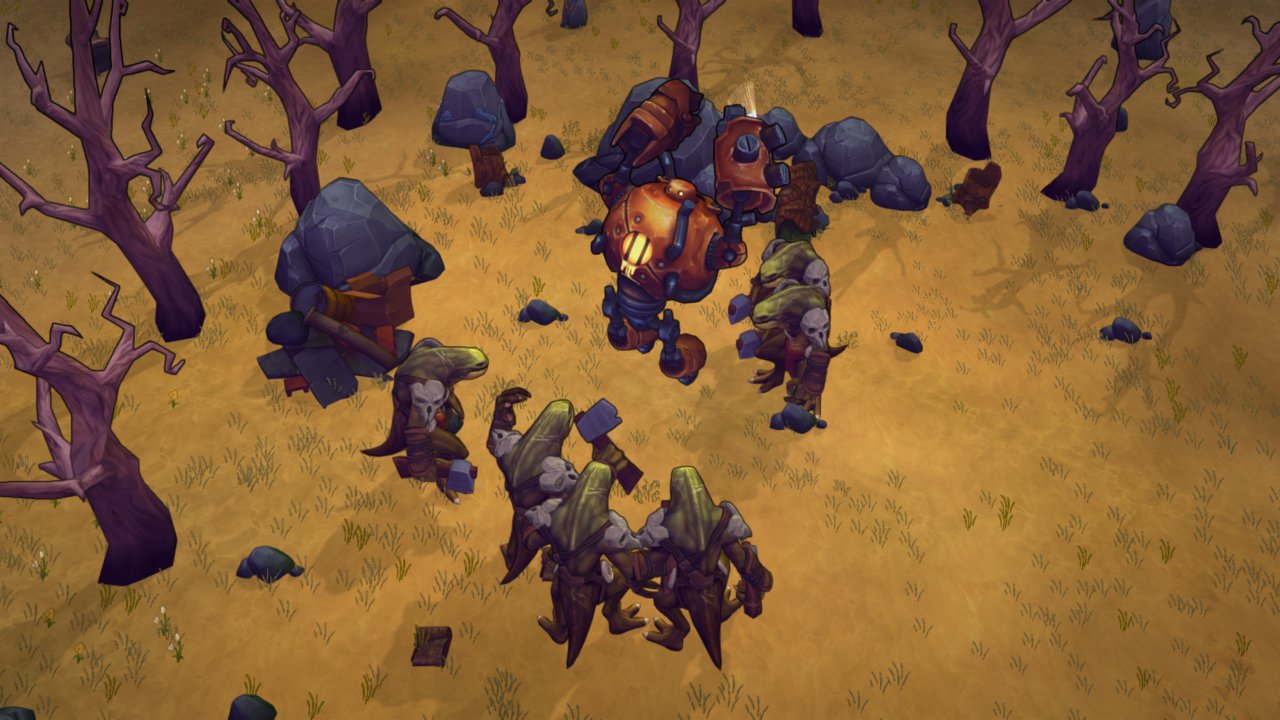 In a hands-off session with Whalebox, I got to see some of the mechanics setting Goliath apart from other survival games. Playing as a 1930s fighter pilot who finds himself in a bizarre coalescence of time periods and alternate worlds, you’re as likely to find a pyramid as you are a spaceship. Or lizard people. Or spacecrafts. Oh, and you have a fancy robot arm.

The arm’s purpose isn’t solely to make your anachronistic character look dorky; this limb serves as your axe, pick, or other resource gathering tool that you would have to create in another game. Since you start out with it, dying is less heartbreaking since you won’t have to gather rocks and logs just to build tools to begin your process anew.

You won’t have to wait long until you can build one of the titular Goliaths. I was told that you can access the first one, the Wood Goliath, within ten minutes of starting. Whalebox wants you to get right into the fray, since you can’t fight in human form. Since the denizens of the wild may find you to be a delectable treat, it’s usually wise to stay in your Goliath. If it’s ever destroyed, you get about 80% of your materials back so it isn’t too much of a grind to get it back up and running. If you need to get out to craft or forage, you can set it on autopilot to let it fend for itself. 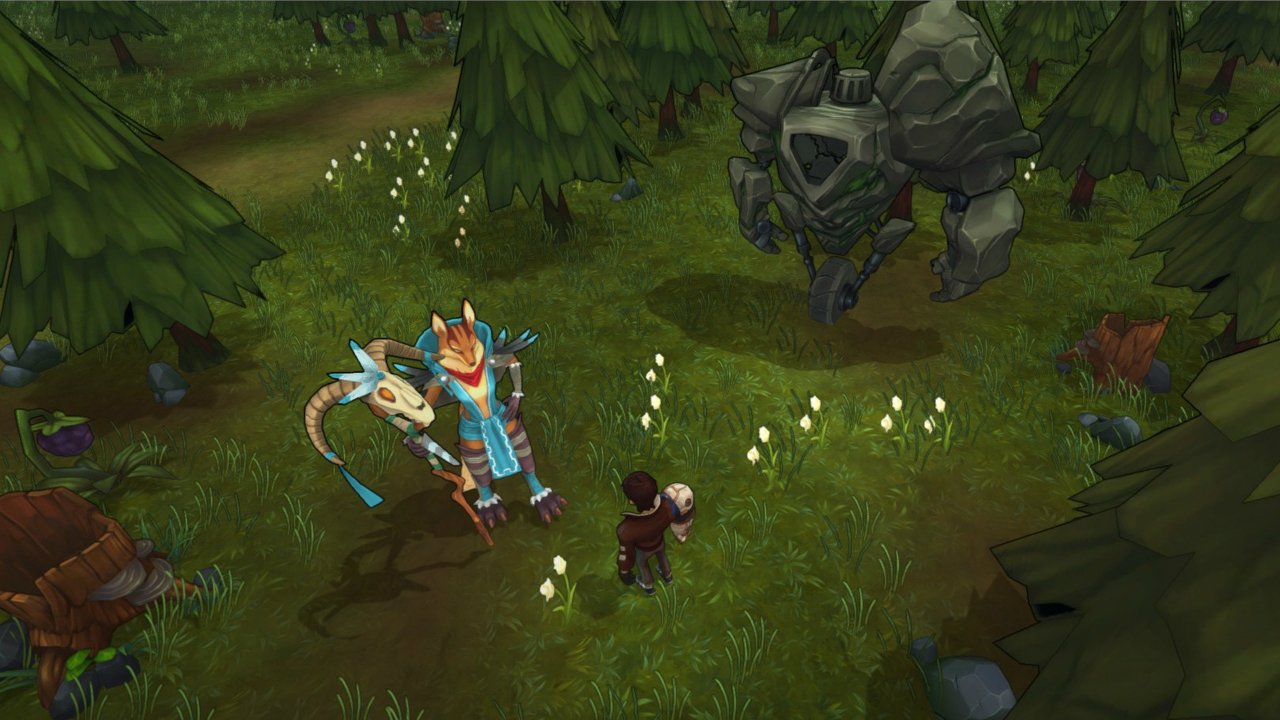 There seem to be plenty of options as far as Goliaths go, too. You can choose from three on the fly, but there are fifteen variants of the wood, iron, stone, and crystal types. You earn these variants via achievements; for example, using long-ranged weapons often can earn you a sniper Goliath. You can also draw on them to create your own custom designs, provided you find the right berries to create paint.

The stone type was my favorite out of what was shown in the demo. There’s a temperature gauge whenever you reach extreme climates, and the stone Goliath acclimates to these rapid shifts in heat. When in snow, it covers your rocky exterior and you gain a defensive bonus whereas fiery surroundings give you a magma form with flame damage. Combining all of this with head, torso, arm, and leg slots to customize means I’ll be spending most of my time trying to look fashionable.

We went through a few basic quests in the beginning that showed how strange this world could be. The first one that we saw was given to the player by a self-aware robot who wanted his pet robot bird back. After tracking down the bird, we learned that he had found a group of real birds and thought he belonged among their number. After that, we saw various factions, including the fantasy-esque Forest Folk (read: fox people), a group of religious robots who worship their creator, and some lizard people.

You can build reputation with these groups by doing tasks for them that start simple but become complicated. Since everyone that you meet was also warped into this new world, no one trusts each other. By aligning yourself with a faction you can earn special Goliaths, but midway through the game the opposing groups find themselves in an all-out war. You had better be confident in your choice by then. 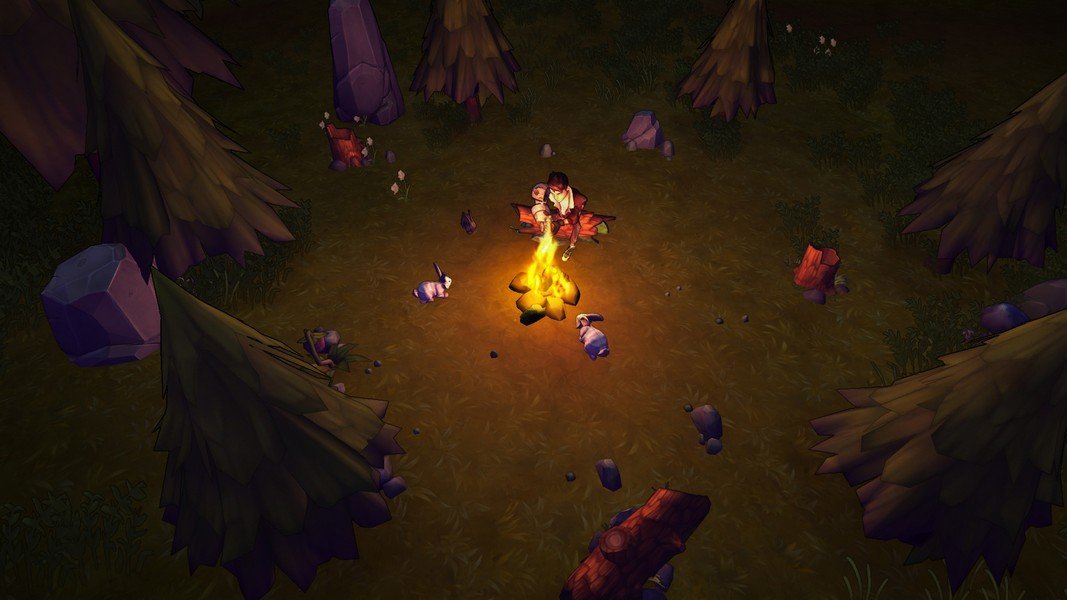 Though the world is procedurally-generated, it’s broken up into fifty levels called shards. They’re not very large, which eliminates the need for fast travel. Since this is more structured than an average survival game, death isn’t permanent. When I asked them how death would work, they had one of my favorite ideas I’ve heard re: video games in awhile. They’re not sure if they can get this to work yet, but they want several years to pass if your character dies. When you come back, faction dynamics will change and the world will look different. Everything you knew before has been altered in some way. Cool!

The story will have multiple endings and will be written by an Eisner-nominated comics writer. Though they only showed the fighter pilot, Whalebox plans on having more characters so that players can identify with what they see on-screen. They mentioned a female medieval knight who has been masquerading as male. The more options the better, as there is going to be both co-op and player versus player modes.

Four-player co-op will function similarly to Borderlands, where you can drop in and out of a friend’s game and get credit for completing your own quests. While the team is undecided as to how many players the versus mode will support, they are going to let you bring your own customized Goliath. A “Capture the Human” mode was also mentioned as a possibility.

While Goliath sounds enormously ambitious, even the early state in which I saw it showed promise. A survival action-RPG with a focused story mode, limited repetition, and customizable giant robots is right up my alley. It’ll be coming out Q1 2016 for PC, Mac, and Linux. Consoles are an eventual possibility.