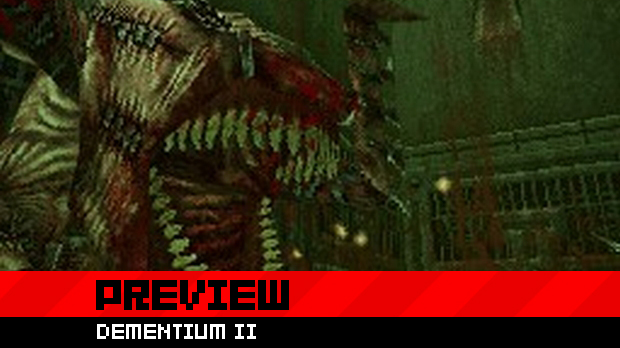 Dementium: The Ward was the first game by the folks at Renegade Kid. It was an impressive first outing for the company — they were able to make a great first-person shooter and survival horror game on the Nintendo DS, of all platforms.

Renegade Kid’s third offering for the DS brings us back to the world of Dementium, and I got a taste of the next chapter in this creepy series last night. A lot of the complaints from the first game have been addressed and my initial time with the game led me to believe that survival horror fans will be in for a treat when it comes to Dementium II.

Find out all about Dementium II after the break.

picks up right where the last game ended; however, you don’t need to know what happened in the first game to enjoy the sequel. The game begins with main character William Redmoor waking up in a recovery room. A nurse tells William that he’s been out for a few weeks after undergoing brain surgery, and that she has taken William back to his cell — oh yes, you’re in a prison. More specifically, the Bright Dawn Treatment Center, which is located in a small town in Michigan.

As soon as the player is given control of William, the game sends you into an alternate dimension. This happens throughout the game — you’ll be jumping back and forth between the real world and this Hell dimension a lot. Everything in the Hell dimension has a different look and design compared to the normal world. For instance, the bars that were keeping you in your cell room have a little opening now. You’ll find yourself hesitant in using this opening, though, as there’s a guillotine right above it.

The entire touch-screen interface has seen a vast improvement compared to the original Dementium. L or R is still used to shoot, the D-pad/face buttons are used to move (double tapping the buttons will let you run) and you’ll move the camera with the touch screen and stylus. In the center of the touch screen is now a mini-map showing where you have and haven’t visited. Below the map is your weapon and item storage. When you go to select a gun or item, you’ll touch and hold the inventory button and then slide the stylus to what you want. The game pauses when you’re in the inventory and resumes as soon as you lift the stylus from the screen. On the right of the screen is your reload button and an up/down arrow. The up arrow makes your character jump (double tapping the screen also jumps) and the down arrow lets you crouch.

After crouching to get out of the cell, you’ll start to make your way forward, where you’ll come across your very first weapon, the shiv. You’ll be able to hold ten weapons at a time, including pistols, shotguns and flamethrowers. You’ll still have a flashlight that you need to use, but it won’t take up a weapon slot now, and it’s possible to dual-wield the flashlight and weapons. But there are some weapons that you can’t dual-wield with the flashlight, such as the sledgehammer, which can also open up blocked passageways.

Once you have the shiv, you’ll encounter a few Chest Maw enemies seen from the first game. There are around a dozen new enemy types on top of all the bosses; the Chest Maw and the Mollusca (worm-like creatures) are the only ones being brought back from the first game. You won’t have to worry about enemies endlessly respawning like in the first game, either. Once a room has been cleared, it will remain clear upon revisiting the room.

As you make your way forward, a cutscene takes place, showing someone being hung by his arms from the ceiling. A couple of doors then open, and you get your first glimpse of the first boss as it runs through the room, eats the guy in one bite and runs away. As you’re fighting in this Hell dimension, you’ll come across a lot of — and this is the best way I can describe this — fucked-up shit. One room had a guy on a table as chains were being forced through various parts of his body. After moving forward a little more, William is then transported back to the normal dimension, but it’s not safe here, either, as there are prison guards out to get you.

Back in the real world, I came across a red vortex, which is where you can save your progress. The saving system from The Ward was the number-one complaint about the original, and Dementium II completely solves that issue by having the game auto-save every time you’ve gone through a door. So there’s no more back-tracking through the entire level if you die. Saving at the red vortex points will fully recharge your health, and you can now store health pills in your inventory, too.

You’ll eventually come across a operating room where you’ll meet the main baddie of the game, The Doctor. The Doctor tells William that whatever was in his head is now loose on the entire place, but before The Doctor can finish talking, the player is popped into the Hell dimension again and an evil version (more eviler version?) of the Doctor greets you. He basically talks some shit to you and then sets loose the first boss of the game. The boss is rather easy, but it takes a while to kill, since the only weapon you have is the shiv. The creature can crawl on the walls and ceiling, attacks you with its claws and occasionally vomits up Mollusca at you.

After defeating the boss, your goal is to get out of the prison. Along the way, you’ll come across some new enemies, such as the black cloud-like creature called the Whisperer (think Lost’s Smoke Monster.) It will slowly hunt you down wherever you move, and it can’t be killed. You have to avoid it at all costs — if you touch it, you’ll instantly be transported to a room where several Chest Maws await you. After defeating the Chest Maws, you’ll be transported back to the same room, where you can try again to get out. The audio quality in Dementium II is superb and you’re doing yourself a giant disservice if you don’t hook up a surround sound system or use headphones to listen to the audio and music. I seriously got creeped out by the Whisperer as it whispered spooky things.

Renegade Kid is really pushing their engine in Dementium II, and we’ll see a lot of different environments this time around. After getting out of the prison, you’ll set foot in a forest as snow falls. Your next goal is to get to the nearby town’s cemetery, where you have to dig up the grave of your dead daughter. Your wife has told you that you need to get your daughter’s body and bring it back to a specific location. You are literally using a shovel to dig up graves in an attempt to find your daughter’s body. You have to dig up the right grave, too; otherwise, you’ll get attacked by enemies. After you’ve dug up your daughter’s grave, you find a doll in place of her body. You now have to take the doll and place it on an altar; upon doing so, a giant blade comes down on the body and blood comes pouring out of the doll. It’s at this point that you, the player, start to really question your sanity. Was this really a doll? How could a doll bleed like this? Which dimension is the real one?

You don’t have much time to think this over, though, as the next boss in the game comes flying at you. That blade that pierced the doll is now usable — it’s supposed to be the weapon that can really harm the Wendigo Witch boss. There will be a number of limited-time weapons like this; you’ll discard them once they’ve served their purpose.

The Wendigo Witch boss takes place in a completely pitch-black room. The witch will fly at you from a random direction, and you have only a couple of seconds to figure out where she will be coming from. There’s an on-screen prompt that will clue you in, and her eyes glow red (you can see them off in the distance before she strikes). The witch can also have these walls come up from the ground that will hurt you on impact and make you drop your weapons. The goal is to strike the witch with the special knife, but halfway through the battle, I realized the shotgun worked a hell of a lot better in inflicting damage on her. Towards the end of the battle, the witch completely disappears and you see your wife crying on the ground. As you get closer to her, she turns into the witch and strikes at you. I knew that was going to happen, yet I still jumped in fear when it did. After the battle, the witch transforms back into your wife and you’re not sure whether she really was your wife or really the witch this whole time.

Dementium II will really fuck with your mind. The first game mostly just creeped people out, but Dementium II really wants to make players question their every action. Renegade Kid once again pushes the DS to its limits and I can’t wait to pick this up next year. There’s going to be around 12 hours worth of gameplay including some light puzzle elements, all running at 60 frames per second. Three difficulty levels and a survival mode round out this horrific package.

[Editor’s note: The UI for the touch screen is different in the demo I played compared to the images in the gallery. Also, there was no health bar or a note of what weapon you have on the top screen. Some of the images are from an earlier build.]