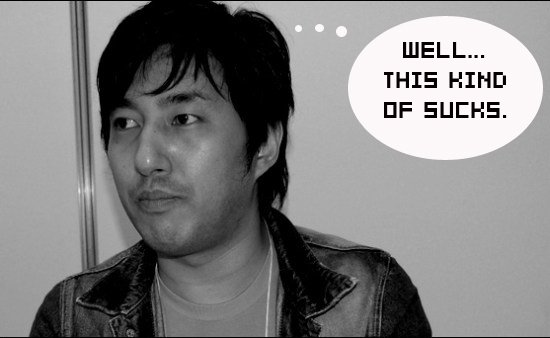 Goichi Suda, the game developer behind GameCube indie offering Killer 7 and the upcoming Wii title No More Heroes, recently commented on the state of the Wii and the games coming out for it, saying that third-party games weren’t doing well. Suda was quoted as saying:

“I am very surprised about the reality about Wii, because before I was making this game, I wasn’t expecting that Wii would be a console targeted only for non-gamers. I expected more games for hardcore gamers. The reality is different to what I expected.”

Suda is not the only major developer to voice such an opinion. It is commonly believed by many people that the biggest benefits of the Wii all go directly to Nintendo. As Nintendo do make good games, some people may not be phased by this, but for gamers who look forward to the offerings of third party publishers, it sounds a death knell for the future of third party contribution.

I don’t know about how you all feel, but some days I find it harder and harder to like the new “non-gamer focused” Nintendo.

[Via MCV — Thanks, Jonathan]

Filed under... #Does it suck?#No More Heroes