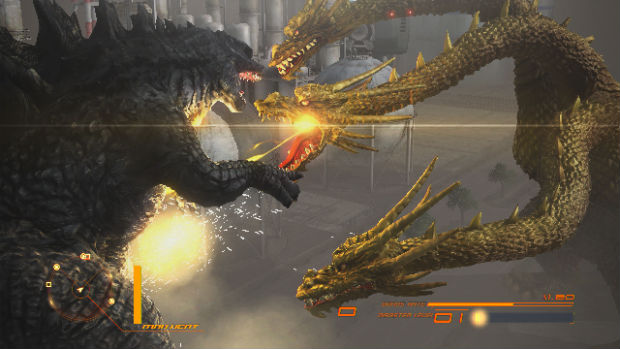 Fun fact. When I was a child, my mother sat me down in front of Godzilla films and subsequently burned them into my brain. As a result, I ended up learning Japanese and moving to Japan as an adult. It’s not a stretch to say that I’m where I am because of the big G.

So you can imagine my excitement when I heard that Bandai Namco was developing a Godzilla game for the PS3. The big monster has had more than his fair share of game appearances, but none of them have ever been any good. I recall playing Super Godzilla on the SNES and trying my best to convince myself that it was the best game I had ever played. Needless to say, I had some issues believing my own words.

Despite my not-so-great history with Godzilla games, I rushed toward the Bandai Namco booth at TGS to get my hands on the latest title. The demo was about ten minutes long, and I played as Godzilla in what appeared to be some kind of power plant or oil refinery. I was tasked with destroying as much of the area as possible, all while fending off military attacks and annihilating defense structures. After a brief appearance by Super X (of Godzilla 1985 fame), King Ghidorah appears on the island as the final boss of the demo. The whole experience was relatively short, but it gave a good indication of what the various missions might feel like.

More than anything else, what stuck out to me the most in my time with Godzilla was the authenticity of every sound effect, piece of music, and monster animation. Much to my surprise, rather than composing original generic themes for the game, Akira Ifukube’s legendary music tracks have been utilized. There’s something empowering about watching Godzilla stomp around to his own memorable theme. Even the sound effects appear to have been taken straight out of Toho’s vault. King Ghidorah’s cackle, the sound of his energy beams, and even the maser sound effects are 100% accurate to what fans of the series know and love. The two giant beasts in the demo have been modeled and animated lovingly, with little touches like finger and mouth movement standing out the most. This feels like Godzilla, and that simple fact helped to elevate the whole experience. It’s safe to say that they were going for nostalgia, and it works.

Controlling Godzilla wasn’t difficult, but it took some getting used to. The left analogue stick on the Dual Shock controls G’s primary movement, while the L1 and R1 buttons rotate him left and right. Square button is the basic arm attack, and moving the analogue stick while attacking resulted in a wide-reaching tail swipe. The triangle button fires off Godzilla’s signature breath attack, while the circle button is used for grabs and throws. The X button functions as a charge/dash attack. I was impressed by how weighty the monster felt, especially compared to some of the older 3D Godzilla games. You can feel each step, each hit, and each fall; this is no high speed character action game.

It wasn’t all sunshine and rainbows though. While the city destruction felt and looked great most of the time, Godzilla has some major slow down problems when too much is happening onscreen. At one point, I used the breath attack to lay waste to a set of buildings, and the game struggled to keep things moving at a decent framerate. Additionally, the textures on some of the environments and buildings weren’t too hot. This wasn’t immediately noticeable while playing, but during some of the in-game cutscenes it was certainly a bit jarring. The two PS3s running Godzilla froze multiple times while I was waiting in line, so I’m crossing my fingers that that won’t be an issue in the final game.

I came in with low expectations, but I walked out of my time with Godzilla both hopeful and excited for the final release. The world needs more games about playing as giant monsters, and this looks like it might fit the bill. Hopefully the recent film’s success can convince the folks up top to give Godzilla a chance in the west.