I thought I was a nice person…

I have found myself both playing and looking forward to more and more “point-and-click” games in the past few years than ever before. I didn’t grow up with games like Day of the Tentacle or the Monkey Island series, so there’s no strong sense of nostalgia for games of the genre, but recent titles have offered up more than just obtuse puzzle solving and witty dialogue. Kentucky Route Zero for example has no puzzles, but the atmosphere and mystery of the universe have me highly anticipating the next episode.

Gods Will Be Watching is yet another point-and-click game that has my ears perked up more than ever. This is a game focused entirely on puzzles and micromanagement of characters. It’s stressful in all the right ways, and difficult without being obtuse. After playing (and failing) at PAX East, I’m itching to get another crack at it, and I only played one scenario!

Gods Will Be Watching began as a game jam game, but the reception was so good that the developers, all five of them, decided to expand the concept into a full game. Players are put into an unfavorable scenario with the simple task to handle it. The scenario at PAX was in some sort of hi-tech facility, where my team of brigands had already captured 4 hostages, and a SWAT team-like force was bearing down on us. I had to buy enough time so my buddy could hack the entire system in order to escape.

The hostages proved a big problem to tackle. When clicking on the hostages, I had a myriad of options including to calm them down, shout at them, kick them, or kill them. If I was too mean to them, they could try to commit suicide. If I was too lax, they would take advantage and mutiny. I never did find the right middle ground, since my first attempt was very brief as the SWAT team killed us, and the second time each and every hostage tried to run out, leaving me with no collateral.

Keeping the SWAT team at bay was a matter of using one of my other cohorts to either fire at them or to negotiate. Either one would help postpone their march, buying me more time to finish the hack. Another ally could charge up his hack boost, and it could be unleashed once it got to an acceptable percentage. He could also display another screen on a camera, allowing me to keep an eye on how close the SWAT team actually was to the room. 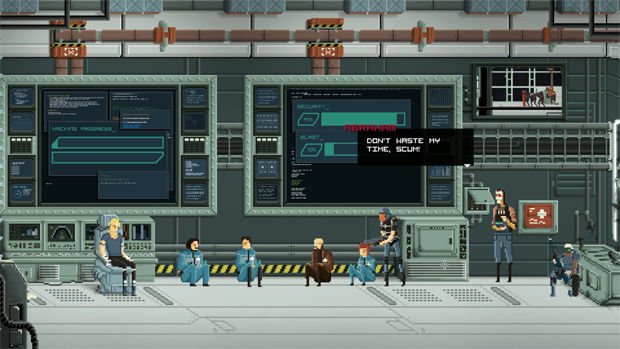 You have to be an awesome juggler to succeed at Gods Will Be Watching. If you get too caught up with one thing, say, the hostages, another will come and bite you in the butt (like the SWAT team). Scenarios are very tense, making it very easy to lose concentration and blow an entire scenario. It’s also a game that will test players’ ethics and resolve, making it a game that’s also incredibly enjoyable to just watch and see how certain people react to certain scenarios.

Gods Will Be Watching will be out in June for PC. You can play the original game jam game here.