[Electronic Arts has provided us with a neat Godfather II exclusive — a blog posting from Jehanzeb Hasan, part of the game’s QA testing team. Hasan talks a bit about the curveballs the game throws the player’s way, generating the unexpected and keeping you on your toes.

The post will appear on the official Godfather II Web site later this week, but we have the early exclusive for Destructoid readers. Enjoy.]

The hour is late and a myriad of babbling voices trickle through the lobby of La Maison Rouge. Amidst the clinking of glasses and the idle chatter of some of the evening guests, a rumor has spread — something has happened in one of the rooms upstairs. Quietly, a fairly dressed gentleman, middle-aged and balding, steps out from the room in question, and adjusts his tie. He surveys the corridor and carefully shuts the door behind him.

The muffled voices grow louder and some of the house regulars are bold enough to crane their necks past the grand chandelier and catch a glimpse of the man standing near the railing upstairs. He appears calm, a bit satisfied, waiting for something or someone, perhaps … and that’s when YOU step into the scene. A momentary flash of recognition sweeps through the hall and lingering eyes begin to meander elsewhere, gazes are lowered, and faces turn back to their drinks. Whatever it is, it must be Corleone business — and the less you know, the better. 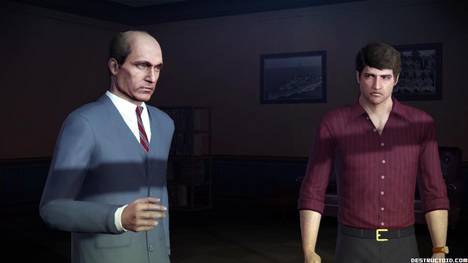 When you’ve played through this section of the game as many times as I have, you should have a pretty good idea of what to do next. My usual game plan is to navigate my way through a brief conversation with Tom Hagen before heading off to the airport and booking a ticket to South Florida… but this doesn’t always play out as expected. Such was the case on a recent playthrough.

I was deliberating over tactics with Tom when I heard a series of gunshots outside. Screams broke out amongst the crowd downstairs as a gang of lower-level grunts rushed through the foyer and began shooting up the place. I hastily quit my conversation with Tom and ran down the stairs, calling up a few of my made men to hurry over and help defend the building. I had neglected to hire enough guards to watch over the venue, so what I was dealing with now was the direct result of some of the stinginess that had influenced my earlier, poorer decisions.

After barreling through the front doors, guns blazing, with my crew, I ran into a couple rival made men (higher level members of another crime family) and their goons, who were firing off shots, bunkered behind one of their cars. It was tough fighting throughout, but it wasn’t me or one of my subordinates that ended up winning the battle for the Corleone family. Rather, to my surprise, it was Tom Hagen who followed us out and ended up tipping the balance in our favor.

Although I had already played through this section of the storyline numerous times, the scene that played out on this particular playthrough was an entirely unique experience — a dynamic event made possible in part by the impressive strategy game at the heart of The Godfather II. Because your foes are constantly plotting and making calculated moves, anything is liable to happen at any moment in the game. This means YOUR story as a member of the Corleone family may not necessarily be the same as another player’s story. These kinds of spontaneous events that unfold throughout the game make each and every playthrough a new experience. 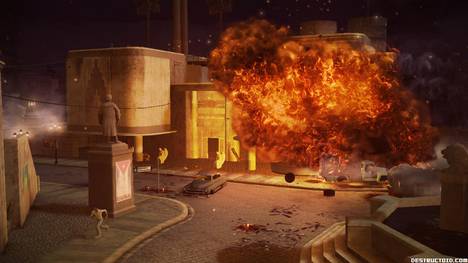 Take, for example, another case… Only a couple days ago, I was planning my conquest of Queens and had just arrived at one of the local appliance stores held by a rival family. I had just stepped onto the sidewalk with a few of my henchmen, when a sudden, loud, glass-shattering explosion threw me back in my chair. Another family had bombed the venue just as I had arrived and foiled my attempt at extorting the business. I was fortunate I hadn’t arrived a moment sooner; otherwise, who knows what would’ve happened!

There was also the time I was on my way to a meeting with another Don when I came across a firefight taking place inside the entrance of a major packing warehouse. I pulled back on my emergency brake and swerved to a halt before exiting the car with my lieutenants, rushing in to investigate. Turns out, what I had stumbled across was a serious gunfight between two families vying for control over a VERY valuable crime ring. Both families–the attackers and defenders–had seemed to have taken significant losses in the skirmish. There were just three attackers remaining with only a handful of guards left. Because this particular building was usually/always packed with guards, I knew this was the perfect opportunity for me to intervene and take the prize for myself. I moved in and cleaned up, and in no time, had myself a highly sought after, money-making racket. This unexpected takeover motivated me to adjust my plans and prioritize one crime ring over the others I had originally been targeting.

There’s always something going on, somewhere in the living world of The Godfather II. As much as you plan, and as much as you think you know what might happen next, you’re bound to run into some surprises! I’m looking forward to hearing all of your stories when the game ships in February!