The God of War Ragnarok Ormrs are the epitome of “annoying enemy,” and you’ll encounter them fairly early on in your adventures. All they take is a quick hit, you just need to get behind them so they can’t dodge.

In case you forgot, you can return to the Aurvangar Wetlands via Svartalfheim: which is the right-most rune on the world map fast travel screen.

The Aurvangar Wetlands are a fully selectable location on the map, located in the south of the region. 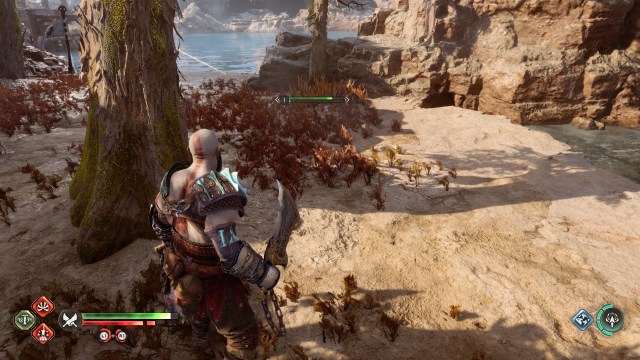 If you try and attack the Ormr head-on, it’ll dodge/burrow around your attacks. For the scripted story-related Ormr, you just need to walk over to the little landing bridge behind it, and throw your axe at it from behind.

If you’re interested, here is the full lore entry for the Ormr enemy straight from the in-game tome:

A mysterious creature. Mimir tells me it was born from an ember that escaped Surtr’s hammer as he worked his forge. The steward of Muspelheim used his bellows to breathe life into the ember, and its first act of existence was to steal and consume the previous metals the smith had been using to forge a weapon. Mimir tried to tell me that Surtr found this amusing. Were I Surtr, I would not be amused.”