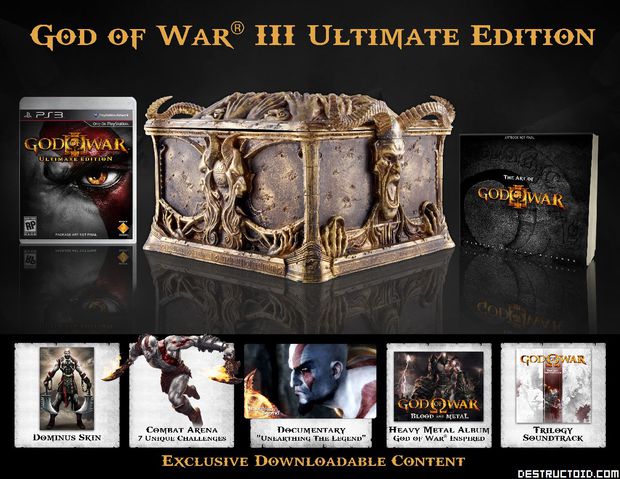 Sony has announced the God of War III Ultimate Edition, and you’d better make some room for this one — it’s massive.

The ultimate edition comes in a sculpted replica of Pandora’s Box, as well as a Limited-Edition God of War art book with exclusive art, content, and interviews. There’s also a bunch of digital content packed in, all of which will be available via the PlayStation Network after redeeming a voucher code at

This massive collection of God of War goodies will run you $99.99.

Also announced have been pre-order details. Order from GameStop.com, get a “Phantom of Chaos” skin for Kratos. Order from GameCrazy, you’ll get a “Forgotten Warrior” skin. Finally, ordering from Amazon will get you a — wait for it — Kratos PlayStation Home Avatar “Apollo” skin.

Images of the GameStop and GameCrazy Amazon pre-orders can be found after the jump. You’ll just have to imagine what a Kratos PlayStation Home Avatar looks like for now.

[Update: Sony had made an error in its initial announcement — Amazon pre-orders will not get a Kratos Home Avatar. They will get the Apollo skin. Given the mix up, we checked with Sony to see if a Kratos Home Avatar would be offered through other means, and were told there are no plans “at this time.” Boo!]