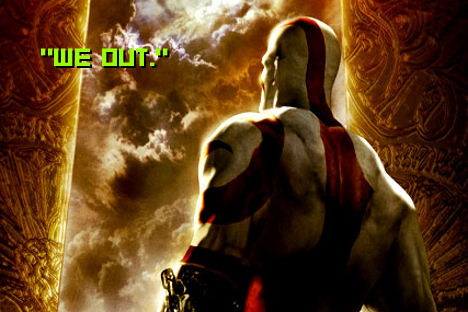 Despite the PSP’s increased success in Japan, the format is still struggling to get some love outside of the homeland. The latest word is that God of War: Chains of Olympus developer Ready At Dawn is now “done” with the PSP and has sent back its devkits.

“With Chains of Olympus going gold in Japan, we’re now officially done with PSP development,” announced the studio, which also worked on the PSP spin-off Daxter. “So today we sent all our devkits back and seeing all these boxes ready to be picked up definitely marks the end of an era here at Ready at Dawn. Can’t wait to show you guys what we have in store.”

Well that’s a shame, since God of War, despite being ridiculously short on the PSP, was a pretty good slice of portable violence. I really feel bad about the PSP’s run of luck, since it’s a fantastic handheld that just can’t seem to catch a break over here. Still, with sales going strong in Japan, I doubt Sony is weeping too hard.