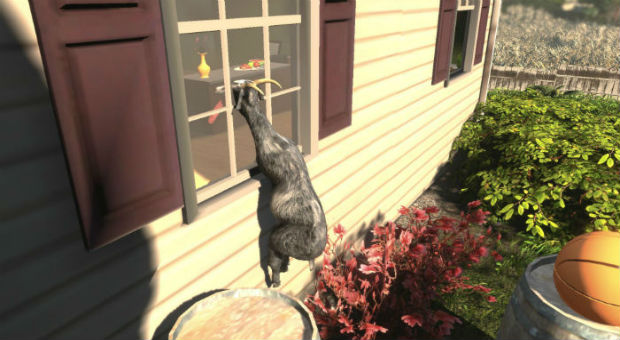 Are you ready to headbutt cars and lick strangers? Me too. How about in-game, though? Get ready to do it all over again with Goat Simulator’s upcoming physical release in the UK.

Koch Media announced today that a retail version of the devil farm animal sim would be hitting store shelves on May 23. There’s no additional content to speak of, but you do get a cool box with a goat’s face on it. I mean, one would hope a game called Goat Simulator would feature a goat’s face on the box though, right?

Unfortunately, despite today’s announcement via developer Coffee Stain Studios, there’s no word yet on pricing or any possible trinkets one might be rewarded with for preordering. Personally, two small goat plushies of Goat Simulator characters I have affectionately nicknamed “Supa Scoopa and Mighty Scoop” would be an acceptable preorder bonus, but then again I live in the US and this would be totally irrelevant to me. I’m still excited, though.

Also, goat parkour is about to hit with the upcoming 1.1 patch. Holla.

Goat Simulator to rampage across the UK in boxed release [Joystiq]