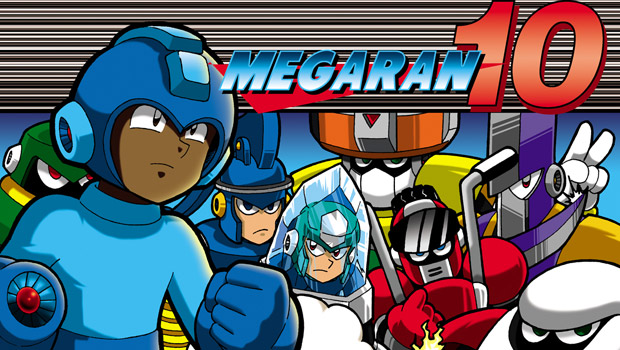 The release of Skyrim may have kicked off the holidays for some of you fine folks, but for me, November 11 was Mega Ran Day! After months of waiting, nerdcore rapper Random has unleashed the final album in his Mega Man tribute series, Mega Ran 10. I listened to the whole thing this morning, and now you have to sit there while I do my gushing fanboy bit.

For those two people who still aren’t familiar (shame on you!), the original Mega Ran in 2007 was a landmark event that blew up on the web. The marriage of classic Mega Man tunes and hip hop beats was so fresh that Capcom has fully endorsed Random as an artist. When Capcom released Mega Man 9, Mega Ran 9 was naturally just around the corner. Sourcing on a single game this time, the album was a lot more focused and polished with some truly standout numbers. In fact, you can catch the “Splash Woman” instrumental hiding all over TV and even on the Dtoid Show!

Unlike those two previous projects, Mega Ran 10 wasn’t conceived as a full album. Random was just planning on releasing a few pieces here and there, but fan support convinced him to compile everything into one big track list. As a result, the album isn’t as cohesive as the others, but that just gives the individual songs more time to shine on their own.

Sample the album right now at the link above, or hit the jump if you need more convincing.

Again, not all the tracks on the album are new. However, the “album versions” of previously released songs have benefited from remastering and audio adjustments. I was surprised by how incredible some of the songs were, considering that the original Mega Man 10 soundtrack is not as immediately catchy as its predecessor’s. He was even able to transform Commando Man’s theme, one of the weakest songs in the game, into an incredible, bass-thumping anthem (“Commando“).

As before, Random incorporates game narrative into his lyrics, giving voice to a warrior robot’s struggle against a foe he’s ill equipped to handle — a computer virus (“Sick!!“) that has infected the world and turned friends on each other while leaving others on the brink of death. In between acts, he drops a little bit of social criticism such as with “The Day The Robots Took Over,” a song about our reliance on technology and the Internet to do what we once were capable of accomplishing on our own. Then, as salt on the would, he laments the cancellation of Mega Man Legends 3 and the downward spiral the franchise seems to have taken while reminiscing about the old days (“Mega Man Forever“).

“Team-up” is the name of the game, and Random grabs plenty of outside talent for a bulk of the album. Even the Dtoid community’s own guitar god, Torzelan, gets his shreds on (“Bassnium“)! Probably my favorite track is “Pump It Up!” featuring guest Adam WarRock as Protoman. The duo unite to take down Pump Man, engaging in a lot of back-and-forth banter while they hype themselves up. There’s even time for a surprise Step Brothers reference! Who could have seen that coming?

Overall, though, it’s not the best of the Mega Ran series, due in part to the how disjointed it feels at times as well as some weak musical picks here and there. Still, it still kicks a lot of ass; I know I’m going to blasting this album through my speakers almost nonstop for the next month! The rest of you, BUY MEGA RAN 10 now!