Hey guys, things are obviously getting a little tense here the past couple of days. As someone who’s only lurked in the forums every once in a while, I’m only aware of bits and pieces of what’s going on right now with everybody. People on both sides of this whole situation have not been as communicative with eachother as they should be and there’s all sorts of talk about people leaving and cerain aspects of the site being changed to try and reel in more readers. Again, I don’t know the whole situation but as it stands right now it sucks for everybody involved, even those of us on the outside looking in.

I’ve been dealing with some pretty heavy stuff outside of the website so to come back to the website and see all this drama going on honestly hurts. This website is one of the things that helps keep my mind off some of the more painful stuff going on in my life and has helped me vent out some of my feelings and frustrations when I’ve needed to the most. Everyone here has been so great to me and I love communicating with each and every one of you. So to see all this talk about people leaving, getting banned, taking breaks, etc. is rather disheartening.

This blog was originally going to be a lot more personal. My father, Michael Joseph Hogue, passed away the other night surrounded by his family and friends after a long hard battle with multiple illnesses. He was one of the nicest and most caring people on the planet and was loved by so many. He has been there for me and supported me all my life and I am incredibly grateful to have had him as a dad. I love him with all my heart and I will miss him every single day.

I’ve talked about my mom on another blog and how she helped introduce me to video games, but I haven’t talked about my dad much who was just as important to introducing me to video games. After all he bought my mom her Super Nintendo in the first place which she would introduce me to years later. My dad wasn’t a gamer per se but he still had a legitimate interest in video games. I did get him to play some games with me now like Goldeneye 64 and even played Ghost Recon with him over the LAN in our house.

He bought me pretty much all the major consoles up til the Xbox 360. I very vividly remember the day my dad and I went to Toys R Us to buy my Virtual Boy.  I remember him putting together my 7th birthday party and finally getting my N64. I remember Christmas morning and opening up my Playstation 2 and going with him to the store to get games for it. While most of my friends had rather strict parents who wouldn’t let them play violent games or only let them play games every so often, my Dad was much more liberal and had no problems getting me games like Grand Theft Auto 3 and Dead or Alive Xtreme Beach Volleyball.

I know all this doesn’t really have to do with what’s going on with the website right now, but my point is that right now everyones emotions are really riding high and we are all pretty on edge about all sorts of things. I had never actually heard the term STFUAJPG before coming to this website but it quickly became one of my favorite mottos. The whole attitude behind it is what brought me to the website in the first place. A site where people aren’t constantly bickering at eachother over irrelevant crap, but instead are actually communicating and sharing our mutual love of games and the culture surrounding them.

It’s an attitude that my Dad would be very much behind. Don’t keep your head wrapped around drama and get yourself down. Just try to have fun while you still have a chance to. He was very much a here and now person and didn’t dwell on the past or worry about the future. Life is too short and who wants to waste it constantly biting at eachothers throats. Instead use every moment you have of it to it’s fullest and live your life to it’s max. 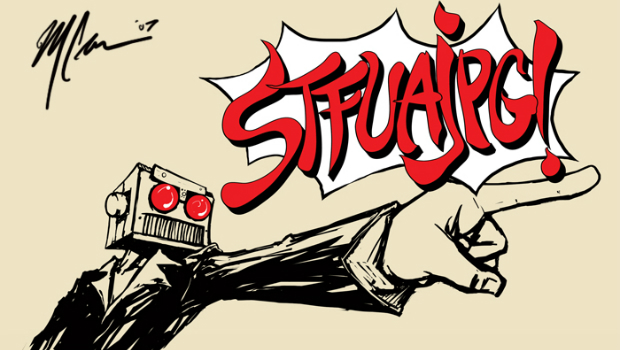 Now is a time I think a lot of us need to STFUAJPG for a little while. Many people are talking about taking a break from the site and I can’t really blame them, but hopefully everyone can come back after some time and we can reignite what made this place the site that attracted me here in the first place. I just don’t want to see the place I’ve finally come to accept as my “internet home” go away. I love it here so much and I honestly don’t know where I’d go if this place was gone.

One last thing, to those that are able to, please let your Dad know just how much he means to you