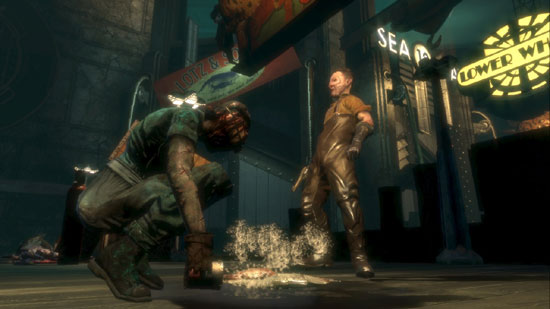 Perhaps you PC gamers have heard a few Xbox 360 owners talk about this demo for some game called BioShock. Word on the street is that it’s pretty good or something. But hey, don’t listen to me: I’m paid to say that the game is awesome, right?

Elizabeth Tobey, community manager over at the Cult of Rapture, has revealed that the PC version of the BioShock demo will be available tomorrow, starting at 7 PM EST. FilePlanet members will get exclusive pre-loading privileges, so along with your new PC that you’ll be buying to play BioShock smoothly, you might as well sign up for a premium FilePlanet account. What’s a few extra dollars when you’ve just dropped $500 on a video card?

PC gamers, prepare to gloat — Voodoo Extreme says that the PC version of BioShock “outclasses” its console “Little Sister,” sporting higher resolutions and slicker controls. Though after having played quite a bit of the Xbox 360 version myself, it’s hard to believe it can get much better.

[Update: The demo is now available for downloading over at FileFront. Go get it, guys!]