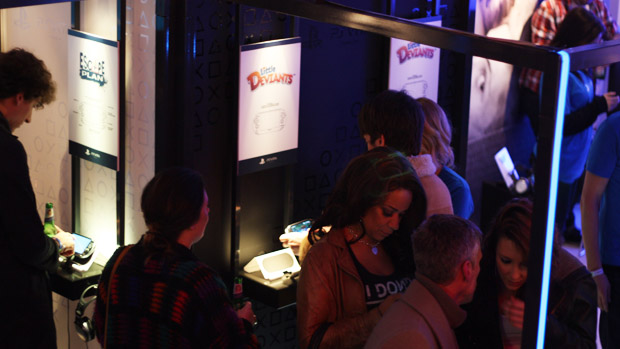 With the PlayStation Vita arriving in Europe next month, the guys at PlayStation Access are on tour with “Vita Rooms”, bringing the handheld to various locations around the UK. Starting in Manchester last night, they will be staying until the 18th when they will move onto Glasgow and then down to London.

The Vita Rooms are a great chance for the community to get some hands-on experience with some of the big titles including Uncharted: Golden Abyss, Motorstorm RC, FIFA 12, Wipeout 2048, Reality Fighters and more. Members of the team are also there to tell you when to touch, where to touch and ensure you get the most out of the exciting new console.

I went along last night to the Manchester Vita Rooms for the launch of the tour. Amongst all the blue lights and decorative set pieces, I managed to have little go on some of the highly anticipated launch titles like Wipeout 2048, Uncharted: Golden Abyss and Little Deviants, which was actually a lot better than I first expected. Out of all the games I tried, Little Deviants really demonstrates and explores the Vita’s controls and user interface the most.

This kind of event is a great way to reach out to the community, and if you’re interested in going all you have to do is check out their event page to sign up for one of the parties or just go along during the day in a location near you. For you crazy peeps in the U.S., Hamza tells you where you can get touchy and intimate with a Vita here.

For more info on the Vita itself, check out Dale’s in-depth impressions.