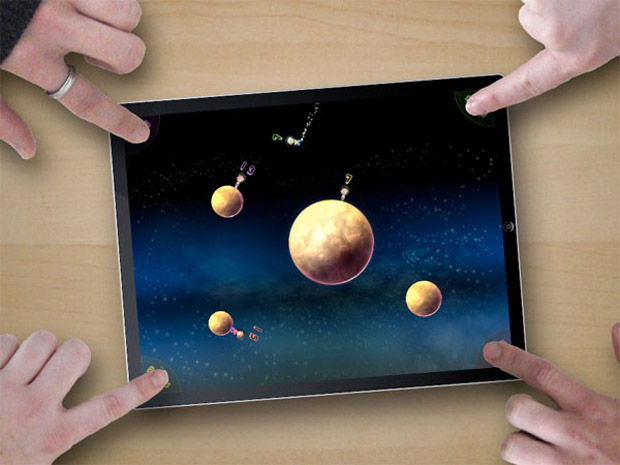 Here’s an iPad-only four-player party game called Globetrotters. It was originally conceived as a Flash game last month, and now it’s being prepped for Apple’s tablet computer. It comes from known iPhone devs studio radiolars and Broken Rules, the folks behind And Yet It Moves. The two studios have come together to create independent games label Broken Radio Games, a platform for collaboratively developed experimental games.

In Globetrotters, up to four players will play on the same iPad, trying to catch stars in space with a jet pack before any other player does, bouncing from planet to planet Running on the surface of a planet slowly shrinks it until it is gone. The last one on a planet scores the most points. The first player to reach 1000 points wins the game.

If you’re curious, there’s a Flash version of the game here.

Globetrotters looks and sounds pretty interesting. I’m glad to see that devs are already jumping on the iPad’s multitouch functionality for multiplayer games. And at $0.99? What’s there to think about?