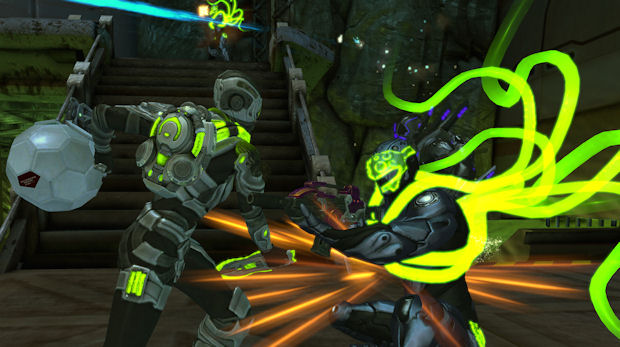 Global Agenda, the promising MMO/shooter hybrid from Hi-Rez Studios, has launched today with its Conquest mode free-to-play until March 3. You can nab the bastard for $44.99 on Steam right now, or rush out to buy the special edition if you’re into that kind of chicanery.

I played the beta and liked what I saw in terms of potential. However, there were balance concerns and it would seem that I was lacking in direction as there were a few things I was unsure of. Nevertheless, the game has the makings of a great PC shooter with a lot of longevity, and is well worth keeping an eye on.

If we haven’t already pissed off Hi-Rez enough with the beta impressions, then there might be a review. So yeah, stay tuned for that. Maybe. Or not. We don’t know.

ATLANTA, February 1, 2010 – Global Agenda, the award-winning team-based shooter-MMO from independent developer Hi-Rez Studios, launches today.
Set in Earth’s near future, a ‘spy-fi’ world of advanced technology and player-driven conflict, Global Agenda’s fast-paced, action-oriented massively multiplayer online game is Hi-Rez Studios debut title and has been in development since 2005.
Players in Global Agenda can experience both co-op and competitive multiplayer shooter features after a one-time purchase of the game.
An optional subscription package, called “Global Agenda: Conquest” is available for players who wish to participate in a massive-scale game of territory control on a persistent world map.
As a special agent playing only the non-subscription features, players can fully level eight different agent characters, participating in both player-vs-player and cooperative missions, as they infiltrate locations belonging to a totalitarian faction, The Commonwealth, and establish themselves inside the game world.
Players in Global Agenda: Conquest form their own groups, called Agencies. These Agencies conquer territory, construct facilities, manufacture vehicles, raid bases, and engage in formal and informal alliances and betrayals on their way toward world domination. The Conquest meta-game revolves around player-driven politics and strategy with each battle being resolved via squad-based combat.
All players who purchase Global Agenda receive free access to Global Agenda: Conquest until March 3, 2010.
“Our vision for Global Agenda was to combine elements from our favorite genres: the combat of a team-based shooter, accessible character progression of a role playing game, and emergent conflict, production and politics between player-formed groups competing for limited territory like a giant strategy game”, said Todd Harris, Global Agenda Executive Producer. “Plus jetpacks, because who doesn’t like jetpacks?!”
Global Agenda is available for purchase from Steam, Amazon marketplace, and directly from Hi-Rez Studios at www.globalagendagame.com.
About Hi-Rez Studios Hi-Rez Studios, Inc. was established in 2005 to create exceptional online interactive entertainment. It is located just outside of Atlanta, GA. For more information, visitwww.hirezstudios.com.
Global Agenda, the Hi-Rez Studios debut title, is a fast-paced, action-oriented, massive multiplayer online game set in the Earth’s near future – a spy-fi world of advanced technology and player-driven conflict. To learn more visit www.globalagendagame.com.