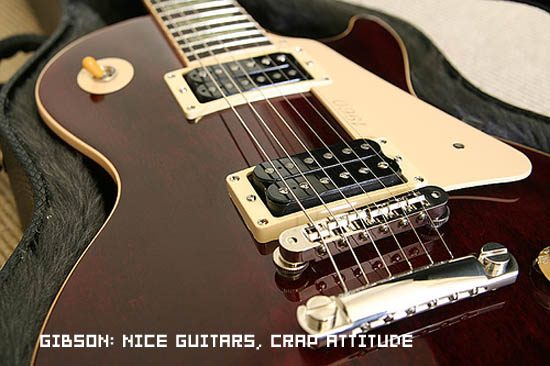 Cue the microphone feedback and awkward crowd silence. It seems that guitar maker Gibson has pulled the cord on a seemingly fine working relationship with Activision.

What happened, guys? Activision and Gibson were getting along fine up until now. Gibson licensed their guitar designs to the game maker, and they were used Guitar Hero’s controller design as well as in-game.

I guess the wild success and crazy sales of the series games weren’t enough for Gibson. In January, they sent Activision a letter saying that they had a 1999 patent on a technology that simulates a musical performance. They’re now wanting Activision to obtain a license from them, or else stop selling the games.

I think Activision was as surprised as we are. They filed a lawsuit asking the United States District Court for Central California to declare Gibson’s patent invalid and to bar it from seeking damages.

“Gibson is a good partner, and we have a great deal of respect for them. We disagree with the applicability of their patent and would like a legal determination on this,” Activision general counsel George Rose said in a statement.

Here’s my question: Why the hell did Gibson wait so long? Was it that they weren’t making enough from the deal?