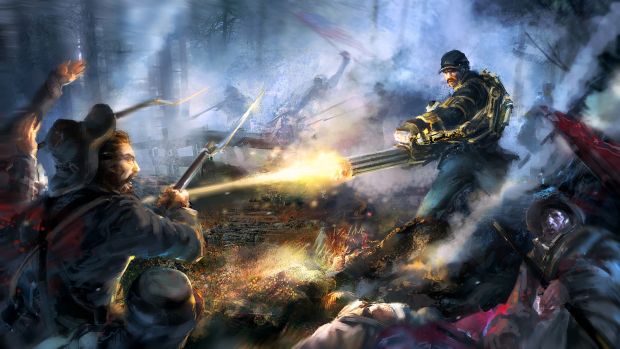 Think back to the American Civil War. Now think how the war would have been had there been tanks, mini-guns, and even zeppelins! That’s what developer Radioactive Software is doing with its alternative historical take on the Civil War.

Gettysburg: Armored Warfare is a multiplayer only title exclusive to Steam that lets up to 64 players battle it out in Deathmatch. There are 14 controllable units, everything from simple ground soldiers, tanks, ships, zeppelins and more. It’s quite the sight to see a steampunk solider walking around with a mini-gun attached to his arm!

Gettysburg also features a real time strategy mode with Army Skirmish. Here, up to four players will take control of 192 units each as they try to capture the various control points on the map. There will be four maps at launch, each measuring 9×9 kilometers in size. There’s going to be a world editor too so you can change any number of things such as the terrain to where the spawn points are located. You can then upload your custom maps to share with the Steam community.

You can expect an experience system tied to the units, but at the moment it’s just a cosmetic feature as it only earns you different ranks. Radioactive Software is open to the idea of the XP system actually affecting your characters skills and such, but as the team is small they’re only focusing on getting the core game out there first. Radioactive wants to be very open to the community and is looking for all sorts of ideas and feedback that can be added to the game post-release.

Gettysburg: Armored Warfare will be out sometime this March for just $9.99. Check out the video preview above for a ton more info and to see how Gettysburg looks in action.

[Special credit to Angry Joe Show and Steve Butts of The Escapist whom you can hear asking questions throughout the video.]