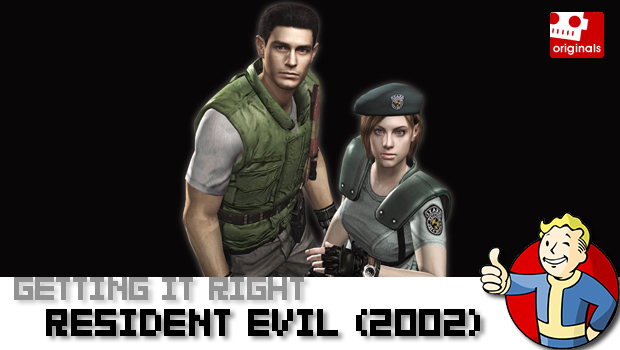 Something happened between 2002 and 2003. Gamers and critics suddenly stopped praising Resident Evil as one of gaming’s best series and started calling it dated, clunky, and boring. Take Resident Evil Code: Veronica. Upon its release, GameSpot called it the best of its genre, but by the time the GameCube port came around in December 2003, the site labeled it “obsolete.” You don’t need to go further than the port’s Metacritic page to see that GameSpot wasn’t alone.

The crux of the criticism came down to convenience. Tank controls, slow combat, and limited saves were no longer common practice. But great games have never been about convenience — they are about challenges to survive by learning your environment and abilities. Resident Evil does this very well, and no series entry did it better than the 2002 GameCube remake of the PlayStation debut.

Once and for all, let’s lay to rest this misguided talk of Resident Evil‘s being obsolete. Not only is the series still relevant, it’s timeless. The problem isn’t with the game but with the critics who have gone soft and lost good judgment. And if I sound bitter, it’s because of those critics that Capcom won’t make another title in the style of this classic survival horror adventure.

In a nutshell: In 2002, Capcom did what no developer would dare do in 2012: made a faithful recreation of a six-year-old game with a cult following. This remake added new areas, enemies, endings, and improved controls, but the biggest upgrade was in the visuals, which added the horror back into the game’s large, foreboding mansion. Though we still use the label “survival horror,” the emphasis has been taken off “survival” since the release of this gem. 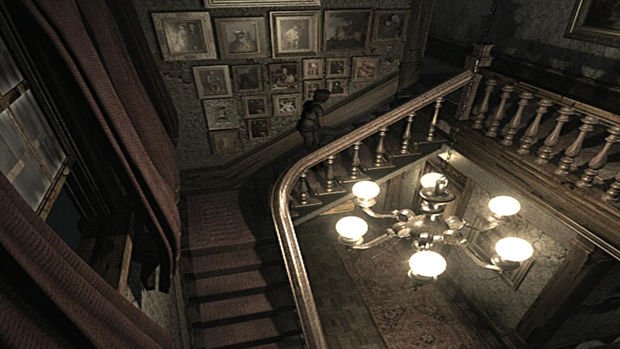 Like any great horror movie, there is an ebb and flow to the horrors of Resident Evil, and it’s all dictated by the game’s brilliantly crafted setting.

Some would love to have a mansion, but the thought of all that empty space and dark corners scares me away from the idea. Resident Evil is a game about this feeling — the unnerving fear of the unknown and the comfort of familiarity.

At the start, the Spencer Mansion is a foreboding place where every door is an invitation to evil and dismemberment. Soon, you start to map out the first floor. Next, you find brief sanctuary in the save rooms. By the time you clear out the halls, the house begins to feel like a home, and your heartbeat relaxes. The game teases you with locked doors — even worse, mysteriously jammed doors! Unlocking them to discover a shortcut to a previous area is as satisfying as taking down one of the game’s bosses. 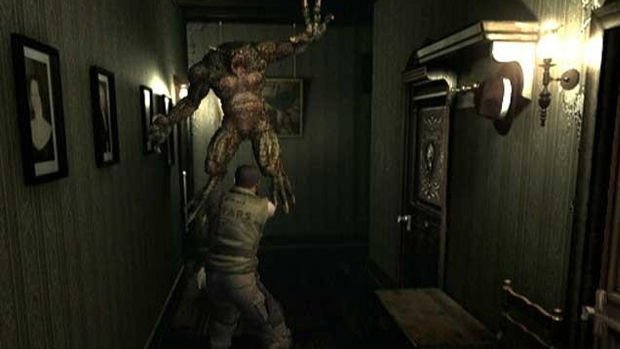 Never knowing what’s around the corner

As a culture, we live in fear of spoilers. A great surprise is as close to a holy moment as us geeks get, and there will be hell to pay if someone takes that away from us!

Lucky for you, Resident Evil is a game full of surprises, though they aren’t very nice ones. It never highlights what’s around the corner or gives the false security of a checkpoint, so you’ll be constantly praying that the next room is a puzzle and not a boss encounter. As you travel further into the game, old areas start revealing hidden items, cleared rooms start offering new enemies, and old bosses rear their head again. You’ll be wishing you didn’t leave that ammo box on the ground in that one room that you can’t remember where the hell it is and OH GOD A GIANT SNAKE FUUUuuu …

It goes without saying that surprise is essential to a good horror game. Just look at Silent Hill: Shattered Memories to see how limp a horror game can become when it advertises its next move. Resident Evil asks the player to blindly trust the game; that if the player tries their best, they will survive. But some players will soon realize that their best isn’t good enough. Just like in Dark Souls and Spelunky, making it to areas that you know others could never reach makes the journey all the sweeter.

Finding comfort in a familiar place

Resident Evil is a grueling game that isn’t shy about playing with expectations. Dogs provide literal jump scares, new enemies invade old areas, and there is a price to pay for every zombie you don’t fully dispose of. Along with the horror of feeling locked outside areas and trapped within others, there is a simple joy to playing virtual cartographer. For those God of War and Super Metroid players who feel giddy after fully exploring an area, Resident Evil will make them pee their pants — assuming they don’t shit themselves first.

Finding solace in the save rooms and main hallway is a unique feeling that I don’t get from any other series. By the end of the game, you feel like you know the mansion inside and out, making you feel empowered. Or maybe that’s just the grenade launcher with 18 acid rounds talking? Regardless, you feel like you’ve been on a wild ride as you return to familiar places and reflect on all the horrifying events that have transpired. The game allows you a moment to catch your breath before giving you another reason to let it all out in a scream, again. 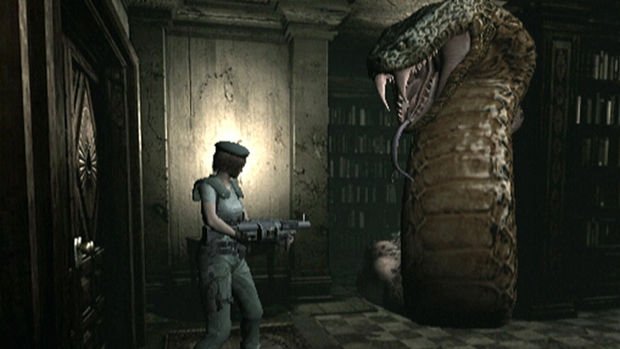 Maybe it’s the fault of marketing and media exposure, but the branching paths of Heavy Rain and Mass Effect never shocked me in the way those of Resident Evil do. While it’s clear that those two games were designed around the branching path concept and wanted to make the element of design clear to the player, Resident Evil is a game about psychological fear and withholding information.

There are several times in the game where the player can choose drastically different options, but you’d never think you had an alternate choice unless you read about it in a FAQ. Even when you do read a guide, you’ll often find yourself lost. “Wait, where is the automatic shotgun and why am I carrying this broken shotgun?” you’ll ask. Or, “Why did I never have that boss fight at the end?”

In addition to these narrative splits, there are some clever alternate approaches one can take in the combat. There is the binary choice between evading and fighting with the common zombie, but things become more interesting with the boss fights that often offer a non-combat approach if you go the extra mile in your puzzle solving. On top of all this, the game has two main characters to play as that offer different dialog, weapons, and changes in the narrative.

Unlike Heavy Rain and Mass Effect, by the end, I felt like I played the game the only way it could have been played rather than carving out my own version of it. Instead of wondering if I played the “best version,” I was left wondering if there was even another version at all. 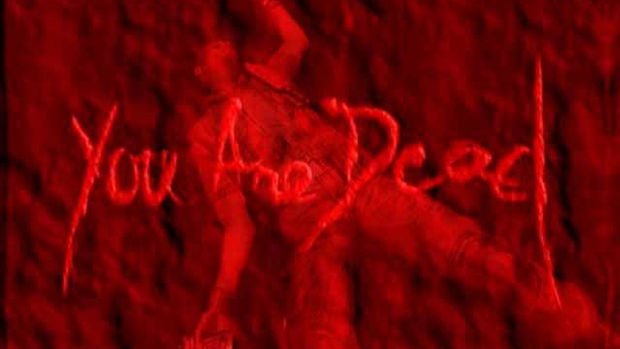 The greatest fear for a Resident Evil player isn’t zombies, but running out of ink ribbons. These ribbons are hidden throughout the game and are the only way to save progress. Since there are only 30 or so throughout the 11-hour game, and since you’ll often be lucky to have more than one in your inventory, it’s a constant source of tension that makes every unopened door and uncleared hallway into an unbearable threat.

There is a compromise the player and developer make with such a restricted save system. Yes, it inconveniences the player, but it also heightens the fear and pleasure of the game. There is no moment more tense than going an hour without saving and being stuck with low health. But, there is no moment more satisfying than finding a save room, right when you thought you’d have to restart the entire game.

For the brave and willing, the ink ribbon system will give you some of the most memorable gaming moments ever.

Resident Evil was a landmark title in 1996 that ushered in mature console horror gaming. By 2002, its impact had been weakened, but Capcom addressed this with this nearly flawless remake. The lightning, detailed CG backgrounds, and high-polygon models still look fantastic and keep the game from feeling goofy in the way the original PlayStation games are now.

For those who think they can handle the challenge and scares of this classic, you’ll need to readjust how you approach games. Resident Evil was never the norm. Its pacing and unforgiving design limit its audience, but all of its misperceived flaws are essential to the experience. The controls aren’t sluggish but intentionally slow, making intense moments more intense. The ink ribbon system and limited inventory ask players to make constant sacrifices that add weight to their actions.

It’s clear that Resident Evil is an abnormal, obtuse game, but everything about it adds up to one of the most unique, memorable horror games of all time. Resident Evil (1996) may have spawned the genre, RE2 may have broadened its scope, but this remake is the crown jewel of the genre.