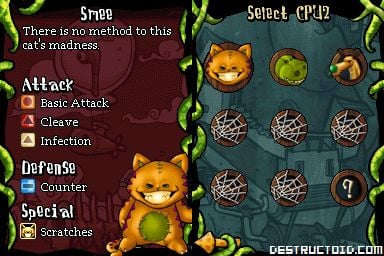 Last week, THQ sent us some screens of a curious little out-of-the-blue puzzler for the Nintendo DS called Dropcast.

The story: a maladjusted little girl with a vicious imagination named Ingrid can’t seem to make and keep friends. Upset, she turns to animating a rambunctious and mischievous group of her own stuffed animals.

A curious set up for a puzzle game, but it succeeded in catching my eye. So much so, in fact, that I asked THQ if they’d let me spent some time with the game. They were hesitant at first, but when I hinted that I’d send my own stuffed animal — the vicious-but-cuddly rabbit, Boo Boo — after them, they quickly changed their tune.

Hit the jump for some hands-on impressions and details of Mikoishi Studios’ Dropcast. 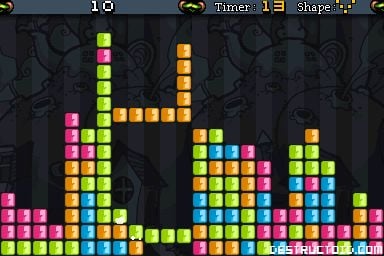 The game is broken up in to two modes: Ingrid’s Curse and the more “story-oriented” Battle Royale. Both modes, however, share a similar game mechanic that you might be familiar with from games like SameGame, Bubble Breaker, or — for all of you fancy folks with your iPhones — iDrops. The concept is simple: tap like-colored adjoining blocks to remove them; block no longer supported will fall into spaces created. Repeat.

Dropcast’s “Ingrid’s Curse” has you clearing block clusters of six or more to send a pre-determined shape set (shown in the top right corner) down on the other screen. The object is to create horizontal lines which will then clear and score you points. Blocks will rise up on your screen, giving you new colors to play around with; if either side is filled to the top with colored blocks, you lose.

“Ingrid’s Curse” is a curious mode, and it took me a few games to really understand how it works. My first game ended with an extremely lousy and embarrassing score, somewhere in the range of 200 points. By game three or four, I was rocking it, with scores of over 2000 points not being a problem. The key is that where you tap the screen to destroy the block clusters will determine where the blocks will drop on the other opposing side. 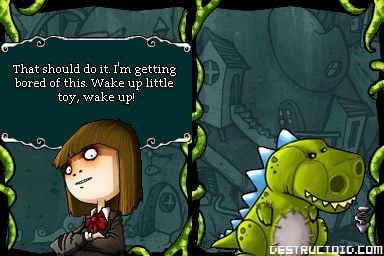 Watching and having to manage both screens is nerve wracking, since if either side is filled with blocks, you’ll automatically lose. Breaking blocks on one screen could save your ass from a “Game Over,” but it could also potentially drop a game-ending set on the opposing screen. I found it extremely difficult to manage, but it became easier the more I played, which made “Ingrid’s Curse” both frustrating and addictive.

The game’s other mode, “Battle Royale,” is a “versus” affair and the game’s main mode. Here, the object is to fill your opponents screen with blocks by “casting spells.” The game features eight different characters, like a creepy cat with an electric razor or a dog with bad posture, each with his or her own spells and attacks.

For example, breaking a cluster of orange blocks will trigger a basic attack which sends block over to your opponent’s side of the screen. Putting together a cluster of tan blocks will trigger an “infection” attack, which will drop a single block that when dropped on a block will turn all of the blocks of the same color “dead” and temporarily unusable. Attacks can also be countered by clearing blue blocks bearing a minus symbol, but only if they’re triggered at the appropriate time. When you break a particularly large cluster of blocks, a single special icon will appear on your screen; breaking it will activate a devastating special move. 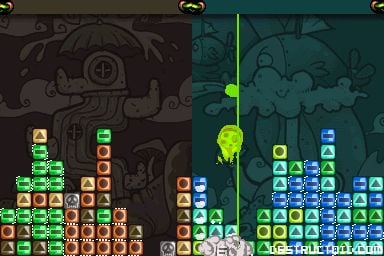 While I didn’t compete head-to-head with a human player, some of the matches versus computer controlled opponents went on upwards of 15-minutes, while some ended rather quickly. I found some of the spells to be particular useless and frustrating. One in particular caused an entire vertical row of your opponent’s blocks to disappear; considering that the goal of the game is to have your opponents blocks reach the top, a spell like this seems pointless. Not triggering it at certain points didn’t seem possible, either, as there are points in the game where you simply must destroy some of your own blocks in order to not lose.

Dropcast is simple, but quite addictive. It doesn’t seem like it will be the perfect puzzler, and I’m a bit disappointed that the game’s adorably sinister artwork isn’t more tightly weaved into the game (in-game you’re mostly staring at colored blocks). Still, it does look like a nice time-killer, and considering it’s being published by the ValuSoft division of THQ, it shouldn’t hurt your pocket too much.