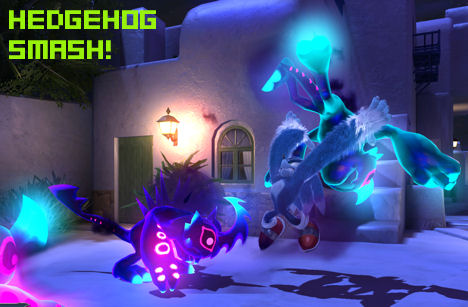 Sega buzzed us over all the latest Sonic Unleashed screenshots, which we are now sharing with you because we’re not greedy. The new screens showcase Sonic’s new “werehog” alter ego as he partakes in some heavy duty combat usually unbecoming of the little blue speedster.

Also on show are the stretchy-limbed acrobatics that the werehogs will need in order to climb around the environment. Funnily enough, I get a Prince of Persia vibe from some of the images, as Sonic sidles along ledges and nagivates thin walkways.

I’m still not entirely sold on the game as a whole, but I definitely don’t have a problem with the werehog stuff. I know some people think Sonic is always about speed, speed, speed but I disagree, and if there can be some Persia-esque envionmental nagivation and elastic-armed action platforming to go with my loop-de-loops, I’m not going to complain …

… provided it’s all GOOD, Sega. You hear me?