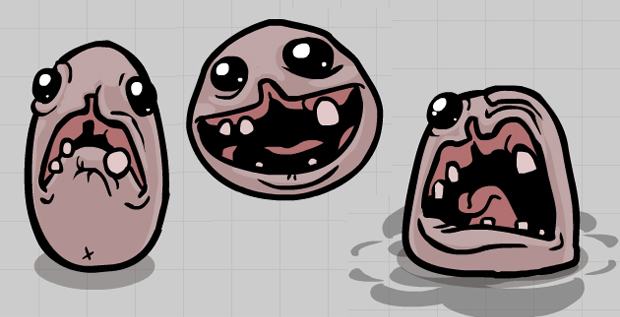 The Binding of Isaac is the first semi-solo project from Edmund McMillen (co-creator of Super Meat Boy) since Twitter got to be a thing. As such, he hadn’t opened his own Twitter account until now. With a fresh game to promote and the love of all mankind in his heart, Edmund has rectified that situation. He’s on Twitter now, solo-style, and he’s already posted three exclusives pieces of the Bindinding of Issac artwork on his feed.

I’m getting a definitive cute-Castlevania vibe from these characters. The Duke of Flies, one of four randomly encountered bosses of the game’s first level, reminds me a lot of Beelzebub from Castlevania: Symphony of the Night. The other boss, Monstro, is clearly a message from Edmund that all cute people with bad teeth are bad people.

I guess we can add the dentally impaired to the list of people that Edmund McMillen hates; a list that already includes Wii owners, Vegetarians, Microsoft, Christians, animal rights activists, PS3 owners, Pagans, Tom Hanks, fetuses, men, Mac users, women, criers, and the nude. It’s a wonder than he hasn’t shown up to your house and pooped on your salad.