If you think that “steampunk dungeon crawler” sounds like Occam’s panty/brief-dropping sludge rock jug band, you would of course be correct. It also happens to be the genre type of FatBot Studio’s promising indie debut: the grid-based, first-person role-playing game Vaporum.

Picture the environments of Almost Human’s Legend of Grimrock reimagined in industrial Art Deco, then fill those gorgeous dungeons with creaking, whirring steam/dieselpunk enemy types and replace the familiar experience point/ability-based leveling system with a more streamlined, gear and gadget-oriented structure. That’s essentially what the studio is shooting for.

As you can see in the latest pre-alpha teaser above, even at this early stage, Vaporum is striking. The lovingly crafted Art Deco aesthetic combined with a steampunk setting does wonders, in my mind, to help set it apart from other titles in the relatively underserved subgenre.

As I touched on briefly, Vaporum implements a “simplified character development system.” While less complex than what we may be used to in typical RPG character progression, the studio says that by streamlining it in this way, it hopes to “make every player’s choice matter” without bogging you down in attribute tweaking and restrictive class-based abilities.

After learning as much as I could about the title from Vaporum‘s development blog, I decided to contact the studio to see if I could find out more about the game’s character progression systems and items. The studio’s designer and producer, Tibor Repta, quickly provided a wealth of detailed new information about the game.

Repta likens Vaporum‘s exoskeleton rig to the HEV suit in Valve’s Half-Life. However, once donned, you’ll use a substance called Fumium that you acquire from slain enemies and Fumium fuses found in crates to “wire up new circuits on the suit, upgrading its built-in abilities.” While the original idea for the exoskeleton may have been inspired by Freeman’s wardrobe it makes me think of the Big Daddy worn in BioShock 2. 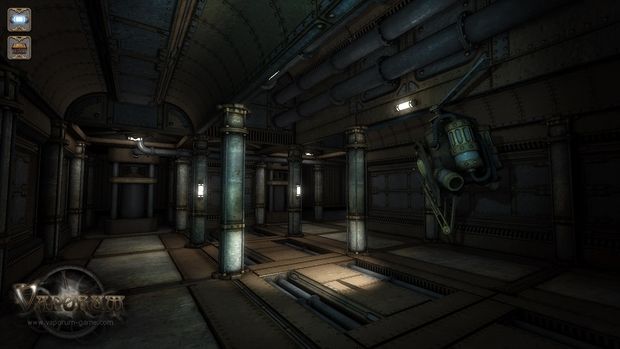 Repta goes on to say that Fumium will fill the same role that experience does in other role-playing games. Once you acquire enough of it, you’ll then level up and earn one point that you can assign to the suit’s various skills. The skills include things like melee and ranged combat, defenses, energy restoration, engineering, and salvaging. Repta points out that “these skills are passive and only increase your numerical output in offense, defense, and utility.”

He notes that using a passive upgrade system might be uninteresting on its own, so they’ve paired it with a system referred to as traits. “After investing a certain amount of points into a skill, you can then choose from one of two possible traits. Traits are interesting because you can only choose one of two during one play-through” and they add something unique to the skill you’re upgrading. Repta mentions that trait options are mostly contradictory so your choice really does make a difference in how you play.

Items are another aspect of Vaporum that Repta wanted to detail for us. He says that you gain access to a variety of them including melee and ranged weapons, armor upgrades, consumables, quest items, blueprints, and materials, and they’ll work like you’d expect them to. However, there is one particular item type that stands out: gadgets.

“You put a gadget into a specialized slot in your suit and it grants you an active skill. Like the Discharger you can see in the video.” You could say gadgets fill the role that spells might in other titles; however, to use them, you’ll have to find them first. 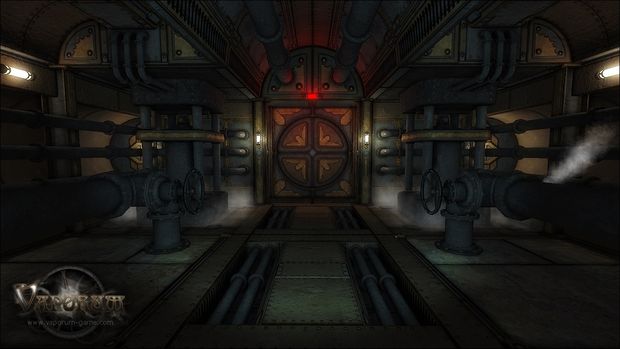 Currently, the team is in search of finances to begin full-scale production of the game. Repta mentioned that the team is “playing with the idea of a crowdfunding campaign,” but the current state of pessimism towards unknown developers going that route has left the group feeling somewhat discouraged and skeptical about the idea.

No matter what path they end up choosing to move this fascinating project forward — be that aligning themselves with a publisher, taking the game to Steam Early Access, self-funding, or launching a Kickstarter campaign — I wish Repta and the them at FatBot the very best of luck in seeing the project come to fruition. Even in pre-alpha, Vaporum is looking great, and I could easily see myself pouring hours into an intriguing title like this.