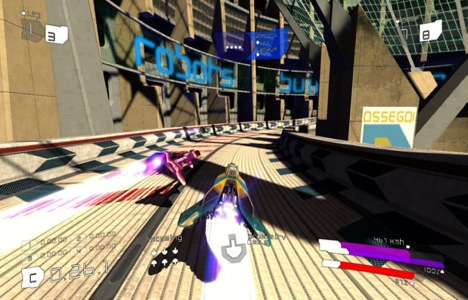 Apparently, in the future, people don’t have epilepsy. The latest information out of CVG is that the long-awaited PSN title has been severely delayed. In fact, the game “[failed] the epilepsy tests so much that it has to be re-engineered.” The statement makes you wonder how many people dropped and kissed the floor while trying to play the game during the testing process.

This epilepsy stuff always gets to me. Games typically have very clear and distinct warnings on both the title screen and in the manual stating they can cause photosensitive seizures. It’s not like this is some big, insidious secret of the industry. My guess is that part of this is political, and a direct response to the lameness that is Parliament when it gets a whiff of misgivings in games.

Just for fun, I uploaded the E3 trailer for WipEout HD after the break. I didn’t get a seizure from watching it. Did you? For those of you with sensitivities to light, fast moving objects or epilepsy, don’t watch the video or you’ll have a seizure.