That’ll teach them for crossing the path of this kusoge

Nineteen ninety-five was a rough time for games. The market was transitioning to 3D graphics, and there was a lot to figure out. To prove this, you need only look at the earliest PlayStation games; the ones that came in those ugly cardboard clamshells. Games like ESPN Espn2 Extreme Games and the original Twisted Metal plainly show the difficulties developers had with the new hardware. Warping textures, awkward physics, and…

Oh, hold on a moment… 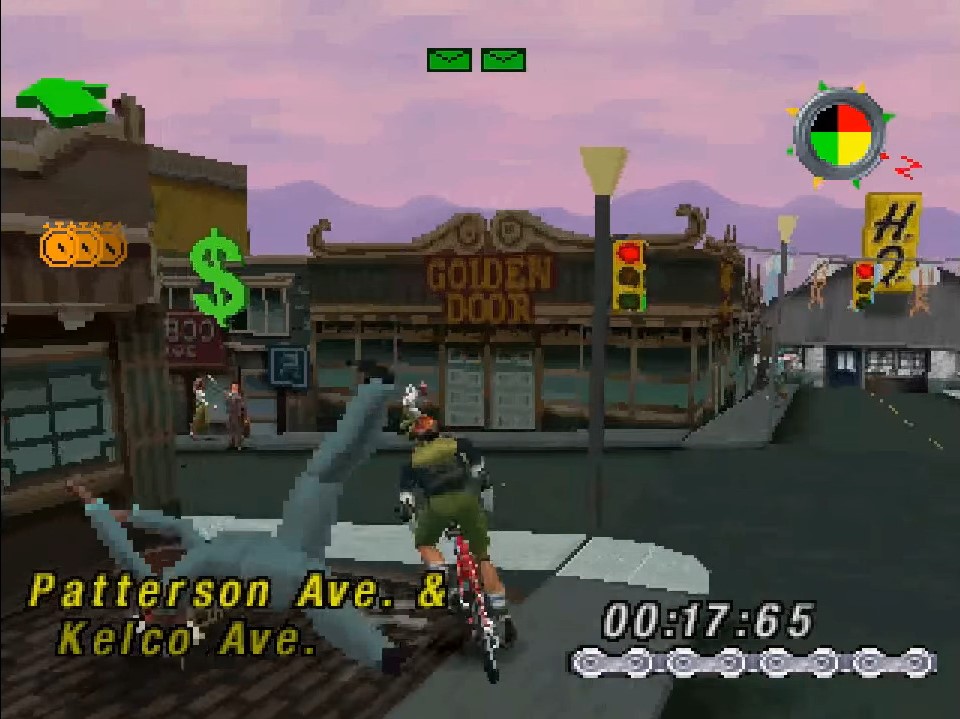 There’s something dangerously exciting about digging through the festering pits of kusoge. While some of these articles are indeed explorations into past trauma, others are games I picked up based on reputation. Then there’s a third category which is games I come across while browsing through online storefronts and I think, “that sounds compellingly stupid, I must have it.” Courier Crisis is one such game.

Just look at it. The concept behind it is actually pretty sound; you play as a bike courier going about their job. You can sell me on the premise alone, if Bike Courier Simulator was announced for Early Access, I’d be on board.

The approach in Courier Crisis is a humorous one. You tear through the streets and follow an arrow to the sender, then follow the arrow again to the recipient in a set amount of time. Your reward is based on how quickly you can do this. This may sound a bit like Crazy Taxi but two years earlier, so sit down for a moment, because this news is going to be devastating: It’s not. Missions are practically linear. One package. One recipient. Pick up the package, deliver it. If you fail, it’s time to try again and find a better route. 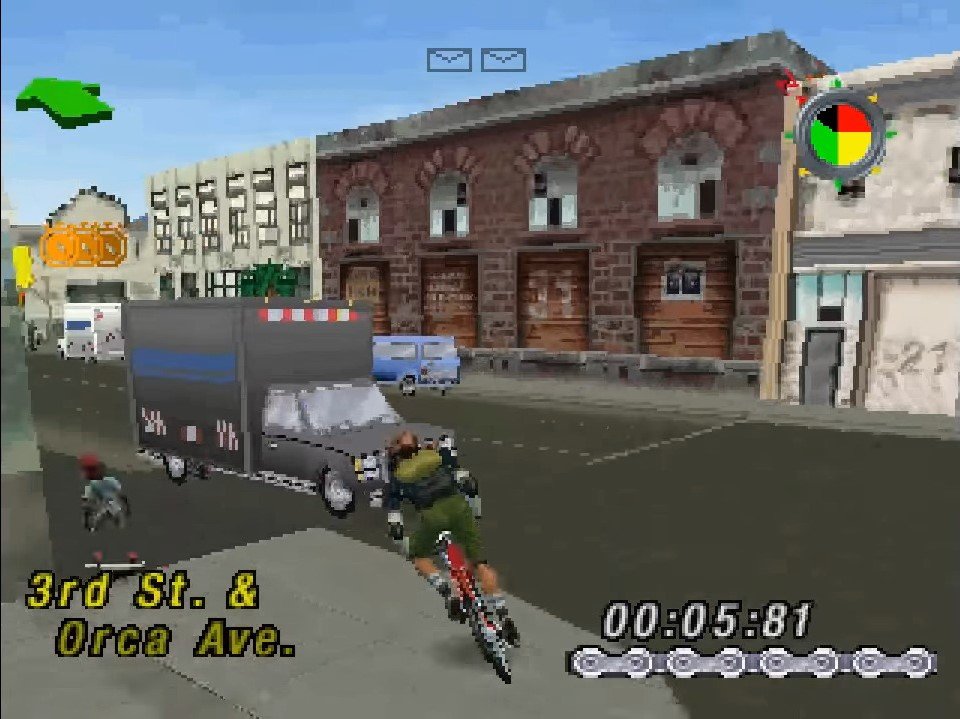 There’s more to it than that, but the game isn’t going to tell you. Any strategy you had is just going to start failing you at about the fifth level. What it wants you to do is activate and collect power-ups by doing stunts. The most useful one just adds time to the clock, while others let you boost or jump higher. You can do most of them off flat ground, so the trick is just to remember to do them. Hopefully you have the instruction manual, by the way, because that’s where you find all the information on stunts and power-ups. Mine is beaten black and blue, but fortunately it has the section on stunts, otherwise I may have never learned about them and their use.

Level five hits you like a wall. The first few stages are stupid easy with your bike’s horrible steering being the only real obstacle. There’s actually a button you have to press to steer harder, which is funny, because someone on the development team decided there would be times when you don’t want to steer as effectively.

The problem is that the early stages are too easy to be interesting and the later stages are too difficult to be bothered with. They’re doable, don’t get me wrong. You have to memorize the route and get a near flawless run on them. It’s just two extremes of the suck spectrum. 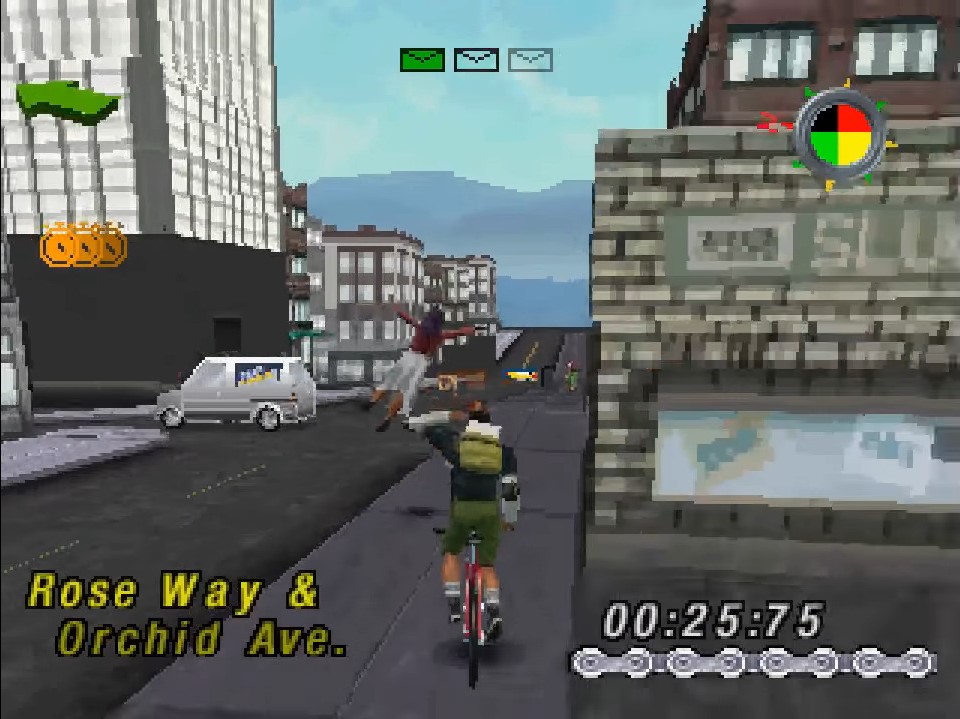 Each level takes place in a hunk of city with multiple routes and alleyways. There’s the Civic Center, Chinatown, the Industrial District, Skid Row, and the Waterfront. Before you get too excited, they’re all practically the same messes of 90 degree turns and perfectly straight streets. Hazards will only appear in certain areas, like the strings of lanterns that knock you off your bike when you jump from beneath them in Chinatown. It’s hard to tell because of how low-detail the sprites are, but I think the pedestrians just change from mission to mission. I’d swear I saw mimes in Skid Row and Elvis impersonators in Chinatown, but it’s so hard to tell.

That’s because the graphics, as stated previously, look like a release window PS1 game. I’m not just talking about the fact that the characters are all 2D sprites, but also how low detail and angular the world is. It’s actually disorienting because, even beyond the texture warping, the screen seems to stutter and shake noticeably like the camera is tied to a broom and stuck to your rider’s ass. I got used to it eventually, but I can only imagine it’s going to cause motion sickness in some people. 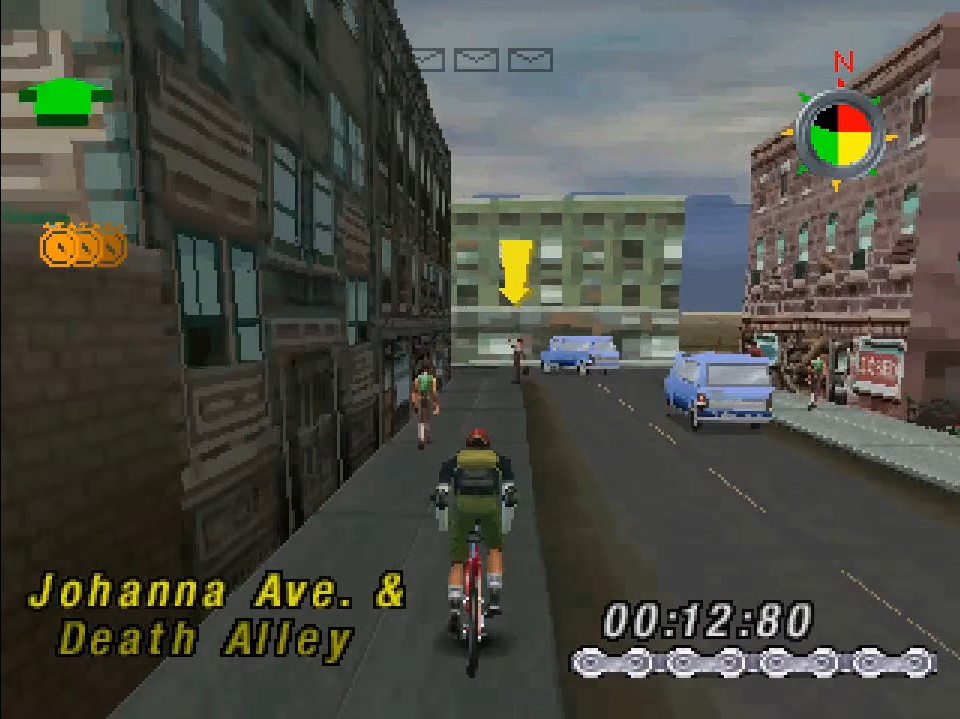 Even if you get used to the graphics, there’s horrible collision detection on top of that. In one of the early levels, I got stuck in someone’s garden, and there were plenty of instances of hitting something I was well clear of. It can be quite chaotic and also frustrating as you bounce around the environment while your boss tells you what size and consistency of shit you are. You’ve got a health bar, too, which leads to a game over if you let it deplete. You’re more likely to just run out of time, but it’s important to note that sometimes the game just wants to beat you down.

Speaking of beating down, for whatever reason, Courier Crisis really promotes violence against pedestrians. Even a lot of the game’s promotional art shows the protagonist sucker punching some dude on the street. For what reason? In normal gameplay, a lot of the hapless filth that wanders the sidewalk will throw punches at you for no reason. Chances are, you won’t spend a lot of time riding on the sidewalk because you live in fear of hitting the invisible force field that surrounds trash cans. The people also don’t do much damage to you and don’t even cause your rider to flinch. However, it tallies up the amount of “pedricide” you commit at the end of each level for no reason aside from bragging rights.

For some reason, killing pedestrians was the height of video game comedy in the ‘90s. It was a selling point. Was there any reason for playing the original Grand Theft Auto games aside from running over pedestrians? What was more disappointing than the fact that people dove out of your way in the Driver games? Carmageddon was pretty centrally focused on the concept. Did we really hate people who don’t own vehicles that much? Was this Big Oil’s attempt to promote the elimination of the poor and environmentally conscious among us? Makes you wonder. 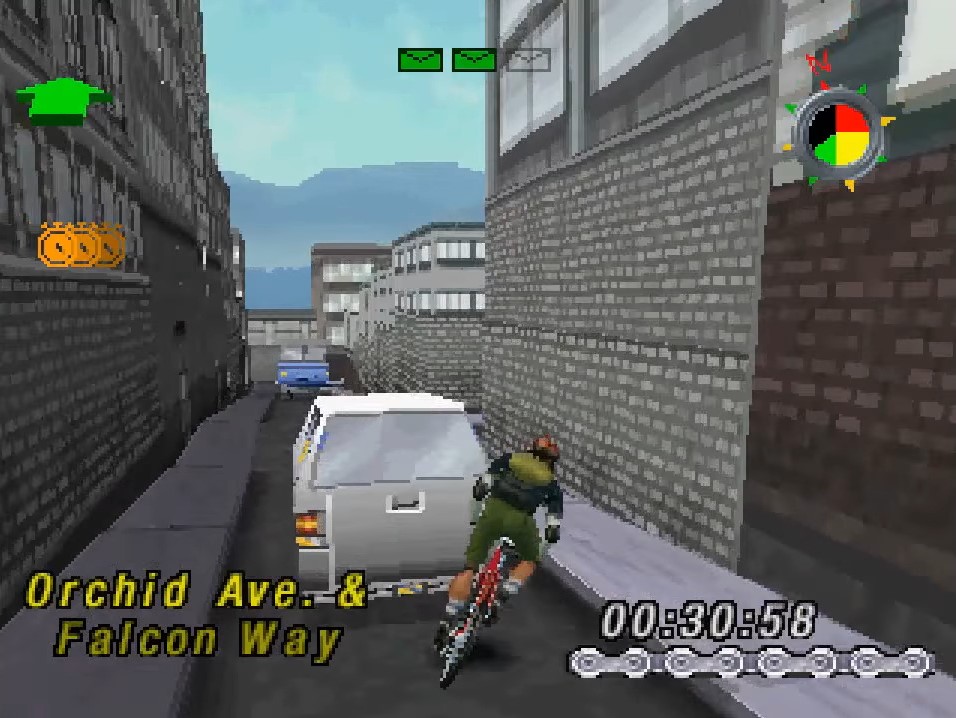 Courier Crisis is one of those games that give you glimpses of fun between mountains of impassable agony. Like I said, the concept interests me, but the game is half baked. There are three levels of reward for deliveries depending on speed: green, yellow, and red. The levels are so thrown together that some are dead easy to green and others are literally impossible. One of the demo videos shows a guy leaping, boosting, and tricking through the streets flawlessly, and even he gets a yellow delivery on the level. Something’s wrong here when mediocrity gets demonstrated before the game even begins.

I don’t think it matters too much. Your reward for gaining more money is better bikes, which makes sense. However, while each has an ascending price, you’re not actually spending your money on them. No, you’re just buying them as your cashflow passes a certain threshold. So, really, it’s more like leveling up. It removes the risk and reward idea of saving your cash for a better ride versus just buying the next best thing when you can afford it. Here, there’s no point in not getting the next best bicycle. 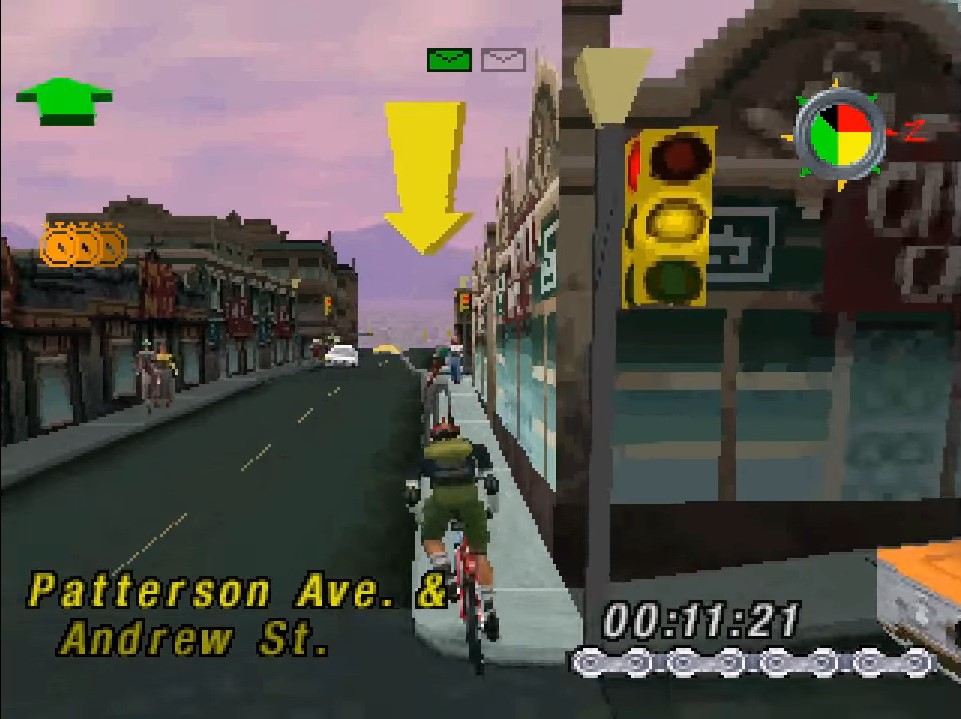 I’m honestly not sure about Courier Crisis. It seems a little too creative to just be shovelware, but it’s so poorly executed that I can’t help but think there was a shortage of something here. Whether it was time, budget, or talent, I can’t really say, but I’d have trouble believing anyone was happy with this release. I’m still rather surprised that I missed it, since it was definitely within the prepubescent style of humor I was rocking at the time.

There is a spark of a good game within, however, someone just needs to go back to the whiteboard with it. A mix of Crazy Taxi and Tony Hawk’s Pro Skater could be a reasonable formula to work with. There were a lot of loose screws with this title, but with the slate wiped clean, something good could come from the idea. As it stands, though, there’s nothing particularly redeeming about Courier Crisis. It’s a delivery you probably don’t want to accept.