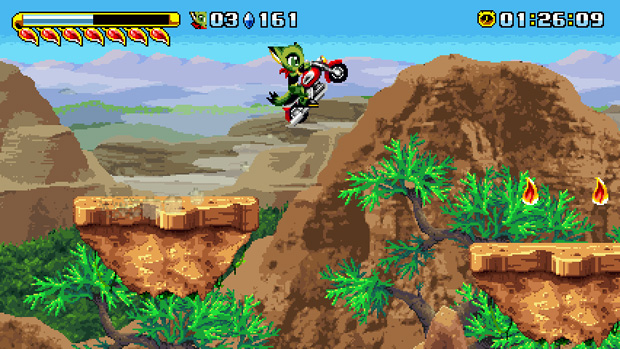 The graphics have been tightened up on Level 3

Earlier this year, throwback platformer Freedom Planet by GalaxyTrail Games blasted through its Kickstarter campaign and almost all of its stretch goals. If you haven’t been following, Freedom Planet draws heavily from the SEGA Genesis era, most obviously from Sonic the Hedgehog but with nods to others like Rocket Knight Adventures. It fondly recalls a time when animal mascots reigned supreme and playing games early on Saturday morning was something to look forward to.

A new demo for PC and Mac was just uploaded to the Freedom Planet homepage. I didn’t have many major complaints with the original demo from last year, but this update highlights many other issues that I’ve only just noticed in hindsight. The graphics have been given an enormous bump, with far more defined backgrounds and objects as well as all new character sprites. The HUD has also been overhauled, and now your special meter fills automatically, allowing for faster gameplay and an expanded set of abilities.

The wildcat Carol Tea, one of the demo’s two playable characters, now has a motorcycle that she can summon whenever you find a gasoline container on the ground. She can ride it seemingly indefinitely — it won’t dissipate until it has absorbed a decent amount of damage. Bitchin’.

Download the demo and vote for the game on Steam Greenlight if you haven’t. Freedom Planet is targeting a 2014 release at the latest.