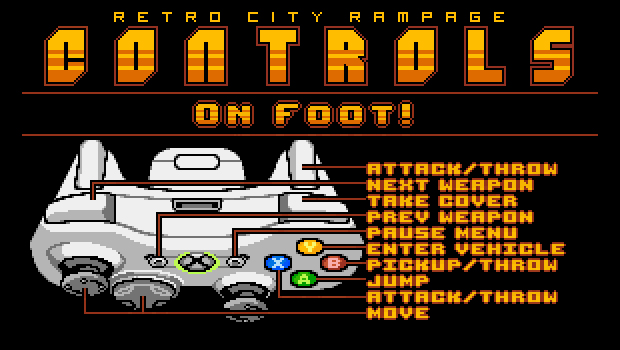 I’ve been almost done with a preview of Retro City Rampage for a while now. I’m waiting until a little bit closer to the game’s release to post it because I want you to read it a little closer to when you can actually play the game yourself, and because I’m swamped with deadlines-related stuff that just can’t wait.

In the meantime, I’ll just tell you a little bit about the game’s controls. As you can see, they’re not that simple. That’s OK though, because they’re a big part of one of my favorite aspects of Retro City Rampage; the combat.

In Grand Theft Auto-type games, the combat pretty much consists of punching people or hitting them with a car until you get a gun. after that, you shoot people until you run out of ammo. Maybe there will be a chainsaw in there somewhere, but that’s about it. It gets to feel like a one note tune pretty quickly. In Retro City Rampage, you can do all that too, plus jump on guys heads, and/or pick them up and toss them around in true Mario style, and that’s not even counting the Tanooki suits, Bionic Arms, Sonic shoes, POW blocks, and NES Zappers you pick up later.

There are so many options for how to take on a given combat situation that it’s hard to imagine the game ever getting boring. What I’m trying to tell you is, Retro City Rampage is awesome and I want it.