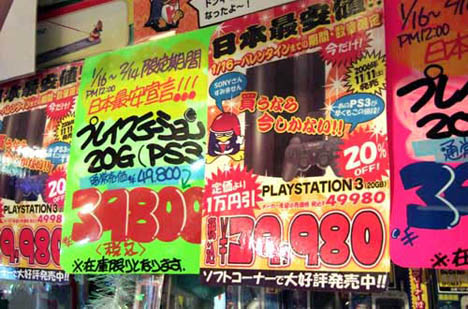 Not only is the new PlayStation 3 considered a little expensive for a console here in the States, but it seems like the PS3 may be a little too expensive for the peeps in Japan as well. Maxconsole, by way of Akibablog.net, shows that at least one retailer in Japan has cut their PS3 price by 20%. Maybe they’re making room for a different color DS Lite that will inevitably drop.

PS3 sales in Japan have not just chilled but FROZEN. The problem of PS3’s not selling in their native motherland has got so bad that retailers are cutting their prices by as much as 20% in a bid to move the systems. As soon as PS3 gets some good games, expect things to heat up!