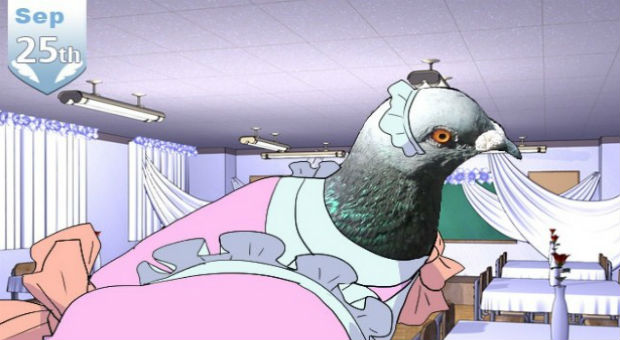 Don’t be hatoful, be loving to your pigeon beau

You’ve probably already played it, but Devolver Digital and developer Mediatonic are bringing the “hardcore pigeon dating sim” Hatoful Boyfriend to a PC and Mac near you this summer. Originally released in 2011, it became a cult following among visual novel enthusiasts (such as yours truly), and now it’s receiving a remake for a brand new audience — now there’s no more scrambling for the limited Japanese release and a brand spankin’ new edition on the horizon.

You play the only human in St. PigeoNation’s school for birds, where you’ll manage your own school schedule while pursuing several gorgeous pigeons that all want to be your one and only. Like any self-respecting visual novel/dating sim, there are multiple branching paths to take so you can make sure you end up with the pigeon that’s right for you.

Hatoful Boyfriend is only playable at E3 2014 this year by appointment only, but it’s releasing later this summer on PC and Mac via Steam, Humble, and GOG, as well as other digital retailers. This year has been truly kind to us visual novel lovers. I hope it lasts.