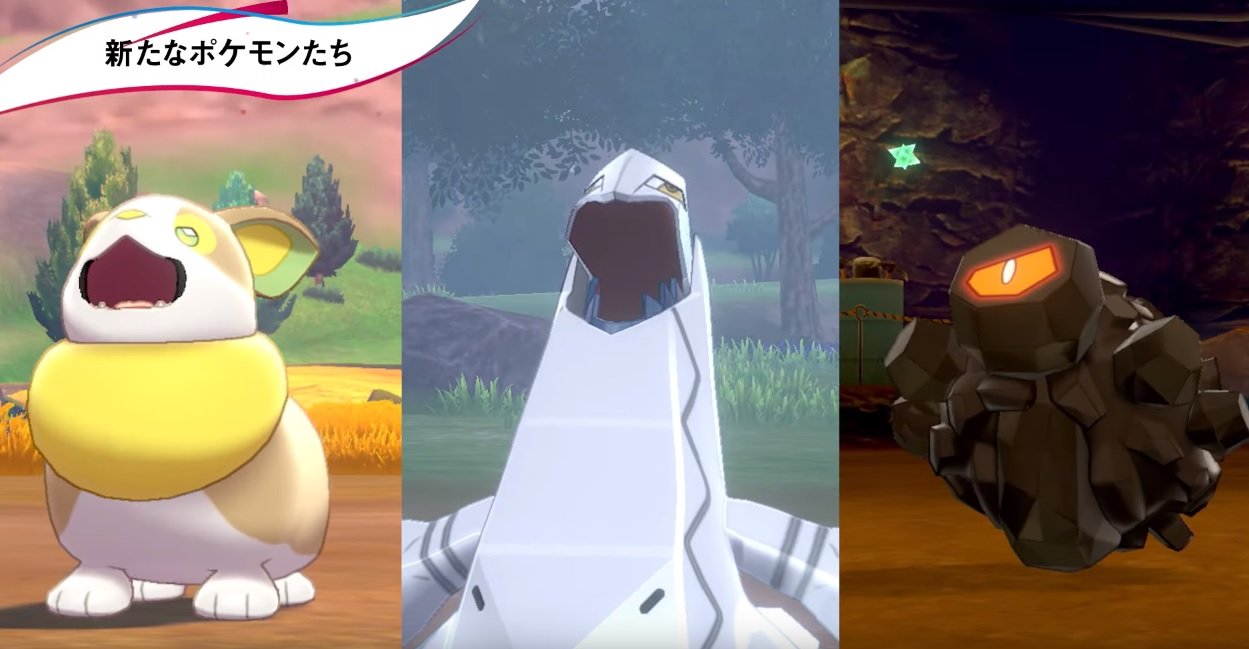 The Pokemon Company just dropped a new Japanese trailer for Sword & Shield, and among lots of new areas, we also get a good look at three new Pokemon (which were slightly teased during the E3 demo). In order of their appearance in the video we have Yamper (the dog), Rolycoly (the rock) and Duraludon (the dino). Alcremie (the cake-looking creature) also shows up later in the clip.

The next segment involves gym life, and centers around the glitzy new blood sport spectator-fueled gym concepts. That portion showcases more of the Dynamax (read: Kaiju Pokemon) mechanic, which now allows creatures to attain new forms with “Gigantamax,” transformations, similar to the Mega Stones from X & Y. Based on the English trailer, each version of the game will also have exclusive gym leaders.

Pokemon Sword & Shield will arrive on November 15, 2019, exclusively for Switch. As a reminder, it will not have a National ‘Dex this time. You can catch both the Japanese and English trailers, and read official info on the Gigantamax forms below.

The power of Gigantamaxing has allowed Drednaw to stand on its hind legs and become bipedal. From its standing position, it can come crashing down on opposing Pokémon and crush them with its massive body. Drednaw normally keeps its neck retracted within its shell, but when it attacks, it can rapidly shoot its neck out. Its jaws are also incredibly strong and can easily bite through huge metal towers. The strength of its jaws combined with the force of its neck gives Drednaw the power to punch a hole through a rocky mountain in a single strike. Water-type moves used by Gigantamax Drednaw will change to G-Max Stonesurge. G-Max Stonesurge doesn’t just deal damage to an opponent—it will scatter sharp rocks around the opponent and cause Pokémon entering the battlefield to take damage.

Corviknight uses its massive wings to catch updrafts created by Gigantamax energy to hover in the air while it battles. The armor on its body has been reinforced, so attacks from Pokémon on the ground barely have any effect. Gigantamax energy has caused the armor covering Corviknight’s wings to separate and become blade birds, capable of flying independently. Flying-type moves used by Gigantamax Corviknight will change to G-Max Wind Rage, which removes any effects of moves like Reflect, Light Screen, Spikes, and Electric Terrain that the opponents may have.

The cream pouring out of its body hardens when subjected to impacts—the stronger the impact, the harder it becomes—giving Alcremie an impressive resistance to physical attacks. Additionally, the giant “Berry” decorations on Alcremie’s body are as hard as diamonds, and it’s said that most attacks won’t even be able to leave a scratch. Alcremie will launch high-calorie cream missiles around itself to attack its opponents. Any Pokémon that touches this cream will be filled with energy and euphoria but at the same time will fall into a state of complete confusion. Fairy-type moves used by Gigantamax Alcremie will change to G-Max Finale, which will heal all Pokémon on Alcremie’s side while dealing damage to an opponent.